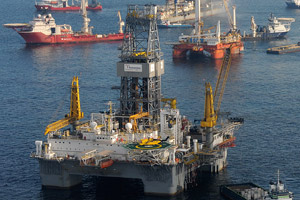 Last week, BP said it aimed to stop its Gulf gusher no later than July 27—which also happens to be the day that the company reports its second-quarter profits. “In a perfect world with no interruptions, it’s possible to be ready to stop the well between July 20 and July 27,” Managing Director Bob Dudley told the Wall Street Journal.

Talk about hedging your bets.

BP’s stock prices have perked up a bit since it announced that the first of two relief wells could be finished in the coming days. The Coast Guard, however, has been unwilling to rubber-stamp Dudley’s estimate. “If the oil is coming up through the outside ring and you seal that first, you can obviously improve on the timeline,” Admiral Thad Allen, the government’s point man for the disaster, told ABC News. “But we won’t know that until we actually penetrate the well bore.”

BP officials have been guardedly optimistic now that the company has fit a new cap on the spewing pipe and the relief wells are nearing their mark. Tests on the cap resumed late Wednesday after a temporary delay, although the relief wells—one of which has made it to within four feet of the runaway well, BP says—remain on hold. Officials still need to test the integrity of the wellbore to ensure that the relief attempt doesn’t make matters worse.

You can hardly blame skeptics who ask whether this latest prediction is yet another case of BP donning rose-colored glasses in public. Not long ago, after all, we were told that a “junk shot” (a.k.a. “top kill”) seemed like a good bet. (It wasn’t.) And while a relief well may indeed be the most promising option, completing one is far from simple, industry experts say. This effort could still take weeks, possibly months—assuming it works at all.

BP has offered conflicting completion dates. The relief-well application it submitted to the Minerals and Management Service (renamed the Bureau of Ocean Energy Management, Regulation, and Enforcement) anticipated that the spill would be stopped by July 15. In public, the company was saying mid-August. Even BP’s Dudley conceded that this new date—July 27—is “unlikely” due to variables beyond the company’s control—like the weather.

Rep. Ed Markey (D-Mass.) sent the company a letter last week asking officials to clarify the date that they actually expect to complete the well. He’s also pressuring BP to release information about the well’s integrity that the company has been keeping under wraps.

If the new cap works as advertised, it should capture a lot more of the oil still erupting from the blown-out well at a rate of 35,000 to 60,000 barrels per day—depending on whose estimates you use. But the relief well, experts say, is the company’s final chance to permanently halt the flow of oil. “This is a challenge, there’s no doubt about it,” says David Rensink, incoming president of the American Association of Petroleum Geologists. But “I don’t know of any relief-well operation that has been a failure.”

It’s worth checking out The Oil Drum, an energy-industry forum, for its illustrated explainer about how the relief well works. To put it simplistically, BP is drilling two new bores adjacent to the main well (one as a backup). Once in position, the drillers will move horizontally and tap into the main well. Then they will use the new pipe to inject thousands of gallons of heavy drilling mud into the old one. The mud sinks, and at some point cuts off the flow of oil and gas. The plug is eventually made permanent using cement.

The biggest challenge, perhaps, is to hit such a tiny target accurately at such a great depth. The main well head is a mile underwater, and the location BP is trying to tap into is more than three miles beneath the sea floor. The pipe within the main well is only about seven inches wide. Bill Stone, a retired petroleum engineer based in Houston, assures me that the industry’s targeting equipment is quite advanced. “It’s very precise,” he says. “Right now, this is a statement that sounds silly. But really, the drilling in this type of water is more sophisticated than the space program.”

That’s not to say there won’t be setbacks. A relief well drilled to quell last year’s Montara blowout off the coast of Australia took five tries before it succeeded—with an average of one week between them. Relief wells to stop the massive Ixtoc 1 blowout in June 1979, now the Gulf’s second-worst spill ever, took a full year. And nobody knows how many attempts this one will require.

Some observers, including Markey, are concerned with yet another worst-case scenario: What if there’s a blowout in one of the relief wells? Then you have two gushers to contend with. Bill Stone thinks this is unlikely. Having already drilled there, he says, BP should have a good idea of the problems it might face.

But faith in BP is justifiably low at this point. At least in the corners of the Internet currently obsessed with the spill, some people have raised concerns that the piping and cement casing below the sea floor may be so badly damaged that the well bore could collapse before the relief wells do their job. For his part, Allen has said the Coast Guard is unsure whether the well bore is compromised.

On paper, at least, BP appears no better prepared for a fresh accident than it was for the original. Its relief-well plan, slapped together and submitted six days after the Macondo blowout (the current fiasco), acknowledges risks of another blowout, and also the possibility of puncturing the main oil reservoir by mistake. Adding to those worries, the Department of the Interior this week identified “performance problems” with blowout preventers on the relief wells, problems the rig owners now claim have been resolved.

Incident commander Allen has indicated that BP and the federal response team are lining up contingency plans in case the new wells fail, which include pumping the oil to another platform. But the company’s current response plan for a relief-well blowout smacks of déjà vu: An “accidental oil spill,” it states, “could cause impacts to beaches. However, due to the distance to shore (48 miles) and the response capabilities, no significant impacts are expected.”

Given the potential complications, it’s even possible that this gusher could continue until Christmas. Which makes BP’s optimism a bit perplexing. Perhaps Markey put it best in his statement calling on BP to clarify its expected kill date. “While everyone wants the quickest possible end to this disaster,” he said, “we don’t need rose-colored scenarios, but realistic estimates on when this spill will finally be over.”