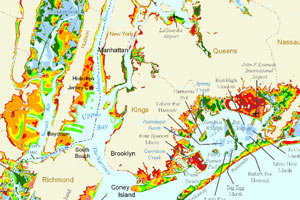 Photo courtesy of the EPA

Also from the Climate Desk: Which part of the Atlantic coast will be swallowed by the sea?

The quickest way to adapt to rising sea levels is to simply build a wall to keep the water out. But turning the shoreline into a fortress will trade one kind of environmental devastation for another, according to Jim Titus, the Environmental Protection Agency’s expert on sea-level rise. Titus predicts that by the end of the century, sea walls, bulkheads, and other kinds of shoreline defenses could lead to the destruction of as much as 90 percent of the Atlantic Coast’s wetlands. Here’s the problem: By preventing coastal areas from eroding, manmade defenses also prevent wetlands from migrating inland, leaving them to slowly drown as the water rises.

For the past three decades, Titus has tried to get state and local governments to address this problem, without much luck. He recently started tackling it from a different angle: Taking on the US Army Corps of Engineers. The 1972 Clean Water Act gave the Corps the power to stop property owners from destroying wetlands. Developers who want to build upon wetlands must create new ones somewhere else—a requirement that costs them $2.9 billion annually. Expanding this rule to include the long-term effects of sea walls could cost developers billions more and provoke a showdown between the government and homeowners desperate to hold back the waves.

It’s a fight the Corps would rather not have. Though the agency accounts for sea-level rise when it builds public dikes and levees, it doesn’t think sea-level forecasts are accurate enough to be used to regulate private property owners, says David Olson, the Corps’ regulatory program manager.

Titus, who holds a Georgetown law degree, argues that someone might have to sue the Corps to get it to act. That could lead to an elaborate federal permitting process for shoreline defenses—hardly an elegant solution. The alternative, Titus says, would be for the federal government to set overall targets for wetland protection and let states and local authorities figure out how to get there. They might, for instance, allow seawalls in highly developed areas while banning them in areas where wetlands and beaches can be revitalized as natural defenses. But this approach could set up some ugly political fights over property rights that most lawmakers would prefer to avoid.

Which brings Titus back to convincing the Army Corps of Engineers that it’s worth planning for climate change. “When we talk about emission reduction, we believe the Earth is warming,” he says, referring to the EPA’s recent decision to consider regulating carbon emissions. “But when it comes to the consequences, we act as if was just a theory.”