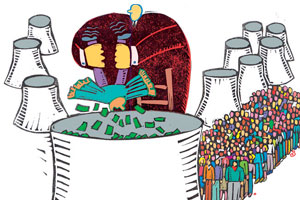 Unistar Nuclear Energy, which in 2007 became the first company in nearly 30 years to apply to build a new reactor in the US, bills itself as “the business model for a new generation of nuclear energy facilities.” If that’s so, taxpayers should be mighty concerned.

In addition to its proposed flagship plant in the tiny Chesapeake Bay town of Lusby, Maryland, UniStar plans to build three more reactors in Missouri, New York, and Pennsylvania. But while UniStar estimates that these projects will cost up to $38 billion, the company, a joint venture between a French nuclear firm and US-based Constellation Energy, had only about $575 million in assets and capital as of early 2009. Its plans to jump-start a nuclear revival hinge on getting the government to underwrite the enterprise, via federally backed loans. As UniStar’s president and CEO George Vanderheyden warned in 2007, “Without the federal loan guarantees, this whole thing will come to a stop.”

Most of the industry is banking on a similar strategy—and in the climate legislation staggering through Congress, it just may have found the vehicle. Key Senate Democrats have signaled that they are willing to use nuclear subsidies as a bargaining chip to overcome Republican opposition. The Nuclear Energy Institute (NEI), the industry’s main lobby, is pushing for at least $100 billion in federal loan guarantees—a dicey proposition given that the Congressional Budget Office has determined that the risk of default would be “well above 50 percent.” This raises the question: Will the cost of passing a climate bill be a massive, taxpayer-funded nuclear bailout?

The public has rescued the industry once before. The last batch of reactors built in the US during the 1970s and ’80s was plagued by a series of boondoggles, one of the most infamous being Long Island’s Shoreham Nuclear Power Plant, which took 20 years to build and cost $6 billion—more than 80 times the original estimate—but was never put into commercial operation. Similar debacles pushed utilities into bankruptcy, triggered the largest municipal bond default in US history, and helped cause a sixfold increase in wholesale electricity prices. The total cost to the public, in rate hikes and taxpayer bailouts, was more than $300 billion (in 2006 dollars), according to the Union of Concerned Scientists.

Since that time, the industry says it has solved its cost problem, partly by engineering reactors that are simpler and less expensive to build. But the first two next-generation reactors, which are under construction in Finland and France, have been bogged down in multibillion-dollar cost overruns. Meanwhile, the projected cost of building new nuclear plants in the US is soaring: As recently as 2005, the NEI claimed new reactors could be constructed for roughly $2 billion. Newer estimates, including one by Moody’s, the credit ratings agency, put the cost as high as $12 billion. That would make nuclear power more expensive on a watt-for-watt basis than most large-scale renewable energy sources, including wind, biomass, and hydropower.

No wonder the industry has found it impossible to secure private-sector financing for the 28 reactors that are currently in the pipeline across the nation. Investors “will not accept the economic risk of building new reactors,” says Peter Bradford, a former member of the Nuclear Regulatory Commission who is now a professor at Vermont Law School. “There will be no nuclear renaissance beyond what the government is willing to underwrite.”

No one understands this better than the industry itself, which is lobbying for a Senate bill to create a Clean Energy Deployment Administration (CEDA) within the Department of Energy (DOE) that would have the authority to award a virtually unlimited number of loan guarantees—without congressional review. “It’s a nuclear slush fund,” says Michele Boyd, director of Physicians for Social Responsibility‘s safe energy program, “though the way the bill is written, even many Senate staffers don’t know it.” The legislation, which is likely to be folded into the climate bill, was sponsored by Sen. Jeff Bingaman (D-N.M.) and crafted with the help of Sen. Lisa Murkowski (R-Alaska). Both lawmakers are top recipients of the nuclear industry’s campaign largesse. Under the policy, companies would have to pay an as yet unspecified subsidy fee in order to get loan guarantees, but these payments are all but certain to be dwarfed by the cost of defaults. According to the Union of Concerned Scientists, if 100 new plants are built, as key Republican lawmakers have called for, the price of bad loans could total at least $360 billion—and that’s assuming zero cost overruns.

The ceda provision builds on the work of Sen. Pete Domenici (R-N.M.), who until his retirement in January 2009 was the Senate’s most tireless nuclear crusader. During his reign as chairman of the energy committee from 2003 to 2007, he packed the committee staff with former nuclear-power lobbyists—a clique dubbed “the glow-in-the-dark crew” by some of their Senate colleagues—who shepherded through Congress the Energy Policy Act of 2005. Among other things, the bill provided $13 billion in nuclear subsidies and federal loan guarantees to cover 80 percent of the costs of building low-carbon nuclear technologies, including new reactors.

For any other industry, this would have been an enormous victory. But for nuclear, even these generous subsidies weren’t enough. In July 2007, six of the nation’s largest financial firms—including Citigroup, Lehman Brothers, and Goldman Sachs, companies hardly averse to risky investments—informed the DOE in a letter that nuclear projects would not find financing because they were too chancy. Unless, of course, the agency (which had interpreted the new law to mean 80 percent of project debt) would rewrite the rules so that 100 percent of the debt was covered—foisting almost all of the risk on taxpayers.

By the end of 2007, the nuclear lobby had succeeded in getting the DOE to make exactly these changes. But to the industry’s dismay, Congress has so far given the DOE authority to distribute $18.5 billion in loan guarantees for nuclear power facilities. That’s less than half what UniStar hopes to spend on its four plants, not to mention the needs of the industry at large. So the industry began pushing to increase the funding and simultaneously exempt the program from congressional oversight.

Part of NEI’s strategy for getting the feds to hand out loan guarantees more freely has been to win over Democrats—who have traditionally been less friendly to nuclear power—by enlisting the help of organized labor. In mid-2008, the group added Michael Mathis and Charles Harple, previously top in-house lobbyists for the International Brotherhood of Teamsters, to its K Street bench. NEI also forged an alliance with the AFL-CIO. At NEI’s annual conference in 2008, Mark Ayers, the AFL-CIO’s president of Building and Construction Trades, said that in exchange for the industry’s commitment to use union labor, his organization would work to “persuade the new majority in Congress about the need for extending and increasing the loan guarantee program.”

The industry’s efforts began to pay off this fall, as nuclear subsidies emerged as the key to wooing Republican votes for a Senate climate bill—votes necessary to offset defections from coal-state Democrats. Since October, Sen. John Kerry (D-Mass.), one of the climate bill’s sponsors, has been holding closed-door meetings with Republicans to craft nuclear language. “You listen to the rhetoric around this place and there is no one who will say a disparaging word about nuclear,” says a senior Democractic Senate staffer close to the climate bill talks. “They have enough political muscle and enough support across the aisle that I think they will get all the loan guarantees they need.”