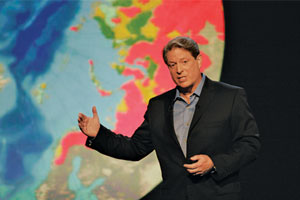 1800: At the dawn of the industrial revolution, planet’s CO2 concentration is around 280 ppm—38% lower than today. 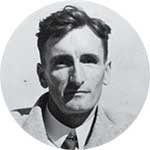 May 30, 2004: Climate change dystopia The Day After Tomorrow released; will bring in more than $544 million.

1975: National Academy of Sciences report warns of “serious worldwide cooling” in the next 100 years, sparking fears of new ice age.

December 15, 2007: Papua New Guinea’s delegate tells US reps at Bali climate negotiations to step up or “get out of the way.”

1985: Scientists at Villach conference in Austria reach consensus that global warming is happening and international treaties needed to curb emissions.

February 1, 2008: ExxonMobil reports $40.6 billion profit—the largest for any US company ever.

February 2008: An iceberg bigger than Manhattan breaks off the Wilkins Ice Shelf in Antarctica.

1992: At Rio Earth Summit, US blocks calls for serious action; President George H.W. Bush declares, “The American way of life is not negotiable.”

July 28, 2003: US Sen. James Inhofe (R-Okla.) says on Senate floor that global warming is “the greatest hoax ever perpetrated on the American people.”

April 2008: Hansen warns that a CO2 concentration over 350 ppm isn’t compatible with “a planet similar to that on which civilization developed and to which life on Earth is adapted.”

February 1, 2009: NOAA finds that effects of climate change will be “largely irreversible” for more than 1,000 years after emissions stop.

December 7-18, 2009: Nations to meet in Copenhagen to negotiate successor treaty to Kyoto Protocol.