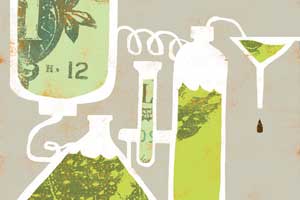 When Adam Freeman graduated last December from Kennesaw State University in Georgia with a degree in biochemistry, he wanted to work in only one field: pond scum. Freeman had read that entrepreneurs were squeezing out fuel from the green muck known as algae, and he wanted to be one of them. So he set out on an algae road trip. With a list of more than 40 companies to visit, he drove from his hometown of Roswell, Georgia, to Vancouver, British Columbia, and back—sleeping on couches and knocking on companies’ doors. But after four months and 18,000 miles, he realized that the industry wasn’t what it purported to be. No one actually seemed to be producing oil. Most companies were simply growing scum without analyzing it. Some were bizarrely secretive. “I thought there’d be established companies where I could get a job, but there weren’t,” he says.

Freeman saw firsthand the algae industry’s slimy secret: Some companies have promised impossible amounts of oil based on speculation, raising millions from unwitting investors. “We can overtake petroleum by 2030!” one algae executive proclaimed at a meeting in June. Biofuel experts say that with the technology expected in the next three to five years, an acre of algae can theoretically yield as much as 5,000 gallons of oil annually—enough to fuel about 10 cars for a year. Sounds impressive, especially compared with other biofuels; the current yield for corn ethanol is about 400 gallons per acre. Yet ethanol sells for about $2 a gallon, while making algal oil is still so prohibitively expensive that the algae companies have produced only a few dozen gallons of it.

Not one algae company has a commercial-scale system. In fact, most haven’t moved out of the lab. Their big claims, explains Stephen Mayfield, a biologist at the Scripps Research Institute, are extrapolated from their best lab results. But the numbers aren’t so easy to fudge in other biofuel industries. Startups working on cellulosic ethanol made from switchgrass, for instance, must prove they can outperform the corn ethanol industry.

A concerted effort to study algal fuels started in 1978 at the National Renewable Energy Lab in Golden, Colorado. The $25 million program, which laid the groundwork for much of the current research, shut down in 1996, in part because algal oil couldn’t compete with the low cost of crude. But entrepreneurs pounced when fuel prices jumped in 2006. Today there are an estimated 200 algae companies worldwide.

Pond scum attracts dilettantes in part because the process of turning it into fuel seems so straightforward. When algae are deprived of nutrients, they stop growing and put their energy into storage, often in the form of natural oils called lipids. These oils can be refined into just about any kind of fuel, such as biodiesel or crudelike oil that can be made into gasoline. Algae have the potential to produce 10 times more oil per acre than common biofuel crops such as palms and soybeans. Production can be done in open ponds or enclosed, transparent bioreactors; on swampy land and in salt water; and without competing with food crops. Algae can even suck carbon dioxide from industrial emissions pumped directly into their ponds, while plants have to absorb it from the air.

But with simple technology come simple limits. Promises from companies that say they can surpass 10,000 gallons an acre are “total baloney,” says Ron Pate, a scientist at Sandia National Laboratories. Only a handful of algae companies have realistic business plans or proprietary technology, says Jürgen Polle, an algae specialist at Brooklyn College. The bulk of startups “don’t have a clue about algae” but are hyping their technologies anyway, he says. Polle estimates that about 10 percent are knowingly making promises they can’t keep.

Pitching an algae company on inflated numbers is surprisingly easy. Here’s how it’s done: Present your scaled-up yields at meetings filled with VC investors hungry for the next renewable fuel. For flair, paste Photoshopped images of giant ponds of algae onto your presentations and your website. Then, when people ask to see your facility, tell them it’s top secret. Pate at Sandia Laboratories says he keeps “getting the runaround” from companies when he tries to validate their claims. Freeman says OriginOil execs told him that their Los Angeles facility was off-limits to visitors.

Concerns about the hype haven’t discouraged major investors. In July, petroleum giant ExxonMobil, once famous for scoffing at biofuels like ethanol, announced it would invest $600 million in algae technology. The industry is also about to get a federal windfall: The Department of Energy plans to devote $50 million of its stimulus funding to an “algal biofuels consortium” aimed at bringing together public sector labs like Sandia with private companies. As much as another $200 million, subject to congressional appropriations, will be divided among 5 to 12 groups with proposals for biorefinery projects. Algae companies are eligible to apply. Gene Petersen, a top DOE biomass researcher, is aware of the industry’s murky claims, but his fellow researcher Valerie Sarisky-Reed sees potential “so great it can’t be ignored.”

Some of the most outrageous claims have come from Valcent Products, whose executives have said they can produce 100,000 gallons of oil per acre per year. Meanwhile, SunEco Energy in Chino, California, claims it will be able to produce more than 33,000 gallons per acre per year based on a pilot operation with the volume of a large backyard swimming pool. It also claims that it will make fuel for close to $20 a barrel. But Pate estimates the actual cost of algae fuel at $420 to $840 a barrel. Even if that figure decreased by half in five years, as some predict, it would still cost five times as much as crude did at its peak in 2008.

Some overconfident companies have already crashed. When the Cambridge, Massachusetts-based GreenFuel Technologies was founded in 2001, its claims were so overblown that they “became a joke,” says Mayfield. The company insisted it could produce oil at the equivalent of more than 44,000 gallons per acre per year. Venture capitalists ponied up more than $33 million between 2005 and 2008, a sizable amount for an energy startup of its size.

GreenFuel’s pilot project proved twice as expensive as projected, and the company folded in May. “They had no technology—nothing except PR for outrageous claims repeated often enough to sound believable to some poor souls who bought into their fibs,” says John Benemann, a former researcher at the University of California-Berkeley who now works as an algae consultant. Mark Quinn, a British entrepreneur who wanted to test his algae species in GreenFuel’s bioreactor, paid the company $300,000 in licensing fees.

Whether the algae charlatans will be exposed before the DOE sinks taxpayers’ money into their companies is another question. Curtis Rich, a renewable energy attorney, says he believes the DOE’s review teams will be “able to determine those projects based on press releases and those based on sound research.” But Benemann is not so sure. The week GreenFuel folded, the DOE awarded an Arizona utility $70.6 million to scale up the firm’s technology.

As for Freeman, he has concluded that instead of joining up with an existing algae company, he’s better off starting his own. The way he sees it, there isn’t a lot of real competition out there.