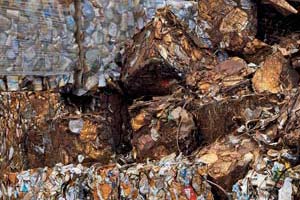 ONCE A YEAR OR SO, it’s my turn to run recycling day for our tiny town. Saturday morning, 9 to 12, a steady stream of people show up to sort out their plastics (No. 1, No. 2, etc.), their corrugated cardboard (flattened, please), their glass (and their returnable glass, which goes to benefit the elementary school), their Styrofoam peanuts, their paper, their cans. It’s quite satisfying—everything in its place.

But it’s also kind of disturbing, this waste stream. For one, a town of 550 sure generates a lot—a trailer load every couple of weeks. Sometimes you have to put a kid into the bin and tell her to jump up and down so the lid can close.

More than that, though, so much of it seems utterly unnecessary. Not just waste, but wasteful. Plastic water bottles, one after another—80 million of them get tossed every day. The ones I’m stomping down are being “recycled,” but so what? In a country where almost everyone has access to clean drinking water, they define waste to begin with. I mean, you don’t have a mug? In fact, once you start thinking about it, the category of “waste” begins to expand, until it includes an alarming percentage of our economy. Let’s do some intellectual sorting:

There’s old-fashioned waste, the dangerous, sooty kind. You’re making something useful, but you’re not using the latest technology, and so you’re spewing: particulates into the air, or maybe sewage into the water. You wish to keep doing it, because it’s cheap, and you block any regulation that might interfere with your right to spew. This is the kind of waste that’s easy to attack; it’s obvious and obnoxious and a lot of it falls under the Clean Air Act and Clean Water Act and so on. There’s actually less of this kind of waste than there used to be—that’s why we can swim in most of our rivers again.

There’s waste that comes from everything operating as it should, only too much so. If carbon monoxide (carbon with one oxygen atom) exemplifies pollution of the first type, then carbon dioxide (carbon with two oxygen atoms) typifies the second. Carbon monoxide poisons you in your garage and turns Beijing’s air brown, but if you put a catalytic converter on your tailpipe it all but disappears. Carbon dioxide doesn’t do anything to you directly—a clean-burning engine used to be defined as one that released only CO2 and water vapor—but in sufficient quantity it melts the ice caps, converts grassland into desert, and turns every coastal city into New Orleans.

There’s waste that comes from doing something that manifestly doesn’t need doing. A hundred million trees are cut every year just to satisfy the junk-mail industry. You can argue about cutting trees for newspapers, or magazines, or Bibles, or symphony scores—but the cascade of stuffporn that arrives daily in our mailboxes? It wastes forests, and also our time. Which, actually, is precious—we each get about 30,000 days, and it makes one a little sick to calculate how many of them have been spent opening credit card offers.

Or think about what we’ve done with cars. From 1975 to 1985, fuel efficiency for the average new car improved from 14 to 28 miles per gallon. Then we stopped worrying about oil and put all that engineering talent to work on torque. In the mid-1980s, the typical car accelerated from 0 to 60 mph in 14.5 seconds. Today’s average (even though vehicles are much heavier) is 9.5 seconds. But it’s barely legal to accelerate like that, and it makes you look like an idiot, or a teenager.

Then there’s the waste that comes with doing something maybe perhaps vaguely useful when you could be doing something actually useful instead. For instance: Congress is being lobbied really, really hard to fork over billions of dollars to the nuclear industry, on the premise that it will fight global warming. There is, of course, that little matter of nuclear waste—but lay that aside (in Nevada or someplace). The greater problem is the wasted opportunity: That money could go to improving efficiency, which can produce the same carbon reductions for about a fifth of the price.

Our wasteful habits wouldn’t matter much if there were just a few of us—a Neanderthal hunting band could have discarded six plastic water bottles apiece every day with no real effect except someday puzzling anthropologists. But the volumes we manage are something else. Chris Jordan is the photographer laureate of waste—his most recent project, “Running the Numbers,” uses exquisite images to show the 106,000 aluminum cans Americans toss every 30 seconds, or the 1 million plastic cups distributed on US airline flights every 6 hours, or the 2 million plastic beverage bottles we run through every 5 minutes, or the 426,000 cell phones we discard every day, or the 1.14 million brown paper supermarket bags we use each hour, or the 60,000 plastic bags we use every 5 seconds, or the 15 million sheets of office paper we use every 5 minutes, or the 170,000 Energizer batteries produced every 15 minutes. The simple amount of stuff it takes—energy especially—to manage this kind of throughput makes it daunting to even think about our waste problem. (Meanwhile, the next time someone tells you that population is at the root of our troubles, remind them that the average American uses more energy between the stroke of midnight on New Year’s Eve and dinner on January 2 than the average, say, Tanzanian consumes in a year. Population matters, but it really matters when you multiply it by proximity to Costco.)

Would you like me to go on? Americans discard enough aluminum to rebuild our entire commercial air fleet every three months—and aluminum represents less than 1 percent of our solid waste stream. We toss 14 percent of the food we buy at the store. More than 46,000 pieces of plastic debris float on each square mile of ocean. And—oh, forget it.

These kinds of numbers get in the way of figuring out how much we really waste. In recent years, for instance, 40 percent of Harvard graduates have gone into finance, consulting, and business. They had just spent four years with the world’s greatest library, some of its finest museum collections, an unparalleled assemblage of Nobel-quality scholars, and all they wanted to do was go to lower Manhattan and stare into computer screens. What a waste! And when they got to Wall Street, of course, they figured out extravagant ways to waste the life savings of millions of Americans, which in turn required the waste of taxpayer dollars to bail them out, money that could have been spent on completely useful things: trains to get us where we want to go—say, new national parks.

Perhaps the only kind of waste we’ve gotten good at cutting is the kind we least needed to eliminate: An entire industry of consultants survives on telling companies how to get rid of inefficiencies—which generally means people. And an entire class of politicians survives by railing about government waste, which also ends up meaning programs for people: Health care for poor children, what a boondoggle.

Want to talk about government waste? We’re going to end up spending north of a trillion dollars on the war in Iraq, which will go down as one of the larger wastes of money—and lives—in our history. But we spend more than half a trillion a year on the military anyway, more than the next 10 nations combined. That almost defines profligacy.

We’ve gotten away with all of this for a long time because we had margin, all kinds of margin. Money, for sure—we were the richest nation on Earth, and when we wanted more we just borrowed it from China. But margin in other ways as well: We landed on a continent with topsoil more than a foot thick across its vast interior, so the fact that we immediately started to waste it with inefficient plowing hardly mattered. We inherited an atmosphere that could buffer our emissions for the first 150 years of the Industrial Revolution. We somehow got away with wasting the talents of black people and women and gay folks.

But our margin is gone. We’re out of cash, we’re out of atmosphere, we’re out of luck. The current economic carnage is what happens when you waste—when the CEO of Merrill Lynch thinks he needs a $35,000 commode, when the CEO of Tyco thinks it would be fun to spend a million dollars on his wife’s birthday party, complete with an ice sculpture of Michelangelo’s David peeing vodka. The melted Arctic ice cap is what you get when everyone in America thinks he requires the kind of vehicle that might make sense for a forest ranger.

Getting out of the fix we’re in—if it’s still possible—requires in part that we relearn some very old lessons. We were once famously thrifty: Yankee frugality, straightening bent nails, saving string. We used to have a holiday, Thrift Week, which began on Ben Franklin’s birthday: “Beware of little expenses; a small leak will sink a great ship,” said he. We disapproved of frippery, couldn’t imagine wasting money on ourselves, made do or did without. It took a mighty effort to make us what we are today—in fact, it took a mighty industry, advertising, which soaks up plenty more of those Harvard grads and represents an almost total waste.

In the end, we built an economy that depended on waste, and boundless waste is what it has produced. And the really sad part is, it felt that way, too. Making enough money to build houses with rooms we never used, and cars with engines we had no need of, meant wasting endless hours at work. Which meant that we had, on average, one-third fewer friends than our parents’ generation. What waste that! “Getting and spending, we lay waste our powers,” wrote Wordsworth. We can’t say we weren’t warned.

The economic mess now transfixing us will mean some kind of change. We can try to hang on to the status quo—living a Wal-Mart life so we can buy cheaply enough to keep the stream of stuff coming. Or we can say uncle. There are all kinds of experiments in postwaste living springing up: Freecycling, and Craigslisting, and dumpster diving, and car sharing (those unoccupied seats in your vehicle—what a waste!), and open sourcing. We’re sharing buses, and going to the library in greater numbers. Economists keep hoping we’ll figure out a way to revert—that we’ll waste a little more, and pull us out of the economic doldrums. But the psychological tide suddenly runs the other way.

We may have waited too long—we may have wasted our last good chance. It’s possible the planet will keep warming and the economy keep sinking no matter what. But perhaps not—and we seem ready to shoot for something nobler than the hyperconsumerism that’s wasted so much of the last few decades. Barack Obama said he would “call out” the nation’s mayors if they wasted their stimulus money. That’s the mood we’re in, and it’s about time.