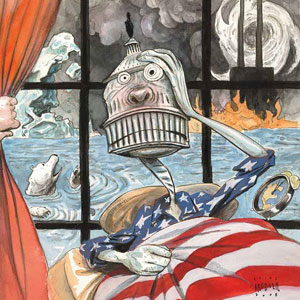 
By december 2007, Rep. Edward Markey (D-Mass.) had been toiling on environmental and clean-energy legislation in Congress for three decades—and for the past few years, the task had increasingly come to feel like pushing a boulder up Capitol Hill. But that was then. Now Markey, a garrulous lawmaker with a thick Boston accent, was elated. As chairman of a new committee on energy independence and global warming set up by House Speaker Nancy Pelosi, he had helped pass a groundbreaking energy bill that would cut greenhouse emissions and boost fuel standards for the first time since 1975. The new standard—35 mpg by 2020—would eventually eliminate 190 million metric tons of global warming gases, the equivalent of getting rid of 28 million cars and trucks. The bill also required utilities to generate 15 percent of their electricity from renewables by 2020, increased building efficiency standards by 50 percent, and shifted tax breaks from Big Oil to renewables. With all this, Markey notes, the United States would have met 35 percent of the Kyoto Protocol’s greenhouse targets by 2030—not bad, considering that Markey’s global warming committee was less than a year old.

Then came the Senate. With President Bush threatening a veto, the Republicans filibustered, and the Democrats fell 7 votes shy of the 60 needed to bring the bill to a vote. Having stalled the measure, gop senators killed the renewable electricity standard, the tax breaks for alternative energy, and the building efficiency rules; only the automotive standards remained and became law. And as much as Markey was heartened by that change, he remains frustrated about the missed opportunity. “We were on the cusp of a huge victory,” he says. “There was a real tragedy in that.”

What went wrong? At a time when the phony debate over the science of global warming finally seemed done—and when many scientists were asserting that dramatic action was needed, now—why couldn’t Washington do better?

To be sure, the political argument over climate change has shifted. These days, Republicans are no longer in lockstep denial about the reality of human-created climate change; instead, they dwell on the emissions of China and India and insist that reducing America’s carbon footprint will wreak economic havoc. Still, global warming poses a fundamental ideological challenge to the gop, for it undermines the view that an unregulated market inevitably produces the best possible outcome. The belief that the government should not meddle with energy policy, Markey notes, “is deeply built into the dna of the Republican Party.” (Some Democrats have been part of the problem too. Speaker Pelosi felt compelled to create Markey’s climate committee in part because Rep. John Dingell, D-Mich., who chairs the House energy and commerce committee, is practically welded to General Motors.)

But Washington’s inertia goes beyond the usual problem of pols doing the work of industry pals. There are systemic factors keeping government from coming up with a far-reaching solution to a far-reaching problem. Long story short: Washington doesn’t do bold well.

“With global warming, the biggest calamities come far too late,” Karpinski says. “Washington has to change how it does business.” And that means, foremost, change at the top: “You need the bully pulpit of the White House if you want to make fundamental changes in the economy that will affect just about every major industry.”

Thomas Mann, a congressional scholar at the Brookings Institution, points out that it is “especially difficult to impose short-term costs for long-term gain. A large gas tax—with revenues used to subsidize low-income households and invest in a new green economy—could do wonders, but it is politically impossible at this time. The best we can expect for now [are] incremental steps redirecting tax subsidies from carbon-based fuels to renewable energy and major public investment in alternative-fuel research and development.” And even that is going to be difficult in an atmosphere of hyperpartisanship, where difficult proposals are more likely to be treated as political ammunition than policy alternatives. “One party has to have a large margin of control,” Karpinski says, “to cut through the political positioning.”

And cut through the Senate. Because a 60-vote supermajority is required to end a filibuster, notes Dan Becker, director of the Safe Climate Campaign, “the question is always who will be the 60th vote, and that vote will determine how strong or weak a bill is.”

Just getting the fuel-economy standards through the Senate was a monumental task, Becker recalls. “It took pressure from states [passing their own clean-car laws], it took high gas prices, it took a film by Al Gore, it took a perfect storm—all to win against one powerful industry. And we weren’t fighting the utilities or the oil and gas industries.”

The enviros also caught a lucky break when Nissan split with other auto companies to support the measure, which contained a provision helping carmakers that produce vehicles both in the US and overseas. Not coincidentally, Republican senators Trent Lott and Thad Cochran from Mississippi, where Nissan has a large factory, came out in support of the bill. And there was another inside play: Sen. Daniel Inouye (D-Hawaii), the chairman of the commerce committee, leaned on his close pal, the influential Sen. Ted Stevens (R-Alaska), to come on board. It didn’t hurt that a former Stevens staffer was now lobbying for the bill on behalf of Nissan. “This is not the stuff you learn about in high school,” Becker quips.

If Washington does not easily produce sweeping change, its denizens are certainly good at proclaiming sweeping change. Congress will address a big issue—take the McCain-Feingold campaign-finance legislation—and essentially say, “Don’t bother us about this again.” Unfortunately, Becker points out, global warming “is the kind of issue that we’ll have to come back and back and back to over the next 50 to 100 years.”

Yet is inaction (or underaction) in Washington only Washington’s fault? “The fundamental problem,” says David Hamilton, director of the Sierra Club’s global warming program, “is that 85 percent of the public believes global warming is a problem, but only 35 percent believes it is an urgent problem. You can look at polar bears and melting ice caps and listen to Al Gore. But until you internalize the fact that it’s a real emergency, the usual concerns dominate. Washington is no different. It has not internalized global warming. It has dealt with it in a traditional way.”

Working the traditional avenues the best he can, Markey in June introduced a climate change bill that would cap emissions at 85 percent of 2005 levels by 2050. It was immediately referred to 10 different committees—including Dingell’s. That means 10 separate debates in the House alone.

“I’m an optimist,” Markey says. “The science is clear. The technology is available. This is not putting a man on the moon. It’s more like air-conditioning mechanics. If you can get the policy right, you can get the entire paradigm right.” That is, if you can get Washington right—which might be the toughest job of all.