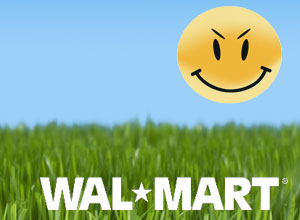 
Every weekday morning, between 7 and 8 a.m., Tom Custard fishes through the trash at the gas station at the Sam’s Club in Hermantown, Minnesota. Armed with two shopping carts, the 61-year-old goes through the six garbage cans by the pumps, sometimes in 40-below windchills, carefully separating out bottles and cans tossed by customers who can’t be bothered to walk to the recycling bin.

But if you figured the man in the gloves and fedora for a scavenger, you’d be wrong. Custard is a gas station attendant for the big-box store, which is owned by Wal-Mart; picking through the trash is a task he thought up himself. “I think it’s the right thing to do, and I feel that I’m doing something for the environment before I retire,” says Custard, who is due to hang up his yellow reflective vest at the end of the year.

Custard is one of hundreds of thousands of employees partaking in an initiative Wal-Mart calls the Personal Sustainability Project, a.k.a. psp. Since 2007, all Wal-Mart employees in the US have been asked to take a simple, concrete step to benefit their health, their local community, or the earth. psp pledges, which can involve work or home life or both, have included vows to drive the speed limit (to save gas), clean up trash, quit smoking, switch to a reusable bottle, or turn off the tap when toothbrushing. Since last year, Wal-Mart claims, 45 percent of its workers in the United States have taken on a Personal Sustainability Project; workers receive no financial incentive, and many of the projects take place after hours, off the clock.

The project is the brainchild of former Sierra Club president Adam Werbach, who is now ceo of the Saatchi & Saatchi marketing agency’s green branch. (Werbach declined to comment for this story.) It’s part of a sweeping sustainability effort Wal-Mart launched in 2005—a campaign that has seen the company do everything from pledging to double the efficiency of its truck fleet to pushing General Mills to shrink Hamburger Helper boxes by replacing crinkly noodles with straight.

So, is the psp one of the quickest ways to get large numbers of people to go green—or just another way for Wal-Mart to extend its tyranny over workers’ personal lives? The answer just might be both. Wal-Mart’s enormous impact—via its 1.9 million associates, 200 million customers, and the staggering 10 percent of all retail spending that takes place in its stores—is well documented; the company literally transformed the business landscape with its ruthless focus on price, notes Charles Fishman, author of The Wal-Mart Effect. “If Wal-Mart is serious about sustainability, it can have an incredible impact on how the economy operates,” he says.

The psp also suggests that Sam Walton’s successors envision the workplace as more than where you toil to get a (however meager) paycheck and (ditto) health insurance—as, instead, a catalyst for personal growth and social change, where “psp captains,” cheerleading coworkers, spur you on toward your goals. The program, says Fishman, is an example of corporate America filling a role akin to churches and community organizations—and that’s not a bad thing in his view: “As long as it doesn’t drift in the direction of being some kind of compulsion, it’s wonderful.”

Then again, compulsion is a real concern. This is, after all, the same company that held mandatory meetings for managers and department heads this summer, warning that Democratic victories would hurt its business by bolstering unions.

Besides, critics argue, if Wal-Mart cares about making employees’ lives more sustainable, why not start with their paychecks—or its infamous labor practices, which have resulted in lawsuits over sex discrimination, anti-union tactics, mandatory overtime, and more? On sites like Wal-Mart Blows, employees can be found announcing that their psp is to get a new job—somewhere else. The primary gripe on the message boards: Why should Wal-Mart be telling me how to live my life?

But that criticism doesn’t register with Hope Aubuchon, a 33-year-old who is a department manager at the Wal-Mart Supercenter in Colorado Springs. She says she’s grateful for the psp suggestions offered at daily store meetings; she and her son Zeno, 10, and daughter Lacey, 14, have adopted more than a dozen Personal Sustainability Projects, from packing school lunches in reusable (and Wal-Mart-branded) bags to religiously turning off the lights when they leave the room. “I have saved so much money just doing the little tips that it makes making it through each month easier,” says Aubuchon, a single mother who has worked for Wal-Mart for nine years. “Buying school supplies this year wasn’t as hard.”

For Wal-Mart itself, the psps also mean big savings. Darryl Meyers, who works in the Burlington, North Carolina, store, thought that the 24-7 lights inside the vending machines in the break rooms were wasteful. He suggested turning them off, and the company has saved nearly $1 million because of it. “When associates get engaged personally, they do start getting more engaged with sustainability at work,” says Janelle Kearsley, a Wal-Mart executive at company headquarters in Bentonville, Arkansas, who was until recently the director of sustainability and strategy running the program. Kearsley’s psps? Exercising more and eating local, which has inspired her to grow tomatoes and green beans in her backyard.

Wait. A Wal-Mart exec who grows her own produce? Isn’t that a form of retail heresy? It’s one of the ironic twists of the psp program that it invites employees to reduce use of some of the very products the company hawks, from cigarettes to gasoline—though of course, as Kearsley notes, Wal-Mart also sells bicycles, organics, and reusable shopping bags.

Back in Hermantown, Tom Custard’s main worry when he started his psp was what the customers would think when they saw him rooting around in the trash by the pumps. Most of them, it turns out, loved the idea. Some of the regulars, who live in rural areas that don’t have recycling, save up their bottles and cans all week to add to his shopping cart.