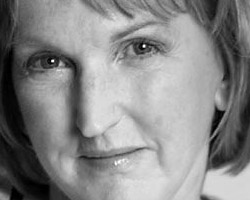 This is a Mother Jones podcast. Ingrid Newkirk is the president and co-founder of People for the Ethical Treatment of Animals [PETA], the world’s largest animal rights organization. The English-born Newkirk has shepherded PETA for two decades, penning multiple books and promoting the organization with controversial publicity campaigns featuring naked models. Mother Jones editor Jen Phillips talks with Newkirk about her newest book, and about the feminists who have a beef with PETA’s ads.

Mother Jones: Thank you so much for taking time out to speak with Mother Jones.

MJ: So we’re going to be talking about your book, One Can Make a Difference, and you have dozens of essays from people from all different walks of life. How did you go about gathering these?

IN: Well, it was a wealth of choices, may I say that. I started out about a year ago thinking that I would put together a book that contained stories—because I hear so many—of people who have set out to help animals in one way or the other. So I started compiling those essays and I began running into so many inspiring people that I began to expand upon it and so now it’s people who have helped in absolutely any way. They might have cleaned up, in one case, the path going up to Everest which is littered with trash and all sorts of hazardous waste. Or somebody who invented a medical device, but they’re all kind people who have really made something of their lives. At PETA we’ve always made the point that the most important thing you can do in life is to be kind. And so all these people are kind in one way or the other.

IN: I start the book with, I have a little saying: whatever you can do or dream you can, begin it because boldness has genius power and magic in it. I do believe, as I travel around talking to people about PETA, about our work to stop cruelty to animals, people raise their hands and they commonly say, But what can I do to stop that? And of course everybody can do something to stop that. You can stop eating animals and you can stop wearing fur. But the same is true, wherever I go, people might have other interests too. They might think that there should be an after-school reading program for children. Or they might think that the Special Olympics needs help. You can get involved and you can do something. I believe you have a finite time on earth and who knows how long you’re going to live? I think movies like The Bucket List are extremely annoying because it says if you find out that you only have, say, six months to live, you should go out and do frivolous things whereas I think you should look at your life as possibilities that you could leave your mark in wonderful ways. Don’t think you can’t. You have enormous power, whoever you are.

MJ: The values that you’re talking about in this book, just being kind and thinking consciously, and making the world a better place, sound to me like very Christian values. I was wondering if PETA has ever gone after the Christian demographic or done a partnership with any local churches?

IN: Yes, and of course and especially with battered women’s shelters and with family homes for distressed people. We also work with a Christian mission, cooking vegetarian hot dogs for people because the last thing I think a homeless person wants is heart disease, atherosclerosis, cancer, and the meat-related diseases. We work, of course, with all sorts of religious organizations who do overseas aid. For example, people give us their fur coats because they’ve had a change of heart, and we then have used them for everything from wildlife bedding to giving them to religious charities who work overseas who go into regions in remote areas of the globe and we cut the fur coats up and make them into coats for children who don’t have the option of going to a store and buying something to keep them warm.

MJ: I’ve just got the strangest image in my head of someone in the Himalayas schleping around in a Saks Fifth Avenue mink coat.

IN: Oh, it’s true, it’s absolutely true, in fact I got some photographs this week. We’ve sent them to Serbia, we’ve sent them to, you name it for the winter. I’ve got a picture of some herders the children wrapped up in obviously some fur coats that were once bought in a ritzy store in Manhattan.

MJ: One question I did have. I really do appreciate the work PETA has done but it has gotten a lot of criticism for using women in some of its ads. A lot of times in bikinis, or scantily clad, I think there was a striptease campaign that came online recently. What do you say to people who criticize PETA and say that it’s not women-friendly, that it denigrates women?

IN: Well, it’s rubbish because the organization is run by a woman, who is me. I marched in the earliest of rallies, I am an adamant feminist, but I’m not a prude and I think you can go to the beach and see people who are in less than you can in a PETA ad. Our people are all volunteers, no one has asked a woman to take off her clothes. I’ve done it myself, we’ve all marched naked if we want to, and I think that it’s very restrictive and in fact wrong. I would expect someone in, say, Iran to tell us that we should cover up, but I don’t expect women or men in this country to criticize women who wish to use their bodies in a form of political statement, to tell them, you need to cover yourself up. There’s this idea of ‘naughty bits’ and I just think it’s funny more than anything else. It’s not sexist, it may be sexual, but no. No woman has ever been paid to strip. She has decided to use her body as a political instrument. That’s her prerogative and I think it is anti-feminist to dare to tell her that she needs to put her clothes back on.

MJ: I guess I just feel that there are so many more women who are vegetarians than male and I don’t know if these campaigns are to raise general awareness or appeal to heterosexual males. What do these campaigns bring for PETA?

IN: It’s a biological fact, isn’t it, that people are drawn to breasts and whathaveyou, it’s just a biological fact. Maybe if everyone walked around naked it wouldn’t be so appealing. But it does, for example, when Alicia Silverstone did a very beautiful, tasteful, ‘naked’ TV spot for us it went everywhere because everyone wanted to take a look. But when people came to the web site, after they saw her commercial, they then were confronted with the facts about why she’s a vegetarian. So when people come to the web site to gawk, they actually get an education. And that’s extremely effective. Because if you just say to people, ‘Hello, would you like to see a slaughterhouse video?’ people are going to say ‘No’ and run in the other direction. But if you say would you like to see Alicia Silverstone without her clothes, most people go, ‘Good Lord, yes. Let’s have a look at that.’

MJ: One thing I saw recently that made me think of you and of PETA is a movie that’s coming out called Beverly Hills Chihuahua. And I was just wondering what your response is to that, whether it’s helping people empathize with animals or it’s kind of exploiting the animal actors in the film.

IN: Well, you know it’s a mixed bag. And we have several campaigns related to this at the moment. I wrote a book, just before this one, called Let’s Have a Dog Party.

MJ: I have that book.

IN: And I wrote it because Paris Hilton, Britney Spears, these people are terrible role models in that they acquire little dogs like the Beverly Hills Chihuahua as arm candy. One of the lessons is please don’t ever get a dog no matter how small or cute if you don’t have the time. It’s like having a baby. You can’t sleep in late, you have to get up and take them out, you can’t stay out all night, they need things. I do think that Beverly Hills Chihuahua is going to cause a run on people getting small dogs and that’s bad because that’s what happened with the 101 Dalmatians movie.

MJ: PETA has so many different campaigns, how do you guys gauge your success? How do you determine whether or not you as an organization have made progress? Do you do it in terms of revenue, or web site visits?

IN: We do do it in a number of ways. For example, our web sites. We have more than a million visitors to PETA.org every month. So we know that’s a success. And then of course we have victories, for example, if you see maniquins in a television car commercial please know that it was PETA who got rid of the car crash tests on baboons and pigs. We stopped NASA from sending monkeys into space. We have persuaded over 600 cosmetic and household products companies not to test on animals. We have, we’re always doing something that makes a tangible difference. But to me, it’s hearts and minds and it’s making activists.

MJ: Ingrid, thank you again for speaking with us.

IN: Again, my pleasure