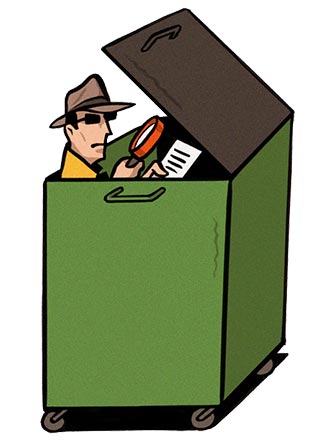 this spring, Mother Jones broke the news that Beckett Brown International, a DC-area private security firm managed by former Secret Service agents, spied on environmental groups and other targets on behalf of corporate clients using a range of dubious tactics, from dumpster diving and finagling phone records to infiltrating offices; among other things, it obtained internal Greenpeace documents including the Social Security numbers of employees. In our investigation, which did not involve any dumpsters, we obtained hundreds of documents showing bbi‘s modus operandi. A few highlights:

Tim,
Received a call from Ketchum yesterday afternoon re three sites in DC. It seems that Taco Bell turned out some product made from bioenginered corn. The chemicles used on the corn have not been approved for human consumption. Hence Taco Bell produced potential glow-in-the-dark tacos…They suspect the initiative is being generated from one of three places:

2. Another September 2000 email from Ward to Bly, about using an off-duty cop to access Center for Food Safety:
Goods news! I think that once Jim calls you back we will know where we stand. If he can’t get it with the shield, it will be difficult…When you talk with the client push the fact that…the anti’s now have found an exposed corporate target and they will be back for more blood.

3. A January 1998 “Client Briefing” for Mary Kay Cosmetics, which apparently retained bbi to gather intel on Gayle Gaston, mother of actress Robin Wright Penn and a Mary Kay executive. The briefing relates a psychological assessment bbi commissioned on Gaston. An excerpt of the “recommendations”:

4. An “After Action Report” in which bbi‘s manager of investigative support, George Ferris, offers tips for future projects:

Find the full story and select documents at motherjones.com/green-groups-black-op.