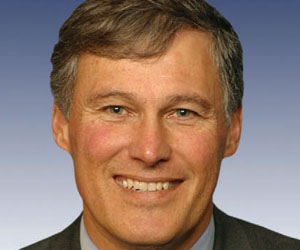 Mother Jones: What’s the idea behind the New Apollo Energy Act, which you proposed in 2005 and would set aside $36 billion for clean-energy R&D?

Jay Inslee: We need to do for clean energy what Kennedy did for space in the original Apollo Project: Set a bold vision that will light the fires of innovation and make a game-changing shift in how we use and produce energy. And nothing less is adequate. It has to be in that scale, it has to be in that boldness, and it has to be in that optimistic spirit. With 1 million square miles of the Arctic melting unexpectedly this summer, these are warning signs that we have to act and act now. Our addiction to Middle Eastern oil obviously has security implications, and we think it’s about time to be generating Eastern Washington wind energy instead of sending our money to the sheikhs. We have had a loss in manufacturing base and a loss of some of our productive capability that can be filled with the green-collar jobs of tomorrow. But it will only happen if we recognize the scale and scope of both the challenge and the opportunity. So we’ve introduced the New Apollo Energy Act, which is, I think, safe to say the most comprehensive and aggressive bill that has been introduced in Congress because it does have the scale, scope, and ambition of the original Apollo Project, and it attacks the problem in every way you can imagine. There’s no silver bullet here, but there are lots of opportunities.

MJ: What can government do that big corporations can’t?

JI: The game is fixed right now. All of the economic signals in the marketplace are essentially subsidizing the use of dirty fossil fuels and penalizing clean energy. There’s really only one entity in society that can solve that problem, and that is government. And the air is a scarce resource. It’s one we hold in common; it has a limited carrying capacity for pollutants and that’s being used up by those who pollute the atmosphere. So we have to stop that externality. We would never allow a utility to put their coal slag in a dump truck and back it up to the city park and dump it in unlimited amounts for free. But that is exactly what we do with carbon dioxide and methane: We allow it to be dumped into this community asset, which is our one and only atmosphere. So that has to change, and there’s really only one entity that can do that. So we have proposed a cap-and-trade system to stop that unlimited pollution, to use the forces of the market to efficiently allocate scarce permits to allow CO2 into the atmosphere. That’s just one of 500 things we need to do, but it’s probably the granddaddy of them all.

MJ: Aside from signing your bill into law, what would you want to see the next president do in his or her first 100 days?

JI: I think the first day is actually the most important. I would like to see whoever is our next president dedicate a significant part of their inaugural address to this challenge. We have to ignite the nation’s energies and passions on this to make this happen. I think we do need the same kind of inspiration we had from Kennedy in his inaugural address in 1961. I hope it starts on the first day, to call the nation to that higher vision, and I’m hopeful that we’re going to have a president that is willing to do that. Because it is absolutely fundamental.

MJ: Have you endorsed either Democratic candidate yet?

JI: I’ve endorsed Senator Clinton, and I believe her plan demonstrates a real passion for the subject and is probably the most comprehensive. Senator Obama shares a lot of the ideas of Senator Clinton and I applaud that. Senator McCain is sort of a distant third, better than the current occupant, but we were certainly disappointed when he didn’t vote with us a couple months ago to stop us from taking the tax breaks back from the oil companies and giving it to renewable energy. That was very disappointing.

MJ: The U.S. could stop using oil or coal but China and India will just use whatever is left.

JI: We could never light another match, and if China continues to build one coal-fired power plant a week, we are doomed. China is going to have to have new technologies made available to it to stop this. They’re not going to live in poverty. We can’t tell China what to do if we don’t do it ourselves. You don’t inspire someone to take an action by refusing to take it yourself. We are in a race to be the dominant clean-energy provider to the world. Maybe this goes without saying: We’ve got to get China into an international protocol and the magic words are “common responsibility with differentiated action.” We have a common responsibility with different numerical targets, and that’s the situation ultimately we are going to have with China. We emit six times more per person than they do. It’s hard to tell them to cut theirs in half right now until we start moving. Being the ostrich with your head in the sand and tail feathers in the air like some would have us to do while China continues to pollute is simply not an option.

MJ: Do you have a specific objection to the term “energy independence”?

JI: I don’t use that term. I talk about reducing our dependence on foreign oil. If we’re buying electricity from a solar-thermal plant in Tijuana, I’m not sure we should say that’s evil. If we are buying wind power from Alberta, I don’t have a huge objection to that.

MJ: What do you think is the most promising new energy source?

JI: Not wasting energy. It is the least sexy, but the single most important and always the least expensive. You would be very interested in a report by the McKinsey consulting firm that concluded that 40 percent of everything that we have to do to mitigate our emissions are net economic winners. They are cost effective and the most cost effective is not wasting energy. That’s actually going to be the largest part of this whole journey, I believe—using less energy with the same beneficial results.

MJ: Obviously, you want to keep a lot of options on the table, but do you think any of these sources of energy are overhyped?

MJ: When do you think we will see the last gasoline-powered Hummer on the streets?