Most of us were introduced to the Moken last winter, when there was a brief flurry of stories on how the “sea gypsies” of Thailand and Burma managed to escape the tsunami by reading the language of the ocean—a language exceedingly familiar to a people who spend all of their lives in or very close to the water. It was a heartening tale, in a context where those kinds of tales were hard to come by, and it gained intrigue from the other tidbits we learned about this remote tribe: how their four-year-olds can swim in waters 20 feet deep and adults can dive to 200 feet (most of us conk out by 30 feet); how throughout most of history they lived on boats, coming in to terra firma for only a few months each year; how Moken children have learned to constrict their pupils to see 50 percent better under water than we can, enabling them to go harpooning without goggles and find tiny shells on the ocean floor.

All of which is true, and amazing. But there’s one more story that, perhaps, we should also have heard: how the Moken have been struggling to maintain their lives and livelihoods in a world that claims to admire them but has little room for their expansive relationship with the natural universe. For starters, their ancestral fishing grounds are bisected by the tightly patrolled Thai-Burma border; thus, after centuries of plying the ocean to find spouses or visit family, the Moken are now isolated from their relatives much as European families were divided by the Iron Curtain. Little is known about the lives of Burma’s Moken. On the Thai side, the entire population has been forced to settle in the Surin Islands, a national park, where they are forbidden from cutting down large trees (a conservation-minded rule that instantly put an end to their houseboat-building, and thus their lives at sea) and collecting shells to trade. Instead, they are marketed as a sightseeing attraction and encouraged to sell handicrafts to tourists. All the usual curses of modernity have arrived on the islands, from junk food and booze to much worse. One village elder told photographer Andrew Testa that no fewer than 10 Moken, out of a population of 200, have come down with AIDS after trips to the mainland, and that his own son died of the disease.

All of which makes Testa’s photographs all the more compelling—for what they document is a culture that, in the face of such challenges, has maintained a remarkable degree of self-reliance. Like the Moken, Testa found himself spending much of his time in the water, following bands of kids as they swam, dove, and leaped off stilt-built houses into the ocean (no fears here of sharks, octopi, and the other creepy-crawlies that keep Western kids marooned on the beach). There’s a joy in these photos that you don’t often see in the land of the PlayStation 2, a balance and sheer grace that seem both effortless and unshakable. Maybe for a people who can outrun tsunamis, industrial civilization is no match either. 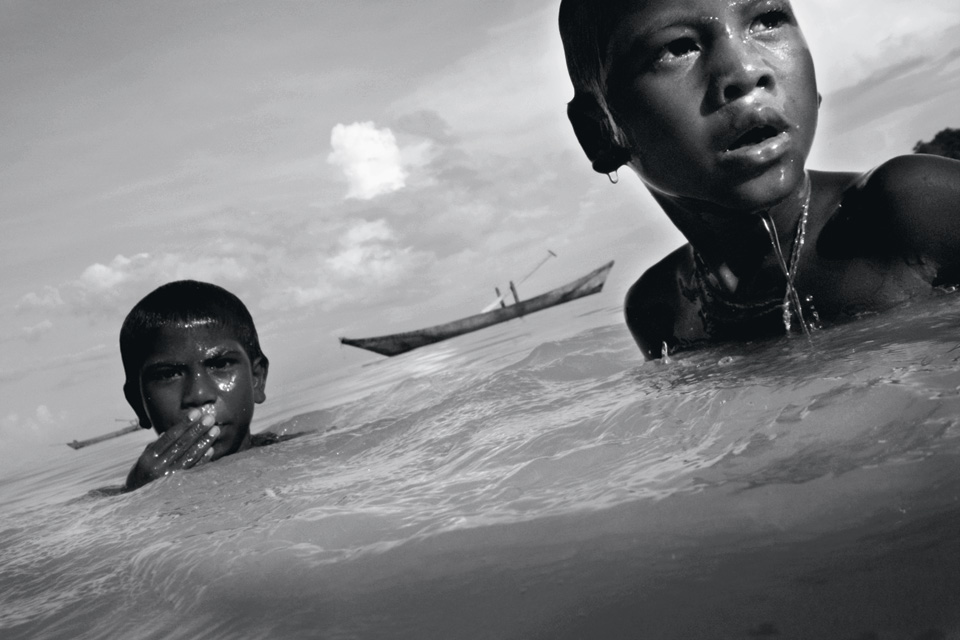 By the agen when Westerners start going to school, Moken children spend much of their time under water. Moken elders can dive to 200 feet, with no equipment except a pair of wood-carved goggles.

Among the few things to draw the Moken inland are prayers at the graves of their ancestors.

Though the Surin Island Moken can no longer build live-aboard boats, their houses skim the water’s edge, and men and boys head far out to sea on rough-hewn fishing vessels.