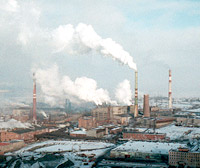 The Bush
administration is high on hydrogen. The president’s proposed 2005 budget includes $228 million
to help businesses develop better hydrogen fuel cells, triple the assistance the federal government
provided in 2001. What’s left unsaid in his speeches about America’s potential to “lead the world
in developing clean, hydrogen-powered automobiles” is that the initiative holds out a massive
windfall for Bush insiders and well-connected lobbyists, not to mention a Russian oligarch with
a history of shady dealings and environmental destruction.

The source of this prospective fortune is the Montana-based Stillwater
Mining Co., which is the only domestic producer of two platinum group metals (PGM) — platinum
and palladium. Last year Vladimir Potanin, a Russian billionaire whose empire already includes
vast PGM reserves in Siberia, took control of Stillwater. Regulators from the Treasury Department,
the Securities and Exchange Commission (SEC), and the Federal Trade Commission (FTC) quickly
approved the deal even though it gave Potanin greater power over metals that could be critical to
the nation’s future.

To understand what this has to do with hydrogen and why there’s so much
money at stake, begin with this fact: Fuel cells will use platinum or palladium as a catalyst. The
metals speed the process by which hydrogen combines with oxygen, releasing energy that could power
a vehicle. The metals also could be used in storing hydrogen and are already used in catalytic converters.
If the market for fuel cells booms, so too will demand for palladium and platinum. There are only
a few locations in the world that mine platinum metals, and the largest producer of palladium and
the second largest of platinum is the Potanin-owned Norilsk Nickel Mining Co. on the Taimyr Peninsula
in Siberia.

In November 2002, when the Russian company bid $100 million in cash and
$241 million in palladium to buy a majority stake in Stillwater, the offer should have set off alarm
bells for federal regulators. For starters, the Russian mining giant has ravaged the environment:
Its excavations and smelters belch more than 5,000 tons of sulfur oxides into the air in Siberia
every day, according to a report in the Guardian. Norilsk Nickel’s soot, smoke, and wastewater
have turned the local air sour and the snow black, and are destroying the surrounding tundra for
hundreds of miles. What’s more, the city of Norilsk was founded as a gulag, and the company’s workers
remain poorly treated, with their life expectancy below the Russian average.

Little is known about Norilsk Nickel: The company and Potanin operate
in secrecy. Norilsk does not disclose such basic information as how many ounces of metal it has stockpiled
or how much it pays its executives. The firm is one piece of Potanin’s larger empire, controlled
by his Interros investment company, which he established after expropriating huge swaths of
Russia’s wealth following the collapse of Communism. Interros also controls Uneximbank, launched
in 1993 and now Russia’s second-largest retail bank. It was through the bank’s role as auctioneer
for the Russian government that Potanin was able to buy Norilsk Nickel in 1997, even though his bid
was several hundred million dollars less than the top offer.

So how did Norilsk Nickel win such easy approval for its acquisition
of Stillwater, taking eight months for a process that critics say should have lasted longer? A look
behind the scenes reveals that influential people, with clout at the White House, had much to gain
by pushing it forward.

Norilsk Nickel hired Baker Botts, the lobbying firm headed by longtime
Bush family political adviser James Baker III. Baker Botts assigned a special counsel named Diana
Dietrich, a former Federal Trade Commission litigator, to plead Norilsk Nickel’s case before
the agency where she used to work. The Russian company also put forward the group it planned to add
to Stillwater’s board of directors after the takeover, and four of its five nominees are neither
Russians nor mining executives, but American power players. They include Craig Fuller, the former
chief of staff to then Vice President George H.W. Bush; Steven Lucas, a partner at Nielsen-Merksamer,
a California firm specializing in lobbying and electoral law; former Senator Donald Riegle (D-Mich.),
who served as chairman of the Senate Banking Committee; and Todd Schafer, who works in Moscow for
the lobbying firm Hogan & Hartson and has assisted Potanin in battling challenges to his control
of Uneximbank. Stillwater vice president John Stark says that his company proposed some of these
nominees to Norilsk Nickel, while others were suggested by the U.S. Chamber of Commerce.

In December 2002 — one month after the deal was announced — the
Treasury Department, which has to approve foreign purchases of strategic assets, okayed the deal.
Then the SEC gave Norilsk Nickel’s accounting practices a pass, clearing the way for it to acquire
a company listed on the New York Stock Exchange. “It’s pretty odd that it was allowed to go through
without any extensive checks,” says Brad Shorey, president of Local 8-0001 of the Paper, Allied-Industrial,
Chemical and Energy Workers International, which represents Stillwater workers.

Meanwhile, Stillwater’s executives, who stood to gain millions in
golden parachute payments and stock options from the deal, wooed shareholders to vote for the sale.
They commissioned an evaluation of the acquisition from J.P. Morgan — and made $4 million
of the bank’s $5 million fee contingent on the deal’s approval. Stillwater investors accepted
Norilsk Nickel’s offer on June 16, 2003 — the same day the FTC declared itself unconcerned
by the transaction’s anti-trust implications. “Given the market shares involved,” says Bernard
Black, a Stanford Law School professor, “it is puzzling that this was approved by the FTC.” Doug
Donald, an independent portfolio manager who assembled a competing bid that Stillwater executives summarily rejected, contends, “The FTC went against all their precepts.”

The lobbyists and government officials involved in the transaction
decline to comment on the deal. Stillwater’s directors refer questions to the company, where Stark
says, “It took just about the time we expected.”

The deal has ramifications beyond hydrogen fuel cells. “The business
side of this goes back to Russians wanting a way to get their capital into an American asset,” says
Tim Wood, a correspondent for the trade publication Mineweb. “It’s like putting your money into
a washing machine — it spins around, comes up in a different place.” In this instance, Norilsk
Nickel gained access to the New York Stock Exchange. “The number of people who can achieve that is
very limited,” adds Wood. “I can’t think of any ex-Democrats who are successful Russian fixers,
but the Baker people have been.”

So now Norilsk Nickel is working with the Russian Academy of Sciences
to develop the fuel-cell technology that could someday be to the U.S. economy what gasoline is today.
And Stillwater’s directors are already seeing the benefits. After Norilsk’s takeover, the annual
payment to Stillwater board members increased to $40,000 from $15,000. Directors also received
stock-option packages that as of March were worth more than $100,000 each. That’s because Stillwater
shares had more than tripled in price in the 14 months after Bush revealed, in his 2003 State of the
Union address, his hopes for hydrogen fuel cells.