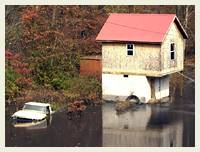 The US Environmental Protection Agency called it the worst environmental disaster ever to strike the southeastern United States: On October 11, 2000, a 72-acre coal-slurry pond in Martin County, Kentucky, collapsed into the coal mine below it. More than 300 million gallons of sludge rushed into nearby creeks and the Big Sandy River, smothering 110 miles of waterways in Kentucky and West Virginia. In some places the sludge, a residue from coal processing, was more than seven feet thick. “It was like the thickest chocolate shake,” says Mickey McCoy, who lives in Inez, a nearby town that was saturated with slurry.

The spill, which released about 30 times more liquid than the Exxon Valdez, poisoned water supplies in many communities and killed most aquatic life. “If this had happened in Connecticut, there would have been a hell of an uproar,” says one government of

More than a year later, contamination from the spill persists, and many experts worry that the disaster will not be the last of its kind. There are more than 500 slurry ponds scattered throughout Appalachia and hundreds more around the country, many of them abandoned and unmonitored. An estimated 200 sit atop mines. “In a lot of places, it’s like a honeycomb,” says Kentucky lawyer Tom FitzGerald, who is

In October, a report from the National Academy of Sciences called for tighter federal oversight of slurry ponds but left the specifics to the federal Mine Safety and Health Administration. But critics say the agency has known about the problem for years, yet has failed to act. “They’re papering it over, wringing their hands, while studiously avoiding the things that need to be done because it will cost the industry money,” says FitzGerald. A spokesman for the mining safety agency says the agency is reviewing its procedures for approving new slurry ponds but “can’t guarantee” that the existing ponds are safe.

But by failing to crack down on the ponds, safety advocates say, officials may be inviting disaster. “Instead of waiting for a failure to occur, we should address the problem,” says Davitt McAteer, who headed the mining safety agency during the Clinton administration. “We have enough evidence of failures that we should be on the alert. We should deal with it.”

Meanwhile, Appalachians continue to wrestle with the legacy of the Martin County spill. The pond’s owner, Massey Energy, says cleanup is complete, even though almost none of the sludge-which according to federal regulators contains dangerous levels of six toxic metals-has been removed from West Virginia rivers. A group of residents has filed suit against the company, complaining that their property was contaminated with arsenic and mercury. “When it rains,” says attorney Ned Pillersdorf, “the creeks still turn dark because of the sludge.”