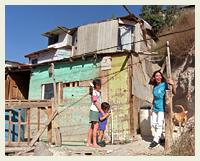 MACLOVIO ROJAS, Baja, Mexico: From the tiny interior of a shack made of old garage doors and corrugated metal, electrical wires wrapped in duct tape run outside to a dusty road. Partly frayed and exposed, the wires travel through this settlement on the outskirts of Tijuana, wrapped around fences, pulled across roads, occasionally strung up high on unstable beams, until they reach their destination: a government-owned power line.

It’s a setup that would make any safety inspector cringe. But an estimated 30,000 families in Baja California get their power this way, by illegally siphoning electricity from the area’s power grid. For years, the government has turned down residents’ requests for legal access.

It’s not that there’s any shortage of power in Baja. In fact, cashing in on California’s energy woes earlier this summer, local power producers began exporting record amounts of energy to the north. At the same time, the Mexican government has begun encouraging American power companies to build plants in the area, a campaign that has already yielded at least two new plants slated for construction. That’s good news for the Southern Californians who will be the plants’ main customers, but not for local residents. Thanks in part to Mexico’s lax environmental regulations, those new plants are expected to generate thousands of tons of pollutants every year — a nasty side-effect that will be felt mainly by people who can’t even legally access the electricity that causes it.

Allowing foreigners to own and operate power plants in Mexico is a new concept. Until last year, all of the nation’s power plants were government-owned, though often run by private companies. But now, Sempra, a San Diego-based power company, is building its own 500-megawatt, gas-fired plant near Mexicali, slated to be operational by 2003. All of its electricity is scheduled for export to California. The other plant, a natural gas and diesel-fueled facility owned by Boston-based InterGen, will send about a third of its 1,000 megawatts across the border.

A recent report by the Air Pollution Control District in California’s Imperial County, just six miles away on the US side, found that the two plants could release as much as 5,500 tons of pollutants a year into the surrounding communities. That includes carbon monoxide, which has been linked to prenatal organ damage and low birth weights, and nitrogen oxides, which contribute to respiratory illnesses in children and throat and lung damage in adults.

Mexico’s controls on carbon monoxide and nitrogen oxide emissions are much less stringent than in the US. Sempra officials insist their plan would satisfy US environmental regulations and will be the cleanest in Mexico. Even so, the Imperial County study predicts it will produce 377 tons of pollution per year. The InterGen plant, meanwhile, is expected to produce ten times that amount of pollution, thanks largely to emission levels that would not be allowed north of the border.

InterGen environmental consultant Joel Epstein says the company is limited in its ability to reduce emissions, because it is required to sell half its projected output to Mexico’s Federal Electricity Commission. Adding emissions controls to all four of the plant’s gas turbine generators would make it difficult to reach that quota, he says: “Whenever you add a piece of equipment, it takes away a piece of the power.” As a compromise, InterGen recently agreed to add smog-reducing technology to two of the plant’s generators.

That’s not good enough, says Imperial County Air Pollution Control Officer Steve Birdsall, who has been meeting with InterGen officials in an effort to further reduce emissions. “We don’t quite agree with (InterGen’s) assessment” that adding pollution controls to all four generators would decrease efficiency and drive up costs, he says. Repeated requests by Imperial County officials for a copy of the contract between InterGen and the Mexican electricity commission have been denied.

While northern Baja residents can look forward to inhaling plenty of extra carbon monoxide in coming years, they seem unlikely to get electricity any time soon. Electricity commission officials say they can’t deliver power until the federal government gives them funding to extend power lines into outlying communities.

Government officials blame the problem on the maquiladoras — foreign-owned factories where products are assembled for export. Since NAFTA knocked down trade barriers in 1994, workers from Mexico’s rural south have been pouring into border states, including Baja, in search of higher wages. Many of them live in poor settlements near the factories where they work, earning $5 to $10 a day.

“There are people coming every day and they establish anywhere they can, sometimes illegally,” says Manuel Garcia Lepe of the Baja California Secretariat of Economic Development, the government agency responsible for attracting foreign businesses to the region. This rapid influx of workers makes it difficult for the state government to keep up with infrastructure, he says, especially when most of the federal tax revenue from these new factories does not come back to the region because it is first filtered through Mexico City.

The prevailing official philosophy is that bringing foreign business into Baja benefits everyone. But those who are left behind as the region becomes polluted and outgrows its infrastructure aren’t so sure.

“The government doesn’t worry about us. All they care about is doing business with the US,” says Hortencia Mendoza, president of Maclovio Rojas, a 1,000-family community that sits on a Tijuana hilltop surrounded by maquiladoras where most of the residents work. “What can we do?” she says, shrugging. Like thousands of other Baja residents, for now, she is literally powerless.