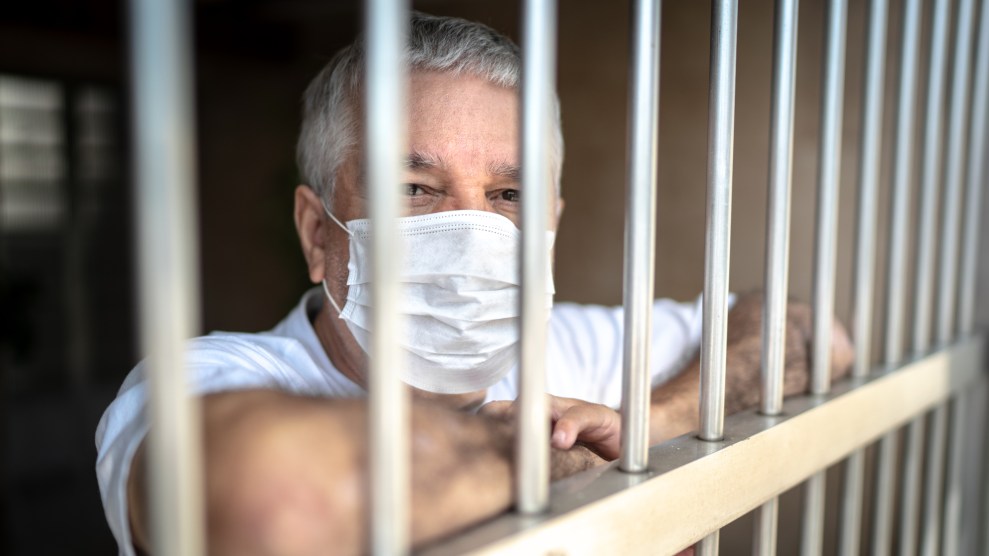 In June, the ACLU, on behalf of half a dozen detainees housed in various Orange County jails, sued the sheriff in state court, arguing that the jails were superspreaders-in-waiting: the cramped quarters, inadequate cleaning protocols, and severely limited hygiene make jails an ideal hunting ground for the virus. Many detainees are at heightened risk of getting gravely ill because of underlying health conditions (according to the lawsuit, the county has already identified more than 500 inmates at risk of serious infection). But the jails don’t usually have robust health care facilities on site, so, the lawsuit argued, infected inmates would need to be transferred to one of the county hospitals if they require a ventilator or other specialized care. Given the strain on hospitals that already exists, adding in patients from a jail outbreak “could result in a humanitarian disaster.”

After months of hearings, a judge ruled last week in favor of the ACLU and ordered the jails to cut their populations in half—by either releasing or relocating detainees—to allow for adequate social distancing in the facilities. Superior Court Judge Peter Wilson’s order builds on a similar ruling from a California appeals court back in October, which required San Quentin prison to drastically reduce its inmate population. Both Wilson and the appeals court panel found that corrections officials had shown “deliberate indifference” toward the health and safety of their charges, in violation of a myriad of state and federal constitutional rights. The Orange County Jails were specifically found to have violated the state constitutional rights of pre-trial detainees, as well as those of disabled inmates.

“We have seen again and again in this suit and in similar litigation around the country, corrections officials have not taken the necessary steps to protect incarcerated people from the spread of COVID-19, nor have they been honest about the circumstances and risk levels in their facilities,” said Cassandra Stubbs, director of the ACLU’s Capital Punishment Project in a statement shortly after the ruling. “Public health experts and epidemiological studies have been clear: This country won’t be able to get the pandemic under control unless we’re able to get it under control in prisons and jails.”

In a court hearing, lawyers representing Orange County argued that the jails had already decreased their populations and implemented other safety measures—including mandatory temperature checks, scaling up COVID testing, and providing staff with PPE—claiming to have created a “COVID bubble” among the jails. But that bubble has clearly popped: As of Tuesday, more than 400 people in the county’s jails had tested positive, compared with just 74 the week before.

“Jails are not closed off from the communities around them,” says the ACLU’s complaint. “[E]very day, custody, medical, and support staff and contractors who have direct contact with detainees enter and leave the facility, along with detainees who are newly booked into the jail, leave and return for court hearings, and leave upon release.”

By one estimate, prisons and jails were linked to half a million new COVID cases this summer alone. In California, researchers from the Prison Policy Institute concluded that more than 113,000 cases were linked to mass incarceration.

In Orange County, Sheriff Don Barnes has until the end of the month to submit to the court a plan to release or relocate the necessary detainees. So far, only two of the plaintiffs on the case have been released. Barnes took to Fox News this week to say he would not comply with the order, because the jail’s remaining detainees “posed a serious threat” to the community. He said the county plans to appeal the ruling.