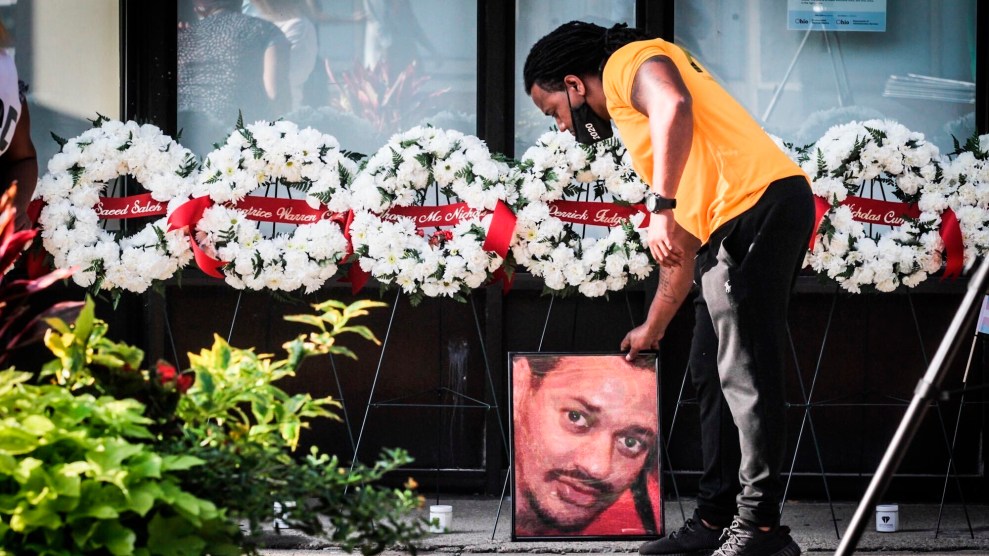 In Dayton, Ohio, residents mourn the victims of a mass shooting one year later.Jim Noelker/AP

Last night, at least 21 people were shot at a cookout in Washington, DC. Christopher Brown, a 17-year-old, was killed. Three weeks ago, nine people were shot in front of a restaurant in the capital. In July, there were four shootings in Detroit in which at least four people were killed or wounded. In Chicago, 14 people were shot outside a funeral home in late July.

As Americans locked down and classrooms and public places emptied this spring, there was speculation that one silver lining of the pandemic would be fewer large-scale shootings. But that has not happened.

In March, the number of people killed by shootings involving at least four injuries doubled in comparison with a year earlier. Perhaps this was the result of the lag time due to lockdowns rolling out at different speeds. In April, there was a major dip (24 percent) in the number of large-scale shootings. Yet since then, there hasn’t been a sustained decrease in the violence. The Gun Violence Archive has recorded 262 shootings with four or more injuries that have occurred across the country since April. In May, there were 59 such shootings, more than any month since the archive began collecting data in 2013. That was quickly topped by June (95) and July (87).

These shootings aren’t covered in the same way as the bloody rampages in schools, churches, stores, and night clubs that have come to be seen as an “epidemic.”

Part of the issue is which incidents are considered mass shootings. The Gun Violence Archive uses a broader definition than many outlets. Taking its lead from the FBI and criminologists, Mother Jones‘ own database of mass shootings defines a “mass shooting” as a single attack in a public place in which four or more victims were killed. This effectively codes out incidents like the one in Washington, DC, yesterday. (Unless three more victims die, in which case it would be considered a mass shooting.) Yet, the shootings that don’t get the mass shooting designation still cause a massive human and economic toll. And no matter how they are labeled, they’re key to understanding the current calls to change policing in America.

As Samantha Michaels notes in her recent Mother Jones feature on efforts to stem gun violence in Oakland, California, for “Black men between the ages of 15 and 24 in the United States, homicide, mostly by gunfire, is still the leading cause of death by far, killing more of them than the next nine top causes of death combined.” That violence, which often leads local TV coverage even as it’s ignored outside the communities where it happens, has been used to justify the aggressive policing which has in turn sparked the current movement to remake American policing.

More shootings, combined with the coronavirus, could fuel the argument that the solution isn’t fewer, but more cops. In Detroit, police shot two men while investigating the July shootings. D.C. Police Chief Peter Newsham told the Washington Post that he thought that people released from jail because of the pandemic have been behind some of the recent violence. President Donald Trump has used the violence to call for increasing the presence of federal law enforcement in cities such as Chicago and New York.

Chicago and New York City crime numbers are way up. 67 people shot in Chicago, 13 killed. Shootings up significantly in NYC where people are demanding that @NYGovCuomo & @NYCMayor act now. Federal Government ready, willing and able to help, if asked!

The death and chaos of our current moment has perhaps muted our memory of past violence. It’s been a little over a year since the back-to-back mass shootings in Dayton, Ohio, in which 9 people died; and El Paso, Texas, in which 23 were killed. Virtual memorials were recommended by Dayton, fearing an outbreak of COVID-19. In El Paso, residents marched, noting the white supremacy that fueled the rampage. President Donald Trump, who briefly entertained pushing for some gun control measures following those shootings, did not publicly note the anniversary of either.