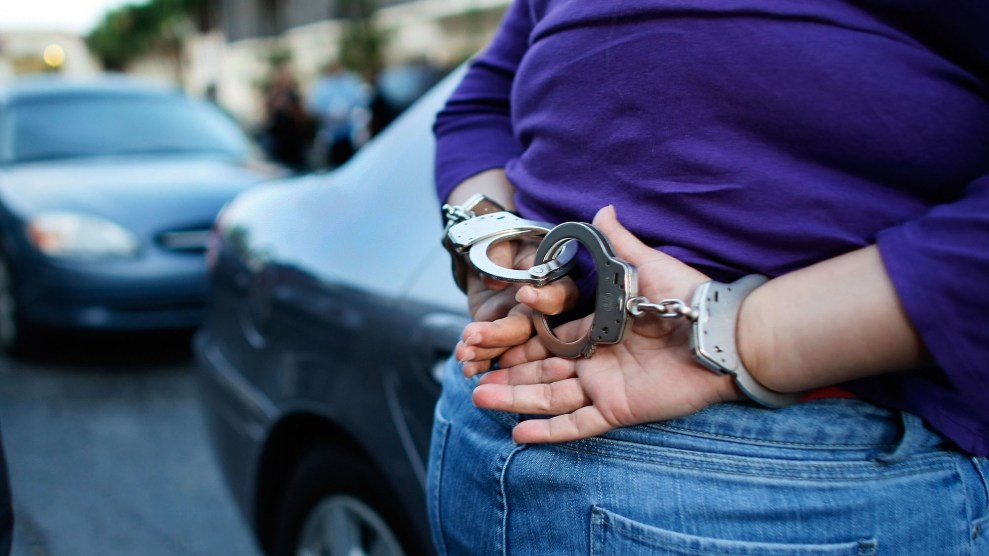 On Monday morning, the police department in Kenosha, Wisconsin, posted a notice on its Facebook page. “Due to the growing concern over the flu, Coronavirus and other sicknesses, the decision was made to cancel all crime in the Kenosha area,” its post said. “We are unsure when this ban will be lifted. We ask anyone who was planning to commit any crimes to please stay home for their safety.”

Tired jokes aside, police across the country are playing a role in trying to fight the coronavirus pandemic. Over the last week, cops have been called to enforce a ban on large public gatherings in Santa Clara County, California; to investigate false reporting about the coronavirus in Newark, New Jersey; and to don gloves, gowns, masks, and eye protection during interactions with anyone who appears sick in Kirkland, Washington, and other hotspots.

There’s another thing law enforcement could be doing to slow the spread of the coronavirus: Stop booking people into local jails, which experts fear could easily become incubators for the disease due to close quarters, poor sanitation, and underprepared health systems.

In ordinary times, crowded jails overlook prisoners’ medical problems and struggle to separate them based on their security classification, says Homer Venters, the former chief medical officer of the New York City jail system. If jails have to add quarantines and sequestration of high-risk prisoners to the mix, Venters predicts they will find managing a COVID-19 outbreak “simply almost impossible.” “For jails and prisons that are already filthy, and have, generally speaking, a low standard of clinical care, and are trained to take care of one person at a time…this will be a very, very difficult process,” he says.

One of the best ways to deal with the inevitable spread of COVID-19 in the jail system is to “decrease the amount of people coming through it,” Venters says. “And you do that on the front end.” Diversion programs, drug courts, and crisis intervention programs that send people to treatment programs rather than jail all can play an important role, Venters says. So do the patrol officers and desk sergeants who exercise broad discretion over who gets arrested, booked, and jailed.

There’s some evidence that law enforcement and elected officials are already thinking seriously about stemming the flow of people through the bloated criminal justice system or releasing them early to protect public health. On Wednesday, Brooklyn District Attorney Eric Gonzalez joined criminal justice advocates and public health experts to call on New York Gov. Andrew Cuomo to grant emergency clemencies to older and sick prisoners. The public defender’s office in San Francisco has been filing motions seeking the release of pretrial detainees who are over 60 or have underlying conditions, as well as all people sentenced to county jail with less than six months on their sentences.

In Santa Clara County, which has had 45 confirmed cases of COVID-19 and one death so far, Sheriff Laurie Smith told the county’s board of supervisors Tuesday that the possibility of an outbreak in local jails was a “huge concern.” More than 3,200 people are locked up in “a really closed environment” in the county’s jails, she said, including 130 inmates older than 60. To lower those numbers, her department was considering paroling inmates considered “criminally low-risk,” releasing them with ankle monitors, or placing them in alternative custody arrangements such as private residences or residential drug-treatment programs.

“Anything that decreases the flow of people into jail is going to obviously decrease the risk that the jail can’t control or respond to the coronavirus once it gets into the jail.”

But Smith was also looking at ways to stop locking people up. She told the board she was planning to ask the probation department to limit probation violations and court staff to postpone sentencing dates. Meanwhile, the sheriff’s department is encouraging its officers to only book suspects for felonies, not misdemeanors, according to Deputy Jessica Gabaldon. “Anyone who can be cited and released, you will,” Gabaldon said.

In Seattle, while police have not been officially instructed to send fewer people to the county jail, officers have “a lot of discretion” in who they book for low-level crimes, Seattle PD Sgt. Sean Whitcomb says—especially if the person being arrested appears sick. “If it’s a serious enough crime—gun violence, for instance—we have the capacity to guard them, and we can do so in a way that’s safe for us,” Whitcomb says. “But if someone just shoplifted a T-shirt, or didn’t pay for their lunch at a restaurant, these are things that we could just take a report and refer it to the prosecutor’s office for future filing consideration.”

In Westchester County, New York, one of the worst coronavirus hotspots, New Rochelle Police Capt. Cosmo Costa said his department has rolled back some services, such as dispatching officers to respond to low-level 911 calls for emergency medical services. Asked if New Rochelle police would reduce arrests for low-level crimes, Costa pointed to New York’s newly enacted bail reform law. The law requires judges to release people accused of misdemeanors and non-violent felonies—which make up about 90 percent of arrests—at arraignment, or impose non-monetary conditions on their release, like electronic monitoring. Since January 1, Costa said, most people arrested by his department’s officers are now given a ticket to appear in court rather than being sent to jail.

But could bail reform—which is facing backlash in New York and is currently is on hold in California—really be a protective factor against the spread of coronavirus inside jails? “That’s a good question,” Venters says. “And I don’t have the answer to it.” But, he adds, “anything that decreases the flow of people into jail is going to obviously decrease the risk that the jail can’t control or respond to the coronavirus once it gets into the jail. Whether it’s bail reform or drug court or mental health court or veterans court, or a diversion center.” About 6,800 fewer people per day were in New York state jails in February 2020 compared to February 2019, according to the state’s division of criminal justice services.

Rolling back policing of low-level crimes during the pandemic may not only be in the public interest—it could also protect officers from exposure to COVID-19. “Police officers, just through the nature of our job, whether it’s taking a report from someone or arresting someone for a crime, we don’t always know what’s going on with them health-wise,” Whitcomb says. At least three police officers in Kirkland had been exposed and were quarantined as of Tuesday, according to Kellie Stickney, a public information officer for the city. One showed COVID-19 symptoms.

Venters suspects that even without a formal policy, individual police officers might start limiting enforcement on their own. “If they don’t want to enforce,” Venters says, “they know how to do that.”