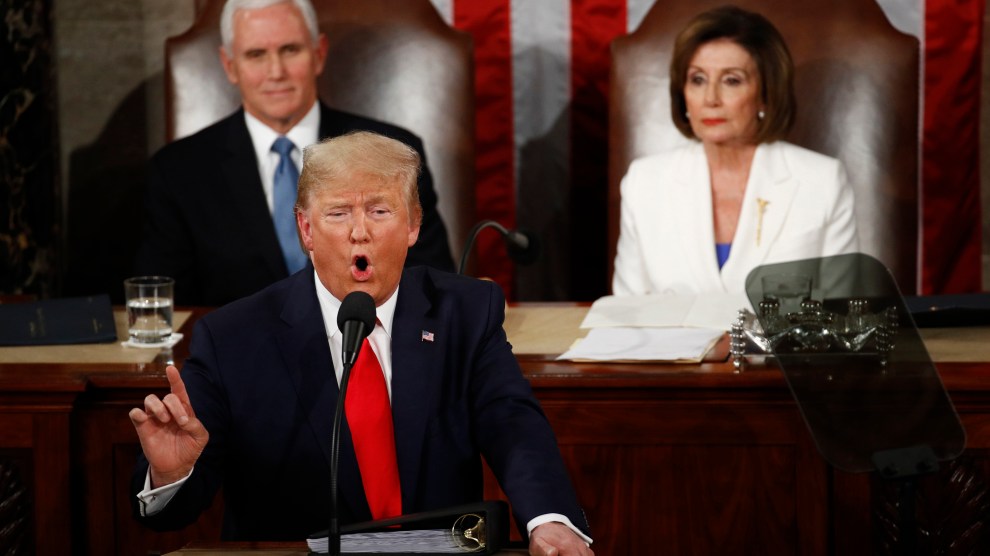 President Donald Trump delivers his State of the Union address to a joint session of Congress on on Tuesday, as Vice President Mike Pence and House Speaker Nancy Pelosi watch. Patrick Semansky/AP

As Trump claims credit for freeing people from prison, there’s one very big problem that he’s not mentioning.

Yes, it’s true that Trump—the same man who recommended heavier enforcement of stop and frisk policing, and whose administration brought back the federal death penalty and fueled the expansion of private prisons—signed a much-heralded bill in 2018 to reform the federal criminal justice system, with broad bipartisan support. The First Step Act made changes that have reduced the federal prison population, and it was the first criminal justice reform bill to pass Congress in a generation. So far, the law has shortened the prison stays of about 2,500 people who were serving disproportionately long sentences for crack cocaine offenses, most of them African American. It has also let more than 3,000 people go home early because of their good behavior during incarceration. And it could lead to improvements in prison conditions.

But as Trump claims credit for freeing people from prison, there’s one very big problem that he’s not mentioning: His Justice Department is actively pushing to send some of these same people back behind bars, and to prevent others from reducing their sentences—which greatly limits who can benefit from the law that Trump has touted as one of his signature achievements.

While the First Step Act has allies in the White House—including Trump and his son-in-law Jared Kushner—the officials tasked with implementing it are in the Justice Department. Attorney General Bill Barr, who leads the department, has reportedly raised concerns in private that the legislation’s reforms will drive up crime. And under his watch, the department’s prosecutors have argued that hundreds of incarcerated people applying for relief under the law’s cocaine sentencing reforms are not eligible, according to an investigation by the Washington Post. In some cases, Trump has even stood onstage hugging and congratulating people who were recently released under the law—even as the Justice Department was arguing in court to lock those same people up again.

The Justice Department’s attorneys are now trying to argue that some of the people released early through the First Step Act with drug charges should return to prison. The agency says that some people were convicted of possessing less crack than they actually did, and that judges should consider the larger amount when making decisions about who to set free. Most judges have not listened, but at least five have agreed, according to the Post. Other judges put their decisions on hold amid the confusion, keeping incarcerated people in limbo. Last year, Rep. Jerrold Nadler (D-N.Y.), the chairman of the House Judiciary Committee, said he believed the Justice Department was “trying to sabotage” the First Step Act by pushing to keep these inmates behind bars.

Trump’s remarks during the State of the Union address suggest that he will continue to make criminal justice reform a bragging point ahead of the 2020 election. During the Super Bowl last weekend, his reelection campaign ran an ad about Alice Johnson, a grandmother who was serving a life sentence for trafficking crack, and who was freed in June 2018, months before the First Step Act, when Trump granted her clemency. “Thanks to Trump, people like Alice are getting a second chance,” the ad says.

But the ad didn’t share the whole truth. Compared with past presidents, Trump has been shockingly slow to grant clemency to incarcerated people. So far, he has made decisions on only 204 requests for commutations or pardons—and has only approved 24 of them, according to another Washington Post investigation. For comparison, Barack Obama granted a record-setting 1,700 commutations during his tenure.

And Trump has mostly offered relief to incarcerated people with powerful connections. Johnson, for example, came to his attention after Kim Kardashian told him about the grandmother’s story. Trump’s first-ever pardon went to Arizona Sheriff Joe Arpaio, who ignored a federal judge’s order to stop arresting immigrants, and who hadn’t even filed a petition for a pardon. With Kushner’s support, celebrity lawyer Alan Dershowitz successfully urged Trump to commute the sentence of Sholom Rubashkin, an Orthodox Jew serving time for financial fraud after a raid on immigrants at his meatpacking plant. A whopping 19 out of the 24 people who received clemency under Trump so far had personal connections to the White House or influence with the president’s base, the Post reports.

Trump wants to convince the American people that he’s all about second chances. “I promised to restore hope in America. That includes the least among us,” he tweeted along with the Super Bowl ad. But the truth is that he reserves most of his second chances for people with celebrity connections or a story that benefits him politically. While he’s granted clemency to 24 people, another 13,000 who applied are still waiting for freedom.