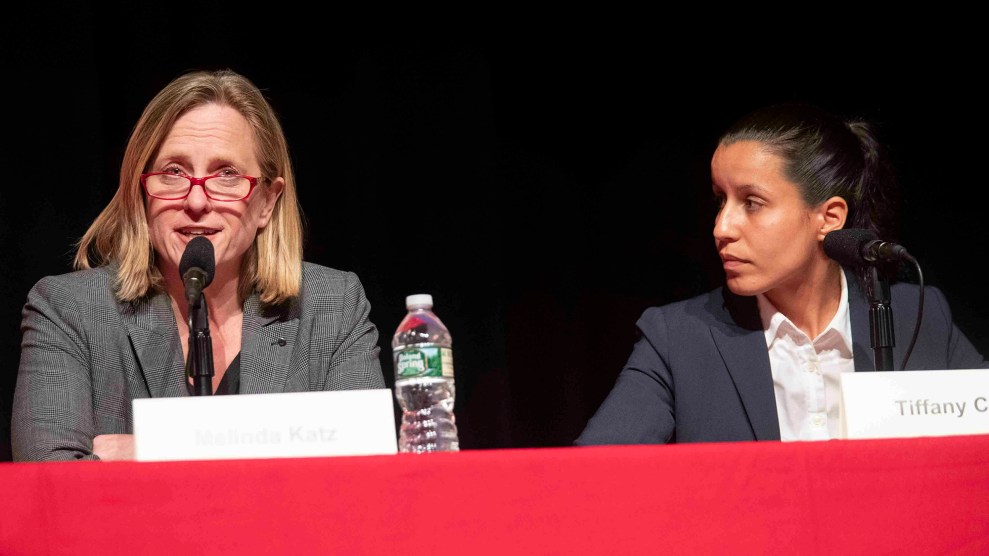 Update (August 6, 2019): Six weeks after the primary election, following a recount and a judicial review of contested ballots, Tiffany Cabán has conceded defeat in the race for Queens district attorney. Her rival, Borough President Melinda Katz, won by 55 votes. “This election may be over,” Cabán told her supporters during a concession speech, “but the organizing does not stop, it will not stop. I look forward to continuing to fight alongside y’all, and we are just getting started.” In a statement, Katz thanked Cabán “for bringing closure to this long and hard-fought race.”

Update (July 25, 2019): The recount has ended, and Melinda Katz is declaring victory over Tiffany Cabán in the race for Queens district attorney, ahead by roughly 60 votes. But there’s still some hope for Cabán: The election board won’t release the official tally for days. And because the recount results are so close, Cabán’s campaign will argue in court that election officials should also count dozens of affidavit ballots that were deemed invalid. “This race is not over,” Cabán said.

It’s been a wild ride for anyone watching the Queens election for district attorney, a race that has captivated the attention of criminal justice reformers around the country. When the polls closed in the Democratic primary last month, Tiffany Cabán, a public defender whose bid once seemed like a long shot, declared victory. With 99 percent of precincts reporting, she was about 1,100 votes, or 1.3 percentage points, ahead of rival Melinda Katz, a career politician and the Queens borough president. Cabán’s stunning upset was cheered by progressives like Rep. Alexandria Ocasio-Cortez and Sens. Bernie Sanders and Elizabeth Warren, all of whom had backed the 31-year-old queer Latina who promised radical reforms for one of the country’s biggest, most diverse jurisdictions.

And then, everything flipped. Last week, after election officials finished counting a few thousand absentee and affidavit ballots, they declared that Katz had pulled ahead by 20 votes. It was a shock to Cabán’s supporters, who saw her win as a growing sign of momentum in a national movement to elect more progressive-minded prosecutors. The Queen’s district attorney office had been run for decades by Richard Brown, who had a reputation for doling out punishments for low-level offenses. Both candidates promised reform, but Katz’s platform was more moderate than Cabán’s: While Cabán said she believed sex work should be decriminalized, Katz said she would continue prosecuting customers; while Cabán’s campaign was entirely grassroots, Katz accepted corporate donations; and while Cabán pledged to stop charging people for broken-windows offenses like turnstile jumping, Katz said she would only reduce prosecutions of these offenses.

It remains unclear which version of reform will win out. The 20-vote margin was so small it triggered an automatic recount, which is expected to begin Wednesday or Thursday and could take at least 10 days to complete. Elections officials will manually review about 91,000 ballots to see if the scanners missed anything. During the recount, officials can include the votes even for ballots that weren’t filled in correctly as long as the intention of the voter is clear—like if they put an X or a check mark next to the oval, or if they drew a circle around a candidate’s name. With such a small gap between Katz and Cabán, the results could easily flip again, says Sarah Steiner, an election lawyer and former chair of the New York City Bar Association’s election law committee. “The hand recount is always different from the scanner count,” she says.

There’s another factor that could swing the results: the affidavit ballots. Also known as provisional ballots, these are taken from people at the polls whose names don’t show up on the rolls, but who insist they are eligible to vote. Usually, about three-quarters of them are later deemed ineligible and their votes aren’t counted. In New York, this can be for a variety of reasons, including if the person showed up at the wrong polling site or never registered to vote, or if they registered under the Green Party but are trying to participate in the Democratic primary. But it can also be the result of a mistake by election officials. Last week, attorneys for Cabán convinced officials to count a handful of the 2,300 affidavit ballots that were initially deemed invalid, bringing Katz’s lead down from 20 votes to 16.

On Tuesday, both sides were at the Queens County Supreme Court to argue over which affidavit ballots should be counted. Cabán wants elections officials to include dozens of ballots—likely around 70 or 80—that were invalidated because voters made a small technical error: They did not fill out a single line noting their party affiliation on a form accompanying the ballot. Cabán’s team suspects that many of these invalidated ballots belong to her supporters, who tend to be younger or newer to the political process. According to a spokesperson for the Katz campaign, the judge could make a decision about these ballots when both sides come back to court on July 17, or more likely once the recount concludes if the election results are still close. “Since the beginning of this process, when we were behind by 1,100 votes, we insisted that every valid vote count, and now that we are ahead by 16 votes, our principal remains the same, that every valid vote should count,” says the spokesperson.

In the past, New York law has been strict about this kind of mistake—elections officials could not count affidavit ballots unless every line of the form was completed. But according to Steiner, courts have started ruling that ballots can be included if the voter made a slight error but “substantially complied” with instructions on the form. And New York lawmakers recently passed a bill codifying those court decisions. In theory, says Steiner, the new law would allow these affidavit ballots to be counted. It has yet to reach the desk of New York Gov. Andrew Cuomo, who is expected to sign it. Given these developments, “my guess is the court will allow these ballots to come in,” says Steiner.

In a race this tight, she adds, with such a small margin between candidates, every vote that’s counted—or not—will matter: “You can win by one, and you’ve won. Where it’s going to go from 16, I would never dare to guess on something this close.”