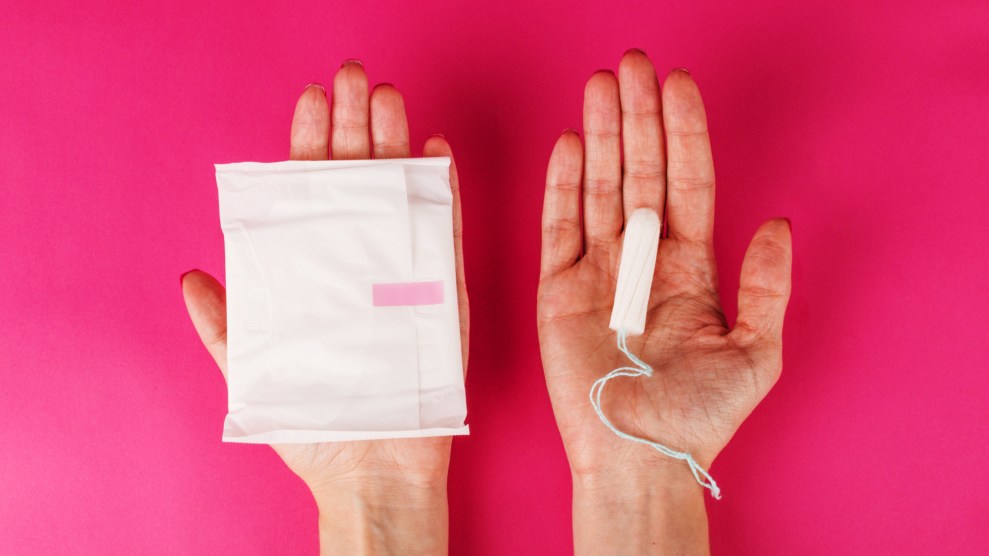 Getting your period in prison can be a kind of hell. Women are the fastest-growing incarcerated population, but in many states, prisons only offer cheap pads that don’t stick or absorb well. Female prisoners often have to fashion their own makeshift tampons out of bedding, clothes, toilet paper, or whatever else they can find. Some get sick from this: Last year, a woman in Maryland told lawmakers that she suffered toxic shock syndrome after using toilet paper as tampons in prison—she ended up needing an emergency hysterectomy.

88 percent of women reported leaking blood onto their clothes.

Women have been sharing horror stories about prison sanitary products for years. In September, a Missouri nonprofit finally decided to quantify just how bad the situation is for inmates in the state. Missouri Appleseed, working with the state Department of Corrections, surveyed 90 incarcerated women, 20 prison nurses, and 20 correctional case managers about their access to sanitary products. The findings were pretty shocking:

Better pads and tampons can be purchased in the commissary, a prison’s version of a corner store. But they’re often too expensive. According to a spokesperson from the Missouri Department of Corrections:

The situation is so grim that Missouri lawmakers are now considering a bill that would require prisons to offer free tampons and better-quality pads. “We are completely in favor of providing a wider range of free feminine protection products in our women’s facilities, including two types of pads with wings and two sizes of tampons. At this point, we just need to procure the funding to make it happen,” the spokesperson told Mother Jones. The department estimates it would cost about $171,000 to give free tampons in prisons, assuming that half of the state’s roughly 3,100 women inmates would request them. The department’s total budget is $786 million annually.

The push for better pads and tampons is happening across the country. In 2017, the Federal Bureau of Prisons issued a memo requiring wardens in federal facilities to provide these products for free. (The change at the federal level inspired Missouri Appleseed to launch its survey as a way to see how Missouri’s system stacked up.) Beyond that, Arizona, Maryland, Nebraska, Colorado, and New York are among states that have changed their policies in recent years to improve access. In Alabama, lawmakers are now considering a bill to do the same, after the Justice Department found in 2014 that inmates there were forced to have sex with guards to get their hands on these products. (A consent decree later required Alabama prisons to provide them for free, but a state senator recently said she’s received reports that women inmates are still not receiving them “in a timely manner.”)

But not all lawmakers are open to improving the quality of life for incarcerated women. In Maine, Republican state Rep. Richard Pickett last month argued against a state bill that would guarantee unrestricted access to pads and tampons in prisons there. He said incarcerated women already had adequate access. “Quite frankly, and I don’t mean this in any disrespect, the jail system and the correctional system was never meant to be a country club,” he added, according to Bangor Daily News reporter Alex Acquisto.

“Imagine you’re a person who has their period inside of a correctional facility,” countered Whitney Parrish of the Maine Women’s Lobby, according to the Maine Beacon. “When you run out, you’re out…You may have no money to go to commissary, and if you do, you may have to weigh that purchase against other necessities, like making phone calls to your children or attorney.”

“Menstrual products,” she added, “are not a luxury item by any means.”