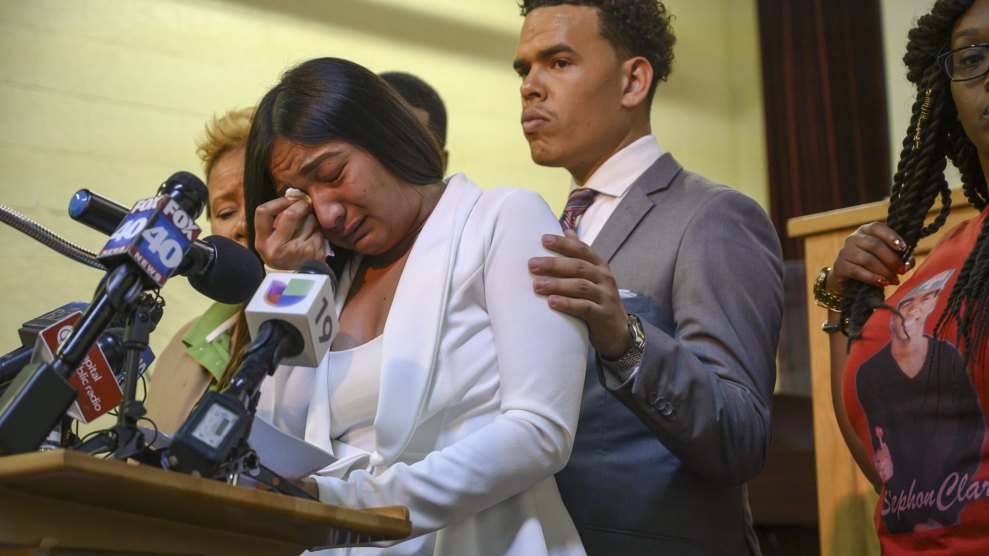 Selena Manni, fiancée of Stephon Clark, wipes tears as she reacts to the decision by District Attorney Anne Marie Schubert to not press charges on Saturday.Renee C. Byer/Sacramento Bee/Zuma

Update (3/5/2019): Hours after Attorney General Xavier Becerra announced his office would not file criminal charges in the Stephon Clark case, federal authorities announced they will investigate whether Sacramento police officers violated Clark’s civil rights when they shot and killed the 22-year-old last March. US Attorney McGregor Scott and Special Agent Sean Ragan, who oversees the FBI’s Sacramento field office, said in a joint statement the investigation will be conducted with the US Justice Department’s civil rights division.

On Tuesday, California Attorney General Xavier Becerra announced that the state has declined to seek criminal charges against Sacramento police officers involved in the death of Stephon Clark, a 22-year-old black man who was killed last March in his grandparents’ backyard while holding a cellphone.

“Our investigation has concluded that no criminal charges against the officers involved in the shooting can be sustained,” Becerra told reporters at a press conference.

Becerra said the state’s 11-month independent review of the 22-minute interaction between Clark and the Sacramento officers found that Clark committed “unlawful acts” by breaking car windows and a neighbor’s sliding glass door and that he did not “follow officers’ commands.” Beccera added that Clark had “an object in his hands”—the cellphone—that officers believed was a gun and that he “advanced significantly toward the officers” during the incident.

“Nothing can bring back Stephon Clark and nothing helps ends the pain that his family carries,” Becerra told reporters. He met with Clark’s mother ahead of the announcement.

On Saturday, after a review of footage from body cameras, helicopters, surveillance, and dashboard videos, Schubert concluded that Sacramento officers acted within their legal rights on the night Clark was killed. At the press conference, Schubert presented evidence that Clark was suicidal, claiming that two nights before the shooting, the mother of his children called 911 to report Clark for domestic violence.

Clark’s death last March inspired protests in Sacramento and prompted lawmakers to pursue legislation to restrict the use of lethal force. On Monday night, Sacramento police arrested 84 people who were protesting Schubert’s decision.