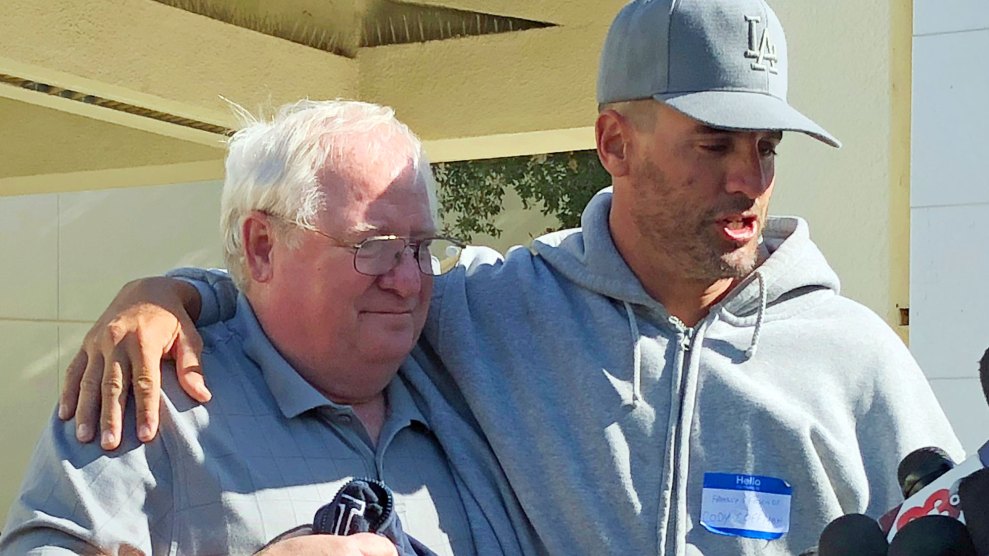 Jason Coffman, right, talks to the media about his son, Cody Coffman, who died in the shooting, and holds onto his father-in-law, Mike Johnston, in Thousand Oaks, California. Jonathan J. Cooper/AP

On Wednesday night, a gunman entered a country music bar in Thousand Oaks, California, where survivors of last year’s deadly mass shooting in Las Vegas often met, and killed 12 people, including a sheriff’s deputy. The shooter, a 28-year-old Marine Corps veteran, was found dead, and no motive has been uncovered.

Among the victims was Cody Hoffman. In a heart-wrenching moment with reporters on Thursday, Jason Coffman broke down as he delivered the news that his eldest son Cody was killed in the Borderline shooting. “The first thing I said was, ‘Please don’t drink and drive,'” Coffman told CNN. “The last thing I said was, ‘Son, I love you.'”

This is the real, raw, brutal effect of gun violence. Not a statistic, not a political campaign, but a parent losing their child.pic.twitter.com/leEDZywwUu

Another victim was Telemachus Orfanos, who survived the deadliest mass shooting in American history more than a year ago. His mother, Susan, didn’t want to hear the thoughts and prayers anymore but her message to reporters was clear. “He made it through Las Vegas, he came home. And he didn’t come home last night, and the two words I want you to write are: Gun control,” she told the New York Times.