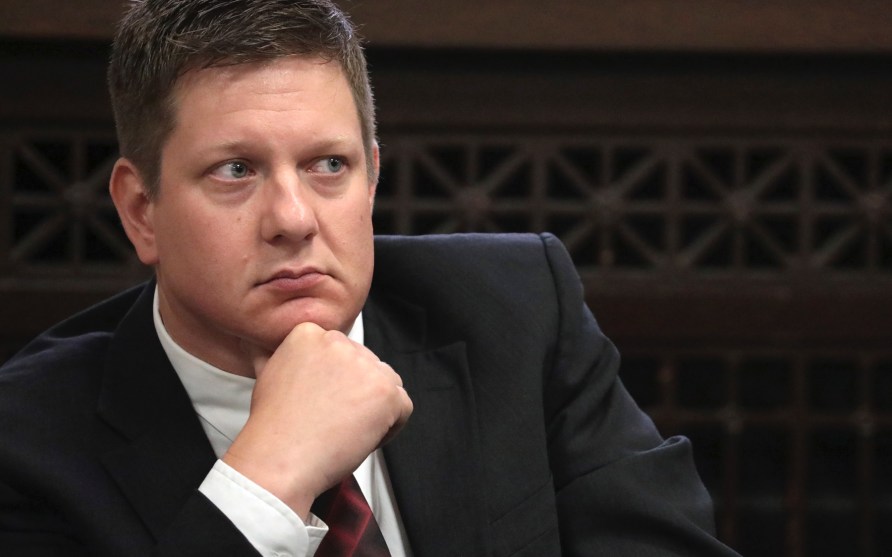 Chicago is 31 percent black, but you would never know it based on the jury selected Thursday for the murder trial of Jason Van Dyke, the white Chicago police officer who shot and killed black teenager Laquan McDonald in October 2014.

Over three days of jury selection, attorneys on both sides accused one another of excluding jurors based on race, a constitutional violation. Cook County Circuit Court Judge Vincent Gaughan ultimately ruled that neither side had demonstrated any clear bias in its decision-making. The breakdown of the final jury nonetheless skews disproportionately white—only one of the 12 jurors is black. Gaughan gave the defense until Friday to say whether it will opt for a bench trial instead of a jury trial. So far, the defense has given no indication it will.

Attorneys are given wide latitude in determining who sits on a jury. In a legal process known as voir dire, they question prospective jurors about their backgrounds and positions on issues that might affect a juror’s ability to be impartial. Lawyers on both sides can strike jurors “for cause” if they can make the case that the person cannot deliver a fair verdict. They are also allowed a limited number of “peremptory strikes,” which allows them to eliminate jurors without explanation. Thanks to a landmark 1986 Supreme Court case, however, it is illegal to dismiss potential jurors based on race or gender. If opposing counsel suspects a peremptory strike is motivated by bias, they can use a so-called Batson challenge to contest it—in which case, the attorney seeking to disqualify the juror must make their case to the court.

“Not every African American is going to vote the same in every case.”

During the Van Dyke jury selection, Gaughan, who has sought to keep a tight lid on the proceedings, led the questioning of jurors in his chambers with attorneys and some media present. He did not allow reporters to ask jurors about their ethnicities, so the media had to assess race based on appearance. The Chicago Sun-Times reported that the final jury of three men and nine women appears to include seven whites, three Hispanics (who also can be white), one Asian, and one African American. Chicago’s 2017 population was 49 percent white and 31 percent black, according to the US Census Bureau, which would mean whites are overrepresented on the jury and blacks are significantly underrepresented.

If there were no racial bias, why aren’t more blacks on the jury? It’s a fair question and a tough one to answer. Without looking at much larger sample sizes, and barring any overtly racist behavior by one side or the other, it’s difficult to prove that bias is a factor in any given jury selection.

But that didn’t prevent attorneys on both sides from pointing fingers. On Wednesday, Van Dyke’s prosecutors objected when his defenders tried to strike a black woman for cause. The woman, a middle-aged FedEx driver, had said during questioning that she had seen a video of the McDonald shooting and thought it was “horrific.” She couldn’t say for certain that the officer was guilty, she added, but “I had an opinion about how many times the shots went off.”

Prosecutors claimed the defenders were trying to exclude the woman because she was black—the defense already had struck two black jurors on Monday, according to the Chicago Tribune. Gaughan denied the motion, saying the defense had offered “race-neutral explanations” for the previous strikes. Still, he kept the woman on the jury, and the defense declined to use a peremptory strike against her, so she was seated.

“I’m not kicking him off because he’s black. I have a right to say ‘I don’t want him to be on my jury.'”

Also on Wednesday, prosecutors issued a Batson challenge when the defense tried to strike a 22-year-old black man. The man, who had submitted an incomplete jury questionnaire, said he’d seen Facebook posts claiming Van Dyke had “murdered” McDonald, but he had not seen the video. Gaughan denied the challenge. “I’m not kicking him off because he’s black. I have a right to say, ‘I don’t want him to be on my jury,'” said Randy Rueckert, an attorney for Van Dyke. “This case isn’t about black and white. The press has made it about black and white, for gosh sake.”

The defense, meanwhile, twice accused prosecutors—who reportedly used four of their five peremptory strikes to get rid of white men—of trying to eliminate white men from the jury. Gaughan rejected those motions, too.

In fact, lawyers’ decisions in jury selection likely are about race, at least in part, says Rory Little, a professor at the University of California Hastings College of the Law who has worked both as a federal prosecutor and as a criminal defense attorney.

Extensive research shows “that people are sympathetic to people like them,” he says. “So if you’re a defense attorney, you try to pick jurors that are like your client—whatever that means. If you’re the government, you want to pick jurors that are different than the defendant.” That could include a consideration of race, along with gender, age, religion, economic status, or other characteristics. Still, “within groups you have people who don’t like certain things. Not every African American is going to vote the same in every case.” A black person who used to work in law enforcement, for example, may be sympathetic to the police.

In the end, “when we select these juries, we don’t know so much about the juror, and so we make decisions based on stereotypes,” Little adds—especially in a case as racially charged as a police shooting. Research also shows that black Americans tend to view the police less favorably than white Americans: “I think it’s naive to think that lawyers and people aren’t thinking about race in a case like this.”

Perhaps that explains the results of a HuffPost investigation, which looked at 13 trials involving 14 police officers (12 white, 1 Hispanic, 1 Asian) charged in on-duty shootings from August 2014 to December 2016, and found that 11 were decided by majority-white juries. Eight of the trials resulted in acquittals or mistrials—only five juries found an officer criminally liable.

In a prior case, a judge ruled that one of Van Dyke’s lawyers had sought to strike a juror based on race.

Racial bias may be hard to prove, but in a previous, unrelated case, according to the Tribune, a judge ruled that one of Van Dyke’s lawyers, Daniel Herbert, had sought to exclude a potential juror because they were black. (Herbert was defending a police officer in that case, too.) The judge reportedly remarked that it was suspicious Herbert had asked for time to respond to the prosecutors’ Batson challenge because, if he had a valid reason for striking the black juror, he should have been able to articulate it immediately. Herbert had claimed he needed time to “cool off” in the bathroom because he was “angry” he’d been accused by prosecutors.

The judge was unmoved. According to the Tribune, he noted that Herbert’s first four peremptory strikes aimed to dismiss the only four black people remaining in the jury pool. The juror Herbert initially sought to strike was reinstated—and the accused cop was convicted on all counts.