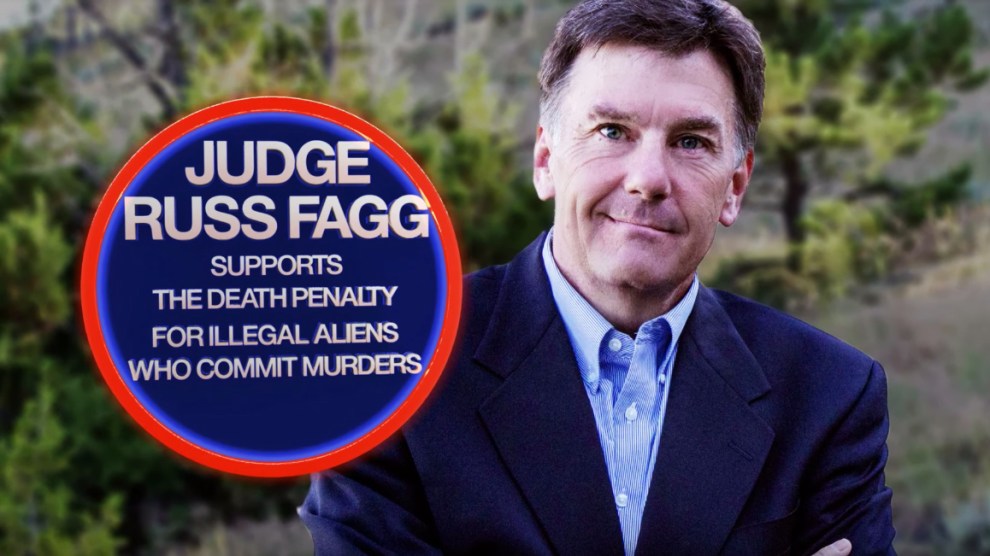 Montana hasn’t executed anyone in more a decade, and it’s unlikely to carry out a death sentence anytime soon. But you wouldn’t know that from watching the state’s US Senate race. In the hotly contested primary to take on incumbent Democratic Sen. Jon Tester, one Republican candidate—former Judge Russ Fagg—has decided to make capital punishment a cornerstone of his campaign.

“The death penalty in this case is being used as a vehicle to talk about one of the biggest issues to Republican primary voters.”

Using television ads, media appearances, and campaign events, Fagg has hammered state Auditor Matt Rosendale, the presumed GOP frontrunner, over Rosendale’s opposition to capital punishment. In 2013, Rosendale, who is Catholic, co-authored an op-ed calling to end Montana’s death penalty. “Those who support the death penalty usually use the same, tired arguments: It saves money. It deters crime. Everyone who gets the death penalty is guilty and deserves to die,” he wrote. “We’re here to say those arguments are wrong, wrong and wrong.” (Rosendale is correct. States without the death penalty have lower murder rates than states that do carry out executions, and a number of former death row inmates have been exonerated.)

Rosendale’s views have become more popular in recent years, as even some GOP officials have joined Democrats in calling for criminal justice reform. Last fall, support for the death penalty fell to a 45-year low, with 55 percent of respondents nationwide telling Gallup they favored it. (Death penalty support peaked at 80 percent in 1994.) In 1999, the United States executed 98 people. By 2017, that number had fallen to 23.

But among rank-and-file Republican voters, support for the death penalty remains strong—and Fagg has sought to exploit that fact by linking it to another powerful wedge issue: immigration.

“This has every bit to do with immigration,” says Erik Iverson, the former chair of the Montana Republican Party. “The death penalty in this case is being used as a vehicle to talk about one of the biggest issues to Republican primary voters.”

Unauthorized immigration is nearly non-existent in Montana. According to the American Immigration Council, in 2014 there were fewer than 5,000 undocumented immigrants there. But in a state Trump won by 20 points, each GOP candidate is trying to align himself with the president. Immigration is a topic that gets voters to listen. Trump has frequently portrayed undocumented immigrants as a threat, highlighting crimes committed by migrants and demanding tougher enforcement measures. Trump is also an outspoken proponent of capital punishment. He has repeatedly called for the death penalty for drug dealers and individuals who kill police officers. Following the 1989 rape of a woman in New York’s Central Park, Trump took out full-page newspaper ads calling for the reinstatement of the death penalty.

The Montana GOP primary, which will take place on Tuesday, is a four-way contest between Fagg, Rosendale, businessman Troy Downing, and state Sen. Al Olszewski. Rosendale is widely considered the favorite, and many Republicans see him as their strongest candidate against Tester. Outside conservative groups have already spent more than $1 million supporting Rosendale, and he’s secured endorsements from high-profile Republicans, including Sens. Ted Cruz (Texas), Mike Lee (Utah), and Rand Paul (Ky.) .

Fagg’s ads are an attempt to hurt Rosendale’s appeal with the state’s GOP base. The idea, Iverson believes, is to convince voters that if Rosendale is “soft on the death penalty, he’s going to be soft on immigrants who commit violent crimes.”

The Club for Growth, an independent conservative group supporting Rosendale, has hit back at Fagg, criticizing his judicial record and calling him “soft on crime” and “lenient on criminals.” For his part, Rosendale is also running an anti-immigration campaign—just without the death penalty component. “Liberals from California to Washington are fighting President Trump on illegal immigration,” he says in one recent ad. “I’ll stand with President Trump. We’ll get tough, and we’ll build that wall.”

Using capital punishment as a pillar of a 2018 campaign is a surprising move. Since 1976, Montana has executed just three people; none were immigrants. The last person to be executed in the state was convicted murderer David Dawson, who was put to death in 2006. There are currently two people on the state’s death row; one of them is a Canadian who killed two men while visiting Montana. They are unlikely to be executed any time soon—like most states that allow capital punishment, Montana is facing a shortage of drugs used for lethal injection.

Over the past several years, an increasing number of pharmaceutical manufacturers and wholesalers have refused to sell execution drugs to prisons. This has left states scrambling for viable alternatives. In its previous executions, Montana used sodium pentothal, a barbituate that can no longer be purchased in the United States. In 2015, a federal judge ruled that Montana’s proposed replacement drug wasn’t acceptable, effectively placing a moratorium on executions in the state.

Fagg’s campaign says that he will use his “expertise as a district court judge for 22 years” to help state lawmakers craft a new execution protocol. “The Montana Legislature has full authority to modify Montana law to allow flexibility in which drugs we use to perform lethal injection,” said Karli Hill, a Fagg spokesperson, in an email.

It’s unclear how Fagg would use his role as a US senator to shape state legislation in Montana. Moreover, specifically targeting undocumented immigrants for execution could raise serious constitutional issues. “Subjecting a person to the death penalty because of who they are is unconstitutional,” said Robert Dunham, executive director of the Death Penalty Information Center, in an email. “It is even more clearly unconstitutional when racial stereotyping is involved. There is no evidence that undocumented immigrants are more violence-prone than others—the data indicates they may actually commit fewer violent offenses.”

Asked about the constitutional objections, Hill told Mother Jones, “We…agree that merely being in the country illegally isn’t grounds for the death penalty in and of itself in cases of murder. Russ supports the death penalty when appropriate, unlike Matt Rosendale who doesn’t support it at all.”

Despite the fact that Montana is unlikely to execute undocumented immigrants in the near future, some observers think Fagg’s message could resonate. “Death penalty and law and order?” Iverson says. “Those are always going to be good issues for Republican primary voters.”