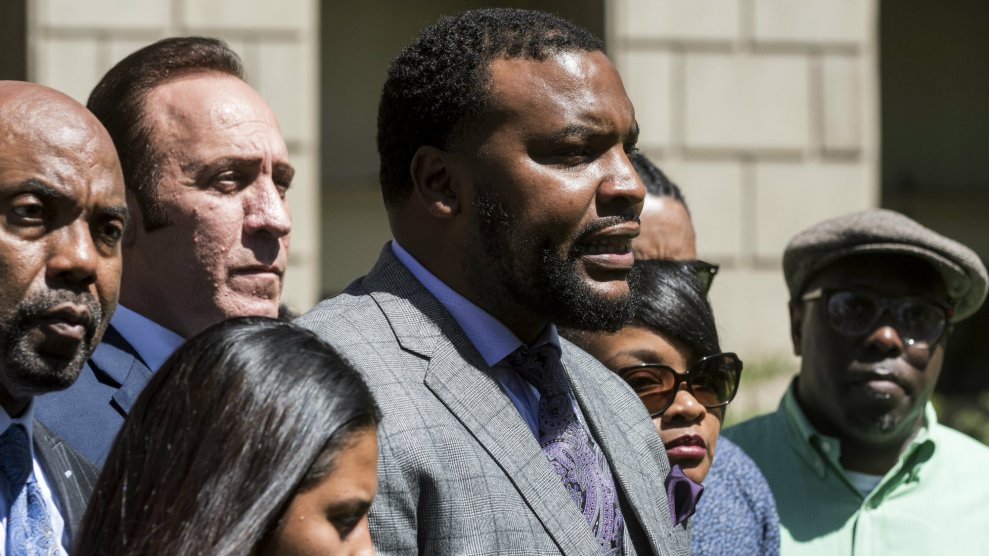 Relatives of Diante Yarber appear with their attorney at a press conference on April 23, 2018.James Quigg

One of the officers involved in the April 5 shooting death of an unarmed black man in a Walmart parking lot in Barstow, California, was previously charged with an off-duty hate crime, fired from the police force, and later reinstated, according to information from news reports, police statements, and claims by an attorney for the family of the 26-year-old shooting victim, Diante Yarber.

In the earlier incident, a white Barstow officer named Jimmy Alfred Walker, then 30, was charged with one misdemeanor count of violating a man’s civil rights, two counts of battery, and one count of disturbing the peace following an August 2010 off-duty fracas in which Walker allegedly assaulted a man and a woman outside a bar, the Los Angeles Times reported: “After deputies arrived and in their presence, he then allegedly directed racial epithets toward the man.” The race of the victims was unavailable at the time, the Times noted, but Walker was charged under a hate crime statute that makes it illegal to use force against another person because of their race or other immutable characteristics.

A local news website, the San Bernadino County Sentinel, reported that Walker was fired in 2013 “as a delayed consequence of an August 2010 incident” and that he had ultimately pleaded guilty to lesser charges of fighting in public and public intoxication, and had received probation. The Sentinel, which added that the allegedly assaulted couple were African American, also reported that Walker eventually filed a successful motion to have all charges dismissed and that an administrative judge, in an arbitration hearing, determined that Walker’s conduct, being off-duty and outside Barstow, did not warrant losing his badge—Walker was reinstated with two years’ back pay. (Attempts to reach Officer Walker were unsuccessful.)

The Yarber family’s attorney, Lee Merritt held a press conference last week saying his sources had identified one of the officers who responded to the fatal call as Jimmy (or Jimmie) Alfred Walker. On Monday, the Barstow Police Department finally confirmed Walker’s involvement but said state law prevented the release of any details from his personnel file. The other officers on the scene were Jose Barrientos, Vincent Carrillo, and Mathew Helms, the department said. According to news reports, Merritt cited witness accounts saying one of the officers had shouted a racial slur—”(Expletive) we’re gonna kill you”—at Yarber and his passengers. The police department did not comment on that claim.

Yarber was killed early last month after police fired 30 shots at his car, which had at least two passengers inside. Officers had responded to a call about a “suspicious” vehicle parked in a Walmart lot. According to reports, the license plate number given to the police indicated that the car was registered to Yarber, whom police suspected of involvement in a stolen-car incident the month before. When they tried to detain him, police said, Yarber twice put the car in reverse and backed toward the officers, striking two cruisers. A cellphone video of part of the incident shows Yarber’s car backing out of a parking space, apparently trying to get away, as officers appear to fire on the vehicle.

An independent autopsy commissioned by Yarber’s family determined that he was struck 10 times. His cause of death was asphyxiation—he choked on his own blood, Merritt told reporters, and his life might have been saved had officers rendered prompt medical attention. The family intends to sue the city, he said.

An August 2017 investigation by the Washington Post found that of nearly 1,900 officers fired from major police departments for misconduct since 2006, nearly a quarter of them got their jobs back after going through arbitration. “It’s demoralizing, but not just to the chief,” former Philadelphia police chief Charles Ramsey told the newspaper. “It’s demoralizing to the rank and file who really don’t want to have those kinds of people in their ranks.”

“It causes a tremendous amount of anxiety in the public,” he added. “Our credibility is shot whenever these things happen.”