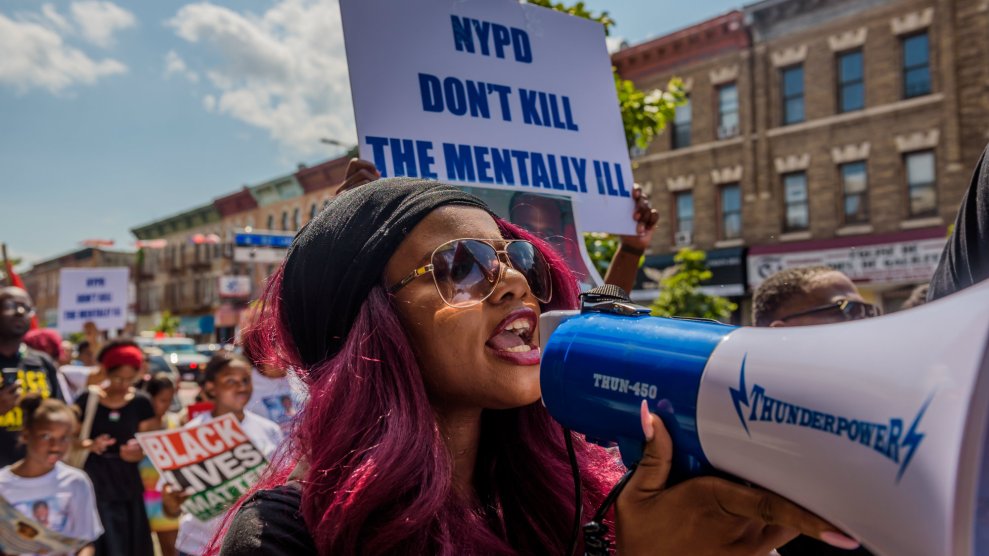 New York City police officers shot and killed an unarmed African-American man Wednesday afternoon after responding to calls about a man pointing at passersby what bystanders believed to be a gun. The man was actually holding a metal pipe, police officials later determined. Saheed Vassell, 34, was a father of two and had bipolar disorder, his father told the New York Times.

Five police officers responded to the call about Vassell at an intersection in Brooklyn on Wednesday, NYPD chief Terence Monahan said at a press conference. Four of the officers fired a combined 10 shots at Vassell after he “took a two-handed shooting stance and pointed an object at the approaching officers,” Monahan said. After the shooting, officers determined that Vassell was not holding a gun but instead was holding a metal pipe “with some sort of knob at the end,” he added. The New York Attorney General’s office has launched an investigation into the shooting.

Vassell’s father told the Times that his son had refused treatment or medication for his bipolar disorder. Community members in the neighborhood where Vassell was shot told the Times and the New York Daily News that Vassell and his mental health challenges were well known. “All he did was just walk around the neighborhood,” one person told the Daily News. “He speaks to himself, usually he has an orange Bible or a rosary in his hand. He never had a problem with anyone.”

People with untreated mental health challenges are at least 16 times more likely to be killed by law enforcement than other civilians, according to the Treatment Advocacy Center. A Washington Post analysis of officer-involved killings in 2017 determined that about a quarter of the nearly 1,000 people killed by police last year had some kind of mental health issue.

While one witness to Vassell’s shooting told the Times that he heard an officer and Vassell exchange words before the shooting, other witnesses told the Times and the Daily News that they did not hear the officers give any warnings or commands to Vassell and that they began firing almost immediately after exiting their vehicles.

Vassell’s shooting drew a crowd of protesters almost immediately after the incident occurred. At least one protest and a separate vigil have been scheduled in New York City on Thursday. The shooting comes less than three weeks after the fatal police shooting of another unarmed black man, Stephon Clark, in Sacramento. That shooting has drawn national media attention and sparked weeks of protests in California’s capital.