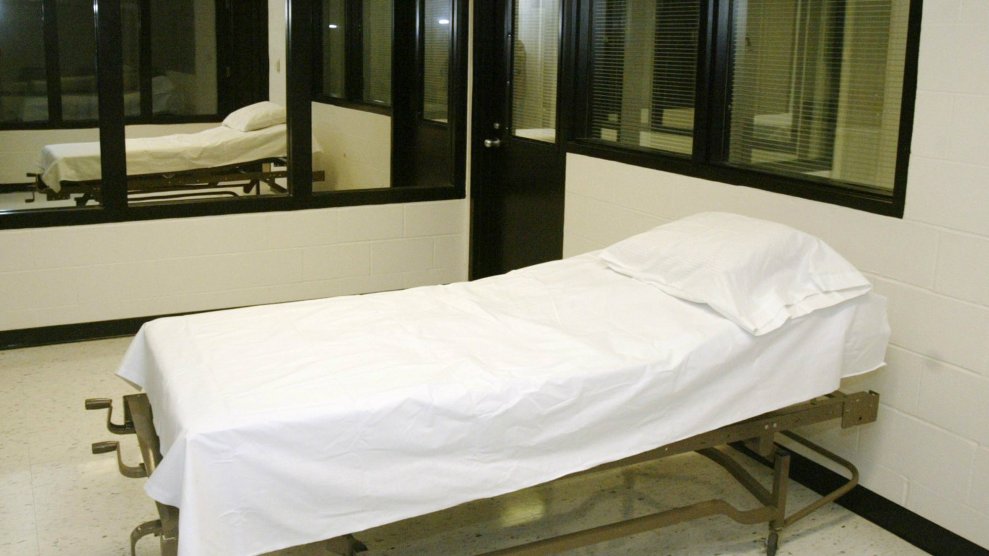 Missouri death row inmate Russell Bucklew is scheduled to die on Tuesday. But Bucklew suffers from a rare medical condition, and his lawyers say the execution drug that will be used could come with gruesome consequences and constitute cruel and unusual punishment.

For nearly all his life, Bucklew has been afflicted with cavernous hemangioma, a rare disease that causes tumors to form in his face, head, neck, and throat. Prison staff intend to use pentobarbital, a sedative, to execute him, but this could cause his tumors to burst. Cheryl Pilate, one of Bucklew’s lawyers told the Associated Press on Monday, he would likely experience “a gruesome execution with choking and gagging on blood and the infliction of excruciating pain.”

Bucklew, who is 49 years old, has been on death row for more than 20 years for the 1996 murder of Michael Sanders in Cape Giradeau, Missouri. Sanders was the new boyfriend of Bucklew’s former girlfriend Stephanie Ray. Bucklew shot Sanders in front of his children, Ray, and her children and then kidnapped Ray and took her to a secluded area. After raping her, he drove her to the St. Louis area as a hostage where a high-speed chase and shootout with a state trooper ensued. Bucklew was arrested and held in the Cape Girardeau County jail but escaped a few months later in June by hiding in a trash can that was taken out of the prison. While on the run, he went to the home of Ray’s mother and attacked her with a hammer, but she survived. Two days later, Bucklew was apprehended and jailed. In 1997, he was convicted of kidnap, rape, and murder, and sentenced to death.

Missouri first attempted to execute Bucklew in May 2014, but the US Supreme Court granted a stay in order to allow Bucklew’s claims that his execution would be painful to work its way through the lower courts. Bucklew’s lawyers argued that given his illness, he could not be humanely executed, and this cruel and unusual punishment would be a violation of the Eighth Amendment. In Glossip v. Gross, the US Supreme Court said that when the Eighth Amendment is used to challenge a method of execution a “reasonable alternative” must be proposed by the inmate.

In the 2014 appeal, Bucklew’s lawyers suggested that the state use nitrogen gas to execute him. (The state of Oklahoma recently proposed it as an alternative to lethal injection.) According to court documents, Dr. Joel Zivot, a professor of surgery and anesthesiology at Emory University said that “substantial risk” exists that Bucklew will “suffer from extreme or excruciating pain.” But last June, a federal judge ruled that because Bucklew could not actually show that death by nitrogen would reduce the risk of suffering, his execution should proceed.

Missouri uses a one-drug protocol in its executions in which death row inmates are injected with a large dose of the sedative pentobarbital. According to a Buzzfeed News report, the state’s drug supplier is a pharmacy with a history of selling contaminated drugs, and anti-death penalty advocates argue that contaminated pentobarbital would also cause a painful death for Bucklew.

Last week, in the appeal Bucklew’s lawyers filed with the US Supreme Court, they asked for the court to spare his life and painted a grim picture of what could happen during the execution. “As he struggles to breathe through the execution procedure,” they wrote, “Bucklew’s throat tumor will likely rupture…filling his mouth and airway with blood, causing him to choke and cough on his own blood.”