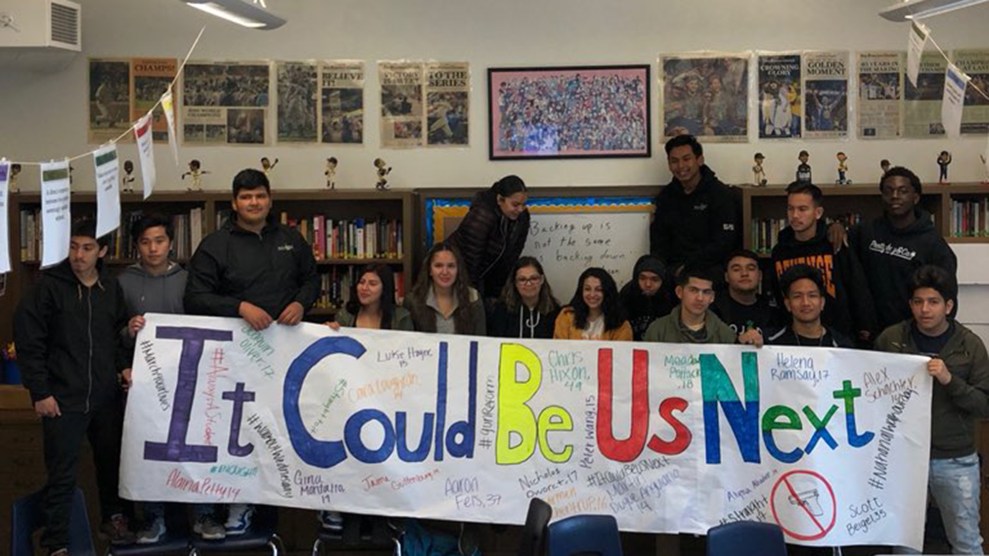 Students at San Leandro High prior to the lockdown.Julian Lucero via Twitter

Students at California’s San Leandro High School planned to be among the thousands of students who walked out of class on Wednesday to honor the 17 people killed at Florida’s Marjory Stoneman Douglas High School and to rally for stricter gun laws. Instead, they found themselves facing the surreal possibility of a shooter on their own campus. A threat scrawled on the wall of a bathroom stall triggered a nearly three-hour lockdown. “It was crazy. We spent a week in class talking about it. Understanding it. Trying to come up with solutions and feeling bad about other schools who have to go through it,” says Jordan Cobbs, a junior at the school. “Then all of a sudden something close to that happened at our school. And we’re just in disbelief.”

Parents getting texts at San Leandro HS of threat to shoot students at 1:00. Lockdown #abc7news pic.twitter.com/clo7bgTIbM

San Leandro High deemed safe after shooting threat found in bathroom, per @SanLeandroPD. No guns or anything suspicious found. Students will be dismissed at 1p and no school tmw. No other schools affected. @KTVU pic.twitter.com/P3uzdH3SIk

Across the country, schools have been grappling with how to prepare for and respond to the threat of an active shooter on campus. But some are also dealing with the disruption and panic caused by copycat incidents and thoughtless student pranks. Law enforcement authorities did not offer an opinion on whether the San Leandro incident was a prank or a serious threat. Either way, it was a nightmare for the students. One pupil told local news station ABC 7 that students locked in her classroom were “peeing in buckets.” A middle school in the same district was also placed on lockdown Wednesday after a “copycat” incident on campus, the district’s superintendent told another local news station—he didn’t offer further details, except to say the situation had been resolved.

Julian Lucero, a sophomore at San Leandro High, told me he was in English class just before 10 a.m. when the school’s principal announced over the intercom that the school was going into lockdown. Many of Lucero’s classmates had just finished making signs and were getting ready to leave the building for the #NationalWalkOutDay demonstration.

This was us only 5 minuets before the lockdown happened at San Leandro high school, we wanted our voices to be heard for the nation wide walk our walk at 10, such irony is sad pic.twitter.com/EQ6orDI5f3

Lucero’s teacher then turned off the classroom lights and shut the blinds, Lucero said. The students scattered into corners of the classroom, away from the windows and door. Student Mia Corpuz was also in that classroom.

i have never been so scared in my life. i was trembling, crying, and having panic attacks in a corner of a classroom. all because someone decided to write a stupid threat on a bathroom stall. i didnt know and i still dont know if whatever happened today was a joke or not.

BECAUSE THERE IS NO WAY OF TELLING WHAT WILL HAPPEN! we need stricter gun laws because if this situation was real a student couldve walked onto campus with a gun. and we would not be prepared.

“I was thinking about whether I would see my family [again]. So many thoughts were in my mind and it was very overwhelming,” she told me on Friday. “I’ve heard and watched so many things on the news about school shootings and I didn’t want to believe I was going to be in one.”

Bobby Kouropoulos, a sophomore, was in geometry in a building across the street from the school’s main campus when the lockdown was announced. He found out what was happening on the main campus, where the police presence was heaviest, through Snapchat and group texts, he said. At one point, a rumor began to circulate that two guns had been found on the main campus—police confirmed later that this was false. But during the lockdown “that changed everything,” Kouropoulos said. “In the beginning I was like, ‘Well, it’s just a lockdown. We’ll just be quiet, go on our phones, do our homework.'” But once the gun rumor started to spread, “I felt scared. I felt kind of worked up.”

San Leandro High students still made sure their voices were heard on Wednesday. After the lockdown was lifted, several dozen gathered outside the main entrance for an anti-gun-violence demonstration. School was cancelled on Thursday, and while classes resumed on Friday many students stayed home. Lucero said several of his classes were half empty, and the street where the school’s more than 2,000 students cross from one campus to another was unusually quiet. “There were maybe 100 kids walking across the street earlier,” Kouropoulos said. Normally, “it’s like walking through New York.”

“Over social media a lot of students I know said they feel worried, they feel scared for themselves, and they don’t feel safe knowing that the person could still be at large, and so many people didn’t go to school because of that,” Lucero said.

“I don’t think that’s fair,” he added. “They should be able to go to school and everywhere else and be able to feel safe.”