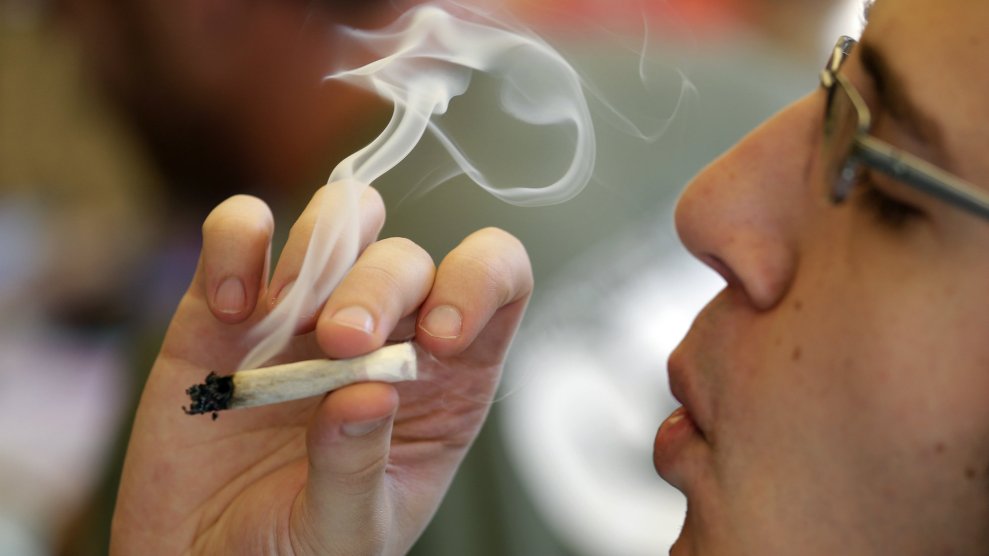 Philadelphia’s district attorney Larry Krasner last week made public a headline-grabbing memo aimed at reducing both the number of people in city jail and prisons and the lengths of their stays. In one key change, Krasner’s memo lays out a broad policy, initially announced in February, of non-enforcement for marijuana possession—directing assistant DAs to not charge defendants with a crime regardless of the weight of marijuana carried, or even with any offense related to the purchase of marijuana or possession of marijuana paraphernalia. In February, Krasner also dropped several dozen open marijuana possession cases en masse.

The new policy, experts tell Mother Jones, effectively de-criminalizes pot possession in Philadelphia—and also could serve as a model for how reform-minded district attorneys across the country can take marijuana reform into their own hands.

Eight states and the District of Columbia have legalized the recreational use of marijuana, while several states are considering laws that would legalize personal use in 2018. In February, Vermont became the first state to legalize marijuana for personal use through its legislature rather than via ballot initiative. But policies at DA’s offices like the one implemented by Krasner could essentially achieve at least one of legalization’s intended ends—ensuring that otherwise law-abiding people aren’t sent to jail over a bag of weed.

Marijuana possession had already largely been responded to with a ticket, resulting in a fine, by Philadelphia police since a 2014 law allowed officers to begin issuing citations to people caught with pot instead of arresting them. Krasner’s new policy means his office will no longer move forward with possession cases that result in arrest. It’s unclear what the policy means for cases where tickets are issued.

“It’s a matter of prosecutorial discretion,” says David Sklansky, an expert on prosecutorial powers at Stanford Law School. “At least as long as it’s in place, [Krasner’s policy] effectively does most of what a state law de-criminalizing marijuana possession would do.”

Krasner’s office isn’t the first to move away from prosecuting certain marijuana possession cases, particularly in small amounts. For instance, Harris County, Texas, DA Kim Ogg, elected on a reform platform in 2016, announced early last year that her office would stop charging marijuana possession cases involving less than four ounces. And in 2014, Brooklyn DA Ken Thompson announced that his office would stop charging adults with low-level marijuana offenses if they have limited or no criminal record. Like Ogg and Thompson, Krasner isn’t prosecuting crimes “he feels are a waste of his time and resources,” says Ben Gershman, a law professor at Pace University. “From a law enforcement standpoint, that makes a lot of sense.”

Both Ogg and Krasner are part of a new wave of prosecutors elected since the start of the Black Lives Matter movement on progressive criminal justice platforms that reject the tough-on-crime philosophy that has driven mass incarceration. A new focus on the nation’s approximately 2,400 district attorneys—arguably the most influential actors within the criminal justice system—has seen many incumbent DAs, who have frequently run unopposed in the past, facing electoral challenges from opponents with fresh ideas about crime and punishment. In some instances, DAs’ stances on marijuana have become a campaign issue. In California, for example, the ACLU’s Northern California branch is pushing an educational campaign highlighting that none of the state’s incumbent DAs supported the 2016 ballot initiative that legalized the recreational use of marijuana, which nearly 60 percent of voters supported. And Arisha Hatch, director of campaigns the Color of Change Political Action Committee, told me her organization is looking to support candidates nationally who pledge to decline to charge certain low level offenses, including marijuana charges.

Other district attorneys that might follow Krasner’s lead could rattle state politicians still set on bringing the hammer down on even the most minor of criminal offenders. But, even still, it’s unclear if they’d be able to do much about it. A state’s governor or attorney general who was opposed to the decision could in theory have the power to override any moves by the DA, but, as Sklansky notes, it depends on the laws of the state. Florida, for instance, saw a case last year in which the governor booted a state attorney from all the capital cases in her jurisdiction after she refused to pursue the death penalty under any circumstance. She sued, but lost after the courts ruled the governor had discretion over her decisions. “If a similar issue happened with regard to a refusal to take marijuana cases in some other state, it would be litigated under the law of that particular state,” Sklanksy notes.

Then there’s the federal government, specifically Trump’s tough-on-crime Department of Justice and anti-pot crusading Attorney General Jeff Sessions. As marijuana remains illegal under federal law, the DOJ could in theory direct federal prosecutors to charge marijuana possession cases in jurisdictions where local DAs fails to do so. It’s unlikely federal law enforcement would go that route, though, Sklansky told me: “It seems to me a colossal waste of the resources of the Department of Justice.”

“Would they withhold funding for criminal justice programs from the city if there is federal funding? I suppose they could in the same way that we’re fighting this big debate over sanctuary cities,” Gershman adds.

But just because district attorneys have the authority to not pursue marijuana cases doesn’t mean it will always be easy to do so politically. “If everybody in your district wants marijuana to be prosecuted and you say you’re not going to prosecute it, you may lose your election,” says Sklansky. “But I think that there are probably many jurisdictions where the electorate would be fine with the decision.”