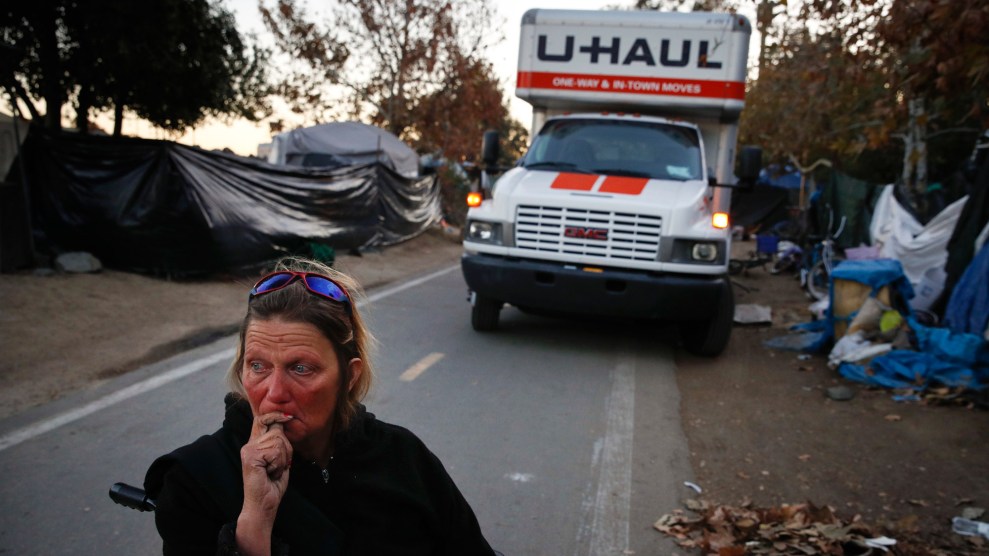 Denise Lindstrom, a 49-year-old homeless woman, sits in a wheelchair in front of a moving truck in an homeless encampment on the Santa Ana River trail in Anaheim, Calif.Jae C. Hong/AP

A federal judge in California is fed up with how officials in affluent Orange County treat homeless people, and on Tuesday he demanded that they work to find shelter for dozens living in encampments along the Santa Ana River.

“I’m tired of the paperwork and the ‘we can’t get it done’ nonsense,” District Court Judge David Carter told attorneys in a lawsuit filed by a group of homeless people and a local anti-poverty nonprofit against the county and several cities. “I’m looking for solutions.”

“I’m tired of the paperwork and the ‘we can’t get it done’ nonsense. I’m looking for solutions.”

The suit aimed to prevent Orange County and the cities of Anaheim, Costa Mesa, and Orange from clearing the camps. Carter told lawyers for both sides on Tuesday that he wanted county officials to devise an alternative plan for temporarily housing those people living there with the hopes that it could turn into a more permanent solution. That evening they reached a verbal agreement that would let the county eliminate the riverside homeless encampment by next week.

Under the proposed agreement, the county would start dismantling the homeless camps on February 20 and will offer vouchers for 400 motel rooms for those living along the river for up to 30 days. It would also open another 360 shelter beds in parking lots and a women’s shelter. That will temporarily house the somewhere between 400 and 1,000 homeless people that live along the two-mile stretch along the river.

The judge’s order came just weeks after attorneys for seven homeless people and the Orange County Catholic Worker, a nonprofit that provides assistance to the poor, filed a lawsuit against the county, as well as the cities of Anaheim, Costa Mesa, and Orange, to prevent officials from clearing the camps. The suit argued that the municipalities violated homeless people’s constitutional rights by pushing them into outlying areas without offering enough shelter and housing and enforcing anti-camping ordinances.

Orange County’s homeless population has surged over the past year, mirroring a rise in homelessness across California.

In late January, Orange County officials began evicting homeless people from a homeless camp along the river after officials received complaints from residents. But in a county with nearly 5,000 people experiencing homelessness, Orange County officials created 525 shelter beds last year, with another 100 more expected to come in 2018, the Los Angeles Times reported. Eve Garrow, a homelessness policy analyst for the ACLU of Southern California, told the Times that there was an estimated one shelter bed for every two homeless people in the area. The county’s homeless population has surged over the past year, with more than half of homeless people unsheltered. It mirrors a troubling rise in homelessness across California, thanks to insufficient affordable housing and skyrocketing rents.

On February 7, Carter granted a temporary restraining order against Orange County officials that prevented sheriff deputies from arresting homeless people who didn’t want to leave the encampments along the Santa Ana River.

The Orange County case is just the latest in which cities have reckoned with challenges to its laws governing homelessness—and have led to plans to create shelters. Just miles away in Pomona, California, a legal settlement in 2016 over the city’s confiscation of property prompted city officials to build lockers for homeless people and prevented the city from enforcing its anti-camping ordinance until there were enough shelter beds for every homeless resident. The city then approved a plan to create a temporary shelter with 175 beds. On Wednesday, Carter visited the homeless encampment for the fifth time, telling the Times the county’s clearing should be done “humanely and with dignity.”