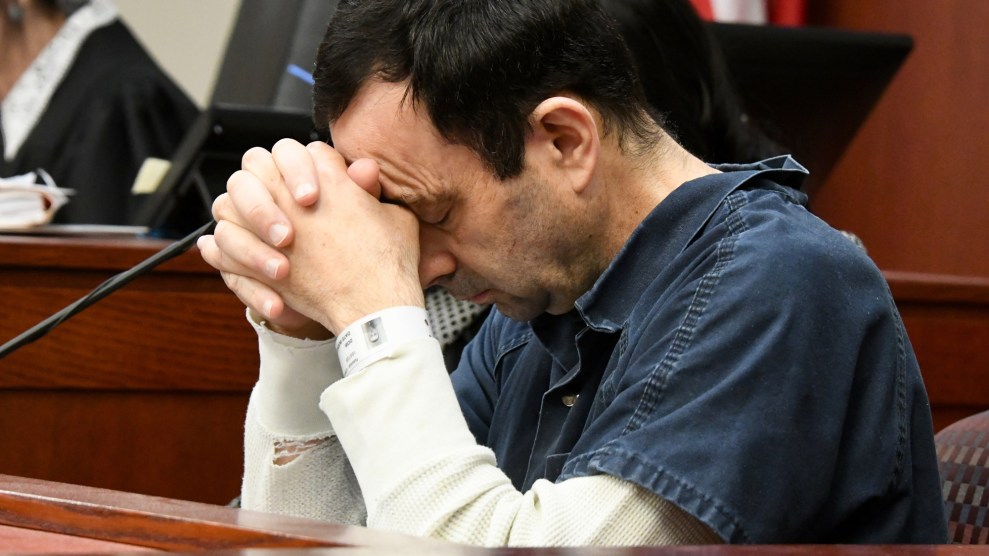 In a Michigan courtroom earlier this week, Larry Nassar covered his eyes with his hands as, one by one, the women and girls he allegedly abused came forward to detail how his actions—and the inaction of the institutions he worked for—changed their lives.

Three months ago, Nassar, a team doctor for USA Gymnastics for nearly 30 years and for Michigan State University, pled guilty to 10 counts of sexual assault. And on Tuesday, his sentencing hearing began with anguishing testimony from 29 women. Another 21 gave testimony on Wednesday, and nearly 100 victims will offer testimony by the end of hearing on Friday, either through written statements or in person in court. All told, more than 150 women, including several high-profile Olympic gymnasts, have accused the 54-year-old doctor of sexual abuse over decades.

Nassar also pleaded guilty to child pornography charges last July and he has already been sentenced to 60 years in federal prison on those charges. On the abuse charges, Michigan’s state attorney’s office is seeking an additional 125 years for every woman who filed police reports against Nassar, 125 in total.

The week has been full of testimony with details that are horrifying, but the women’s words also have been in many ways inspiring. In anticipation of the final sentencing, which is expected on Friday, we’ve collected some of the most powerful and most damning parts of the testimony (thanks to the Lansing State Journal, Michigan Radio, WILX-TV, MLive for their coverage of the hearing):

Kyle Stephens, a former gymnast whose family was friends with Nassar said she was molested by the doctor at his home when she visited with her parents. She was the first victim to testify this week: “Little girls don’t stay little forever. They grow into strong women that return to destroy your world.”

Olivia Cowan, a former patient: “Even in the situations you feel most safe, you can never let your guard down. If you can’t trust a world-renowned doctor, who in this world can you trust?…I want MSU and USAG to know that what they have done is on the very same level of accountability as the crime Nassar has committed…MSU knew what was happening to these athletes and decided to turn a blind eye to keep their reputation strong and their pockets full. If they would’ve only taken action from the first reporting, they would’ve saved me and all of these other women standing before us today from an aftermath full of pain and agony.”

“‘Mom, he put his fingers inside me and they weren’t gloved. Mom, he hurt me.'” Chelsea’s mom wants to go back immediately, but Chelsea begs her not to. Chelsea’s mom tells her coach, Tim, what happened. The coach says no way, he’s known Larry Nassar for years.

Jeanette Antolin, a former gymnast who says she was abused while on the national team between 1997 and 2000: “You made me believe that you were my friend. You deceived me, you manipulated me, and you abused me. I truly believe that you are a spawn of Satan.”

Amanda Thomashow, who first reported Nassar to MSU and campus police in 2014 after she says Nassar sexually assaulted her during an appointment, spurring a Title IX investigation that later cleared Nassar: “You didn’t realize that you were building an army of survivors, an army of female warriors committed to obtaining justice. … You might have broken us, but from this rubble we will rise.”

Madeleine Jones, a former gymnast who is one of the victims Nassar has pled guilty to sexually abusing: “You saw me, a little child of God, as an object you could use to make yourself feel more powerful. You took away my power, my self-worth, my emotional development, my happiness and my innocence…Now I understand that I lived because I’m meant to live. I’m meant to be happy, and I need to be alive to put abusers like you in jail.”

“Larry Nassar is not sorry for assaulting me, he’s only sorry he was caught for it,” said Jones.

Nicole Soos, a former figure skater: “I kept repeating in my head, this is a mistake, this isn’t real. I thought, ‘He’s a famous doctor, there’s no way he’d do something inappropriate in front of my mom.’ Well, I was wrong. He used his power and position in society to earn our trust so that he could use us for his own sexual pleasure and gratification…Sometimes I can’t even tolerate another person touching me in an intimate situation without feeling physical pain and experiencing these visual flashbacks. I’m in the room again, on that table, reliving these events to this day.”

Tiffany Thomas-Lopez, a former MSU softball player: “The army you choose in the late ’90s to silence me, to dismiss me and my attempt at speaking the truth will not prevail over the army you created when violating us. We seek justice, we deserve justice, and we will have it.”

Megan Halichek, a former gymnast who went to Nassar when she was 15 after she suffered a fractured spine injury: “He was the only one that could help me. He was absurdly nice and did everything he could to make me feel comfortable when he saw me. Most of all, he gave me hope. Here I was, a scared little girl in excruciating back pain. This grown man confidently offered me salvation, healing freedom. But he turned out to be a monster. He was an unwarranted intruder to my most private, never been touched places. Again, and again, and again he abused me all while telling me tales of his Olympic journey.”

Jennifer Rood Bedford, a former MSU volleyball player: “My first reaction was to question myself, to blame myself. I wanted to believe the best in people, but no matter how much I rationalized—he’s a doctor, he’s trying to help you, you should be grateful he’s treating you, he didn’t mean for that to happen—I couldn’t shake the voice in my head that something wasn’t right. But how could I tell someone? I was afraid that if I told someone the truth, that they would think I was lying, that I was one of those athletes trying to stir up trouble…I am a warrior. I know the end of my story: I will win.”

Rood-Bedford says she forgives #Nassar. Take a listen to what she has to say to him. pic.twitter.com/fmB8FcGS3T

Ashley Erickson, a former gymnast who was a patient of Nassar’s between 1999 and 2016: “I have a question for you: Why? Why did you feel that you could do this to us and not only get away with it, but also that you were allowed to. You were the adult. You were the doctor…I want the nightmares of you coming into my room to go away. … I want to be the same Ashley to my family that they once knew.”

McKayla Maroney, an Olympic gold medalist who says she was abused by Nassar: “I was told to trust him, that he would treat my injuries and make it possible for me to achieve my Olympic dreams. Dr. Nassar told me that I was receiving ‘medically necessary treatment that he had been performing on patients for over 30 years.’ As it turns out, much to my demise, Dr. Nassar was not a doctor, he in fact is, was, and forever shall be, a child molester, and a monster of a human being. End of story! He abused my trust, he abused my body and he left scars on my psyche that may never go away. … A simple fact is this, if Michigan State University, USA Gymnastics, and the US Olympic Committee had paid attention to any of the red flags in Larry Nassar’s behavior, I never would have met him, I never would have been ‘treated’ by him, and I never would have been abused by him.”

Jordyn Wieber, an Olympic gold medalist and member of the 2012 London Olympic gymnastics team who spoke out publicly for the first time about the abuse she faced: “I thought that training for the Olympics would be the hardest thing I would ever have to do. But in fact, the hardest thing I’ve ever had to do is process that I’m a victim of Larry Nassar. It has caused me to feel shame and confusion, and I’ve spent months trying to think back on my experience and wonder how I didn’t even know this was happening to me, and how I became so brainwashed by Larry and everyone at USA Gymnastics, both whom I thought were supposed to be on my side.”

Aly Raisman, a three-time Olympic gold medalist: “You think this is hard for you? Imagine how all of us feel. Imagine how it feels to be an innocent teenager in a foreign country, hearing a knock on the door and it’s you. I don’t want you to be there, but I don’t have a choice. Treatments with you were mandatory…You never healed me. You took advantage of our passions and our dreams…If over these many years, if just one adult listened and had the courage and character to act, this tragedy could’ve been avoided. I and so many others would’ve never ever met you. Larry, you should’ve been locked up a long, long time ago…Over those 30 years, when survivors came forward, adult after adult protected you, telling each survivor it was ok, that you weren’t abusing them. How do you sleep at night? You are the person they had ‘take the lead on athlete care.’ I cringe to think your influence remains in the policies that are supposed to keep athletes safe.”

This post has been updated to include additional testimony.