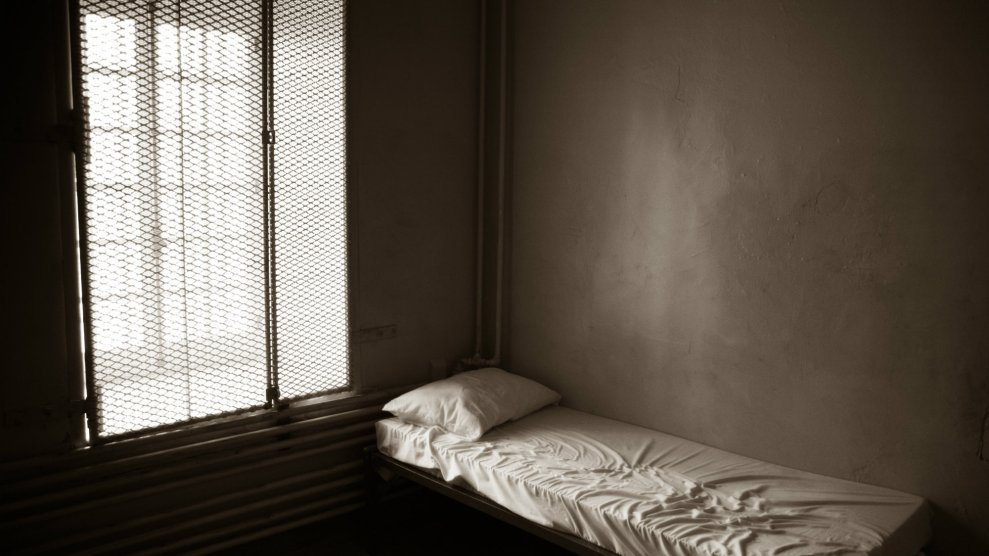 On Thursday, the American Civil Liberties Union and the Abolitionist Law Center, which advocates for the rights of prisoners, filed a federal lawsuit against officials in charge of the Pennsylvania Department of Corrections, alleging that their policy of holding death-sentenced inmates indefinitely in solitary confinement is in violation of the Eighth Amendment, which bans cruel and unusual punishments, and the Fourteenth Amendment, which guarantees equal protection.

“Solitary confinement is one of the most damaging things that you can do to a human being,” David Fathi, the director of the ACLU’s National Prison Project, told Mother Jones. “People lose their ability to interact with humans, because they’ve been deprived.”

Multiple studies have shown that even short periods of isolation can lead to emotional, cognitive, and psychosis-related symptoms. Many prisons and jails have used solitary confinement for an inmate who might be a danger to himself or other prisoners, or as a punishment for certain behaviors. But for decades, all Pennsylvania prisoners sentenced to death have been automatically placed in solitary. This used to be common, but many states including North Carolina and Missouri began moving away from the practice over the last decade.

According to the suit, the state of Pennsylvania has 156 prisoners at the State Correctional Institution-Greene and the SCI-Graterford awaiting execution; 80 percent of them have been in solitary confinement for than 10 years. The five plaintiffs named in the suit, who are between the ages of 46 and 50, have spent from 16 to 27 years in isolation.

Given that Democratic Gov. Tom Wolfe placed a moratorium on the death penalty  in 2015, it’s unlikely that their executions will take place in the near future—if at all. But Wolfe only made official a practice that has been in place for nearly 20 years. Pennsylvania hasn’t put anyone to death since 1999; only three people have been executed in the state since 1976.

The lawsuit alleges that the inmates are subject to minimal human interaction and prolonged isolation. On most weekdays, they spend 22 hours in cells that are roughly the sizes of parking spots. On weekday mornings, they are allowed two hours of outdoor exercise in a small enclosure. Other than taking a shower three times a week, sporadic trips to the library, and non-contact visits with family or clergy members, this is the only time death row prisoners are permitted to leave their cells.

Not even nighttime brings respite in the form of sleep. Their cells are dimly illuminated, and correctional officers open a solid steel doors, which makes a considerable amount of noise, and shine bright flashlights into the cell every half an hour. Inadequate heating adds additional punishment during the winter months. Over the weekends, death row inmates are confined for 24 hours a day leading to 70 hours of no human contact or interaction between Friday morning and Monday morning.

“It is established beyond dispute that solitary confinement puts prisoners at risk of substantial physical, mental and emotional harm.”

“It is established beyond dispute that solitary confinement puts prisoners at risk of substantial physical, mental and emotional harm,” the lawsuit argues. Consider plaintiff Mark Spotz, who is 46 years old and was sentenced to death in 1996 for murdering four people in a killing spree. He has spent the last 21 years in solitary confinement. In the lawsuit, Spotz describes being held in isolation for more than two decades as “psychological torture.” He has been diagnosed with acute stress disorder and post-traumatic stress disorder. Spotz is also experiencing additional symptoms of prolonged isolation such as memory problems, depression, and anxiety. Most alarming, Spotz also hears voices and experiences hallucinations. He tried to commit suicide last year.

Spotz is only one example of how solitary confinement “simply destroys people and makes them unable to function,” Fathi says. The purpose of prison is to teach there are consequences to your actions, “but that whole philosophy is thrown out the window when it comes to prisoners sentenced to death,” he explains. The ACLU and Abolitionist Law Center are hoping that this lawsuit spurs prison officials to treat death row prisoners the same way as others.

Other Pennsylvania prisoners, not on death row, are sometimes placed in solitary, but they are subject to reviews and able to earn their way out with good behavior. But for death row prisoners, “it’s automatic and permanent,” says Fathi, “and it doesn’t matter if you’ve had spotless conduct for 25 years.”