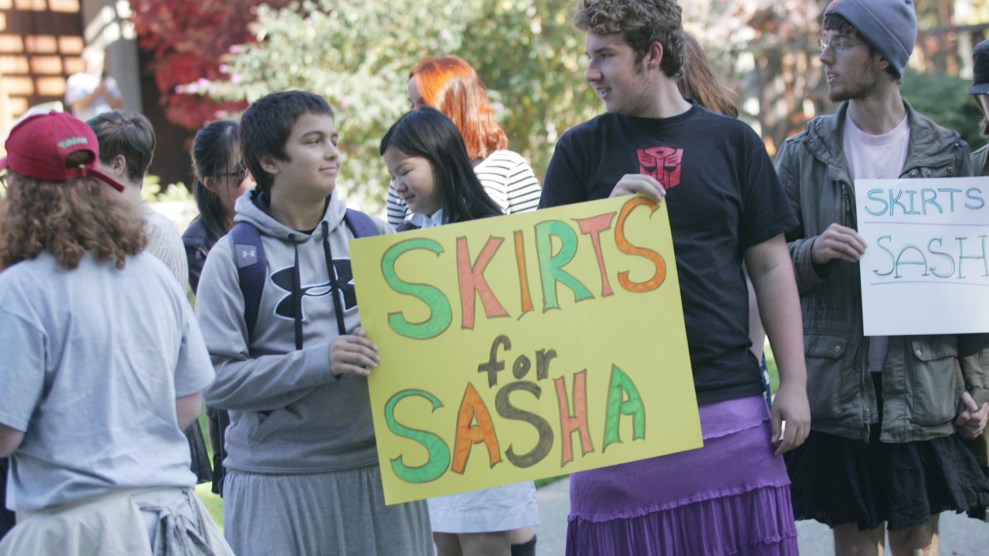 It seemed to happen so suddenly. One minute Sasha Fleischman, an agender teen on their way home from high school, was dozing near the back of a city bus in Oakland, California. The next minute they were screaming, enveloped in a ball of white flames.

The boy who put a lighter to Sasha’s gauzy white skirt, Richard Thomas, was also on his way home from school. His friends had egged him on to try what he envisioned would be a funny prank—the fabric would smoulder, he thought, but then Sasha would put it out, surprised but not hurt. But after he hopped off the bus and started walking away, he heard shrieks of pain.

The fire on the 57 bus made national headlines. Sasha’s legs were covered with second- and third-degree burns; Richard was arrested the next day and then tried as an adult, facing the possibility of life in prison over felony charges that were enhanced with a hate-crime clause. The incident shook liberal Oakland, one of the country’s most diverse and expensive cities, but also a place with high rates of crime and income inequality.

Journalist and novelist Dashka Slater (a regular Mother Jones contributor) spent three years investigating that fire and its aftermath, first for the New York Times Magazine, and then for her own young-adult book, The 57 Bus, out in October. The result is a tragic, intimate look at two bighearted teens with very different backgrounds: a white kid from the middle-class foothills, grappling with their gender identity, and a black kid from a rough neighborhood, recovering from a robbery at gunpoint and the death of a close friend.

At a time when gender-nonconforming people face staggering rates of homicide, and as bullying spikes in schools, Slater’s book—a poignant read for anyone interested in gender, race, and justice—raises an uncomfortable finding: Most hate crimes in the United States aren’t committed by middle-aged guys with swastika tattoos, but by young men in their teens or early 20s, often coming home from school. So how should we think about these acts of violence when the perpetrators are teenagers? I caught up with Slater to find out how the fire on the 57 bus changed her understanding of juvenile justice.

“Most of us, if we look at our lives, have been both villains and heroes at different times.”

Mother Jones: How would you describe Sasha and Richard?

Dashka Slater: At the time the book takes place, Sasha is 18, an Oakland kid who goes to a small private high school, is agender, neither male nor female, and is really into games of all kinds and constructing languages and Russian literature and politics. And Richard is 16 and attends a large public high school, lives with his mom and younger brother and stepfather, and has just gotten out of a group home where he spent most of the previous year.

MJ: What drew you to their story?

DS: I was interested in a couple of things. I didn’t know what the word “agender” meant when I started researching this story, and I was interested in that. And then the fact that Richard had been charged as an adult and was facing the possibility of life in prison was something I was curious about. The question for me was how can you tell that somebody who has biases, terrible views, bigotry—whatever it is, because at that point I didn’t know what Richard’s story was—how can you tell that that person is irredeemable at the age of 16?

MJ: After the fire, a lot of reporters referred to Sasha as a man in a kilt, using male pronouns, which bothered Sasha. What did you try to keep in mind when reporting on Sasha?

DS: At the beginning, reporters misgendered Sasha partly because it was very early in the reporting stages and they were working from a police report. Sasha’s family hadn’t come out yet and said Sasha is agender. Part of it was the way the media moves very quickly, so one story gets repeated over and over again, and catching up and correcting it gets difficult. My solution was to talk about it with them, and then they read their sections before the book was final to give me feedback.

MJ: How does adolescent brain development play a role in some of these crimes?

DS: When it comes to logic and reason in normal circumstances, teens actually think a lot like adults. They are absolutely as capable of understanding abstract ideas and reasoning and forethought. But under what is sometimes called hot cognition—that is thinking, under stress—the teen brain bypasses the centers of reason and is powered much more by emotion and impulse. Those times of hot cognition for adolescents are particularly times when they are with their peers. Because part of their developmental task is to figure out how to fit in with a group, they become very responsive to the mood of their peers and stop thinking, “Gosh, is this a good idea?” That can be dangerous.

MJ: Your book deals a lot with the idea of binaries. There’s the gender binary: We tend to split things into male and female, which doesn’t leave room for people like Sasha. But there are also pretty glaring binaries in our criminal justice system—things are either legal or illegal, you’re either a victim or an offender—and as you point out, that isn’t necessarily the best way to think about people who have committed a crime.

DS: Most of us, if we look at our lives, have been both villains and heroes at different times. One of the things about being a teenager is that you do a lot of dumb stuff, kind of bumbling through the world not understanding the implications of your behavior. Certainly it was true of me. One of the reasons I wanted to write this book for teens is because I want kids to understand that they are entitled to a lot of second chances, and I would like the world to provide those second chances. And unfortunately our criminal justice system doesn’t allow kids to be as flawed as they are, particularly kids who aren’t white and wealthy. The percentage of African American youths who do their time in adult prison is 58 percent.

MJ: So what do we do if we want to tackle violence against gender-nonconforming people or other marginalized groups, but we know that most hate crimes are committed by young men whose brains aren’t fully developed?

DS: That’s the big question, isn’t it? As we’re seeing an upswing in bias crimes, which are being fostered from above, how do we deal with these behaviors? I’m fully in support of saying it’s bad to be biased and it’s bad to harm people because of their membership in any kind of underrepresented group. But incarcerating people is not going to change their way of thinking if they are motivated by deep-seated prejudices. And if they’re not motivated by deep-seated prejudices but are simply acting impulsively and following the lead of a more biased peer, then incarceration is the place where those beliefs might be hardened or developed. I wish I could say I have the answer, but I don’t.

MJ: Liberal Oakland and Berkeley rallied around Sasha after the incident on the bus, but as some of Richard’s friends put it, a lot of people weren’t thinking about Richard and “how easy it was for kids who grew up in poor neighborhoods to take that wrong turn.” Is it possible for a community to have both conversations at once?

DS: In a way, they are the same conversations. How do we create a society in which young people get to be themselves and have the best options for living their lives? And Richard and Sasha had different obstacles to that. It’s easy to point to someone and say you’re biased and you’re bad; it’s harder to say, “I have some responsibility for whether all the kids growing up in my town are doing okay.” If we have a flaw in the Bay Area, it’s that we can get very focused on manifesting the correct belief system, in how we use language or what we are quote-unquote “accepting of,” and not dig into these underlying structural problems that make life easier for some kids than for others. That involves engaging with our criminal justice system, our schools, and the employment discrimination and gentrification pressures that make it difficult for families to live here.

MJ: Would you have done anything different with your book if you were targeting an older adult audience?

DS: Had I been writing for adults, I would have felt obligated to freight it with a lot more policy, because that’s how we signal that we’re writing a serious nonfiction book. While I love writing about policy, it was very freeing for me to just hew so closely to the narrative and to the stories of the characters. The other thing that was different about writing for a young adult audience is that there’s actually a lot of freedom in the young adult and children’s book world in terms of genre mashups. In a book that’s about breaking down the binaries, I loved the freedom I felt to include poetry and lists and transcript of text messages and all the sort of collage-y things.

MJ: What are some of the best books you’ve read lately on the intersection of gender and race and criminal justice?

DS: I’ve been looking at what kinds of nonfiction are available for young people on these issues, and there are two books I really liked: One is called Queer, There, and Everywhere, by Sarah Prager, and it’s 23 people who changed the world. It just looks back through history at different gender-nonconforming people—lesbian, gay, bisexual, queer in all its manifestations throughout history—and it’s sort of a wonderful antidote to this idea that queer identities are something that just [recently] happened. The other is a book called Racial Profiling by Alison Marie Behnke. It’s a really good explanation of some of the mechanisms of racial profiling and racial injustice and terms like microaggression and Islamophobia and how all this stuff manifests.

MJ: Do you still keep in touch with Sasha and Richard? How are they doing now?

DS: One of the weird things about writing about teenagers is that they change a lot and they get to reinvent themselves, and so one decision I made is to kind of let their public lives end when the book ends, so that they get that reinvention I feel like they’re entitled to.