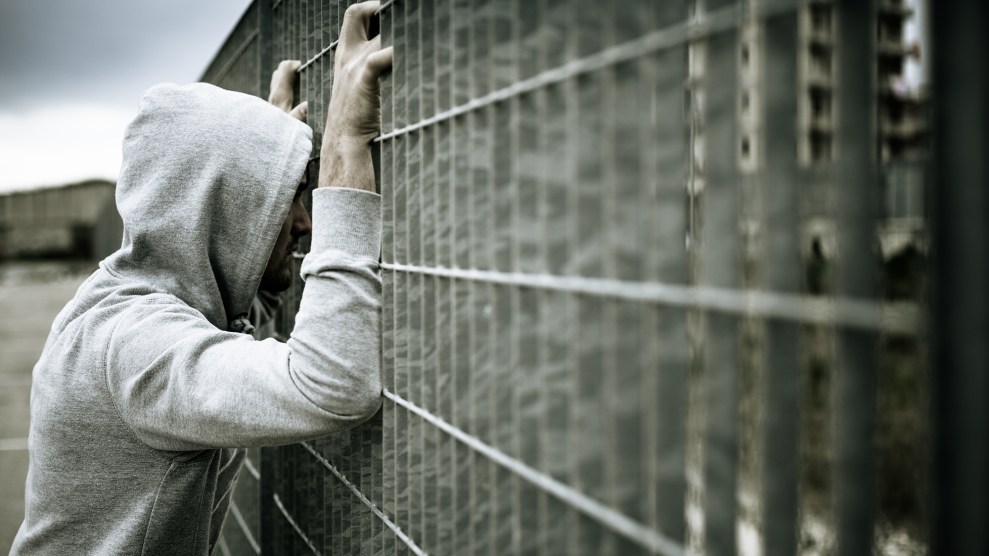 On Wednesday at FCI Sandstone, a low-security federal prison in Minnesota, inmates were preparing for a congressional hearing. They couldn’t fly to Washington, of course, but they’d voted to add C-SPAN to the facility’s short list of authorized television channels. They planned to watch politicians grill the Trump administration’s new Bureau of Prisons chief about recent cuts to reentry programs.

The men wanted answers. In recent months, many had been told they were losing some or all of the time they’d been promised at the halfway houses where they were supposed to finish up their sentences, look for jobs, and get their feet back on the ground. Their families were upset, too: Now their loved ones would stay in prison longer and miss the winter holidays they’d hoped to celebrate together.

“The impact is widespread…We’re talking thousands of inmates probably whose dates are being pushed back.”

“This completely changed my release plan,” Nathaniel Augustus III Smith, one of the inmates at FCI Sandstone, told me in an email. He’d been looking forward to reuniting with family members in Texas in October. “Of the people I personally know that had halfway house dates, only one still retains his original date,” writes another prisoner, Timothy John Ehrmann, who has been preparing to leave for a halfway house ever since President Barack Obama commuted his sentence last year. “I can’t imagine what this is like systemwide.”

The lawmakers wanted answers, too. “It’s my understanding that there is some efforts to cut back on halfway houses,” said Rep. Elijah Cummings, the top Democrat on the House Oversight and Government Reform Committee, during Wednesday’s three-hour hearing, which covered everything from prison staffing to reentry programs.

Cummings was referring to reports from earlier this fall that the Bureau of Prisons had opted, for budgetary reasons, not to renew 16 of roughly 180 contracts for halfway houses, causing some of them—including a house in Duluth, near FCI Sandstone—to shut down: “Can you explain the rationale with regard to that, Mr. Inch?”

Mark Inch, who became the prisons director just three months ago, tried to assure Cummings. “There is absolutely no intent to cut back in the program,” he said. The contracts that weren’t renewed would only affect underused houses in low-population areas, he added—about 1 percent of the total bed space for federal halfway houses nationally. The changes, he said, were intended to make the reentry system more efficient.

Inmates and halfway house operators say otherwise. Over the past several months, hundreds of prisoners have reached out to the advocacy group Families Against Mandatory Minimums, complaining that their halfway house dates have been delayed or their time in the houses has been significantly reduced. “The impact is widespread,” Molly Gill, the group’s vice president of policy, told me recently. “We’re talking thousands of inmates probably whose dates are being pushed back.”

The BOP has slashed funding for social service coordinators: “They took away the person that was going to welcome [prisoners] home, basically.”

The problem appears to go deeper than Inch admitted on Wednesday. In addition to not renewing at least 16 contracts, the Bureau of Prisons has changed the rules for many other halfway houses, requiring them to host fewer inmates. That’s according to Anne Connell-Freund, the former president of the International Community Corrections Association, a trade organization composed of halfway house operators. As waitlists for beds grow, some inmates are being held longer in already overcrowded prisons—federal lockups were at 14 percent overcapacity during the last fiscal year, per  Justice Department statistics.

Meanwhile, the Bureau of Prisons has told halfway house operators that they’ll no longer receive funding for cognitive behavioral therapy (a requirement under the Obama administration) or to hire social services coordinators who help people line up jobs and housing, get driver’s licenses, and learn how to use cellphones and other technologies they missed in prison. “They took away the person that was going to welcome them home, basically,” says Connell-Freund. “It’s not exactly known how many halfway houses and how many beds have been affected.”

Halfway houses have been used in the United States since the 1960s but became more popular after 2007, when Congress passed a bill giving all prisoners the chance to petition for up to a full year in a house at the end of their sentence. From late 2013 to mid-2016, about 37 percent of federal inmates leaving prisons went straight to halfway houses. Another 1 or 2 percent got home confinement, allowing them to live with their families while getting regular check-ins, often from halfway house staffers.

“It was a huge hit—layoffs and program reduction,” says one halfway house executive. “Fingers crossed we don’t close altogether.”

Even when a single house closes its doors to federal prisoners, there are ripple effects. “It was a huge hit—layoffs and program reduction,” says Aaron Wagner, chief administrative officer for Transitions, whose federal contract for a halfway house in Ashland, Kentucky, was not renewed this summer. “Fingers crossed we don’t close altogether.” His staffers had to stop their check-ins with nearby federal prisoners on home confinement, he says, and federal inmates at the halfway house were transferred to other facilities: “I heard rumors some went to Maryland, Virginia.”

On Wednesday, the Bureau of Prisons director said inmates affected by the 16 contract non-renewals weren’t sent too far afield. Wagner hasn’t been told exactly where the federal inmates transferred from Transitions wound up, he says, but there are no other halfway houses nearby.

I heard similar stories from halfway house operators in other states, from Ohio to Colorado, who lost contracts with the feds. Some complained they’d been given little information from the Bureau of Prisons, and that they suspect their inmates were sent to houses far away, given the lack of options. “They’re essentially doing reentry twice,” Gill told me. At the new halfway house, inmates will need to get an ID and a job. Then, at the end of their stay, they will presumably move back to their hometowns and have to start the process all over again.

“We believe that these changes in programming and personnel will compromise public safety,” eight senators wrote.

Because the contract changes resulted in fewer available beds, the Bureau of Prisons has been cutting the amount of time prisoners can stay at the halfway houses—maybe a few months instead of half a year, Connell-Freund says. For some people, she notes, that’s not enough time to find a decent job, reunite with families, and complete drug treatment or other programs that can help keep them off the streets and out of trouble.

In October, eight senators wrote to Inch to express concern. “We believe that these changes in programming and personnel will compromise public safety, decrease inmate accountability, and lead to increased recidivism rates,” they wrote. “These changes…threaten to make our communities less safe while increasing BOP operating costs over time,” since it’s more expensive to hold someone in prison than in a halfway house.

There is no comprehensive research as to how halfway houses affect recidivism. The Obama administration endorsed them as a key tool for reentry, and the current Justice Department’s Office for the Inspector General says they are often beneficial, particularly for high-risk inmates. But the OIG adds that some studies have shown they increase recidivism among low-level offenders, who may pick up bad habits while mixing with more hardened state inmates at the houses. “There are good halfway houses and bad halfway houses,” says Gill, from Families Against Mandatory Minimums. “What’s important is to have the right quantity of halfway houses for the people who need them, and the right quality so they’re actually helping people transition home.”

On Wednesday, advocacy groups and the inspector general’s office called for more individualized assessment of inmates’ reentry needs so that people who would benefit from halfway houses can get a spot, and those who don’t can go on home confinement. “If the Bureau of Prisons is not tracking data on these services or measuring their effectiveness at reducing recidivism, then it cannot know if its programs are working or if cuts are indeed justified,” Rep. Cummings said. “We cannot do our work effectively and efficiently if information is not available or does not exist.”

“Trying to get the information out of the Federal Bureau of Prisons is very, very, very difficult…Requests just go into a black hole.”

Cummings said reentry programs in his Maryland district have struggled under Trump. The halfway house for federal inmates in Baltimore “is the largest such facility on the East Coast,” he said, “but the occupancy has fallen sharply due to recent BOP cuts.” The facility—which is not on the list of 16 —”was given essentially no notice to prepare for these cuts. Now this facility is struggling to meet its costs.” Inch reiterated that he had no intention to scale back halfway houses, but claimed the Baltimore facility had “overbuilt capacity.” He said it would be inappropriate to get into the weeds of contracting at the hearing, but that he’d swing by Cummings’ office later to “really talk.”

Halfway house operators are also growing frustrated at what they describe as a lack of transparency from the BOP over contract changes. “Trying to get the information out of the federal Bureau of Prisons is very, very, very difficult,” says Connell-Freund. “Requests just go into a black hole.”

As it turned out, the prisoners at FCI Sandstone never got to watch that hearing. “We all sat around in anticipation and it never came on C-SPAN,” one of them told me. C-SPAN instead aired the House Judiciary Committee hearing on Russian interference in the 2016 election, while the prisons hearing was relegated to a livestream on the House Oversight Committee’s website. And “we don’t have computer access, except for this very limited email service,” the inmate explained.

Another prisoner hoping to watch was Fred Skelton, 51, who says he was originally supposed to leave for a halfway house in St. Louis on Friday. But several months ago, he was told the house wouldn’t have space until next spring. What’s more, his stay would be reduced from 10 months to 6—after he’d spent nearly two decades behind bars for drug offenses. Skelton is afraid that won’t be enough time for him: “everything is different from when i left, I have to buy a car, clothes, so many things. I found out they don’t even write paychecks, it’s all done by computers,” he writes.

His grandkids had been looking forward to his return for the holidays. “my 9yr old said why Papa?? I told him no bed [space]. He told me that i could have his bed, tell them!” Skelton wrote. “You already know, that took allot to hold me emotions in check…I laugh at times to keep from crying.”