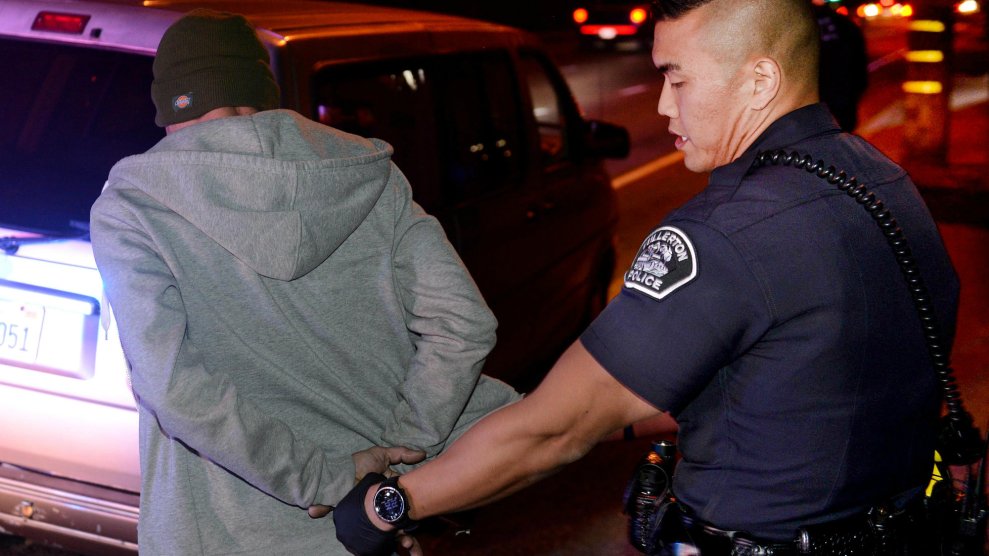 An arrest for marijuana DUI in 2016—California's laws on that front haven't changed.Bill Alkofer/ZUMA Press

You’ve probably already heard legal weed is coming to California in 2018. Actually, possession of an ounce or less and private recreational use both became legal in November 2016, when Golden State voters approved Proposition 64—the law also allows for legal possession of eight grams of marijuana concentrates and private cultivation of up to six plants per residence. Possession of small amounts has been a ticket-only offense since 2011.

But bigger changes kick in on January 1. That’s when California joins Alaska, Colorado, DC, Nevada, Oregon, and Washington as the sixth state to begin licensing local businesses to sell pot to anyone 21 and up—also the legal age for tobacco and alcohol products. (Massachusetts will join that club next July.) Taxing marijuana products has brought Colorado hundreds of millions of dollars in new revenues, about half of which goes toward K-12 education. California officials expect an even bigger tax windfall.

We answer many of your legalization questions right here. But with legal sales on the horizon, you might also be wondering: What happens to the people already in jail on marijuana charges? And how will pot be policed? And will that old conviction still be on my record?

In fact, the punishment schemes changed in November 2016, at which time people serving sentences for or previously convicted of a cannabis-related offense could start applying to have their sentences reduced or convictions “redesignated.” More than 4,500 people have already done so, and the legal changes could have a profound impact on hundreds of thousands of lives down the road. Here’s a rundown of what’s changed, and what to expect come January.

What’s changed on the criminal-justice front?

Prop. 64 slashed penalties for many of the more than a dozen existing marijuana-related offenses outlined in California’s criminal code, with differing consequences for adults 21 and up, adults 18 to 20, and juveniles. Most adult felony pot offenses were reclassified as misdemeanors punishable by up to six months in jail, including possession with intent to distribute (without a license) and the sale or transport of marijuana. Possession of more than the permitted amount of marijuana remains a misdemeanor.

Prop. 64 also carves out a new criminal infraction—punishable by a fine of up to $100—for smoking in public. (Before, anyone caught doing so could be cited for possession.) Only two offenses—selling weed to minors and manufacturing synthetic marijuana—are still felonies. But conduct that is legal for adults 21 and older will be a ticketable offense for adults 18 to 20. The same penalties apply to both groups for any illegal conduct.

Another recent California law makes it a ticketable offense to consume cannabis while driving or to drive with an “open container” of marijuana—essentially, any weed receptacle (a blunt or a vape pen would qualify) or consumable weed product—in the car. But California’s DUI laws are the same as they ever were, which means you’ll still be in serious trouble if you’re caught driving while intoxicated—on weed or anything else.

Among the most important Prop. 64 changes is that people charged with certain pot offenses will no longer be burdened by the same consequences that plagued them in the past. “A marijuana conviction or even just an arrest can really prevent people from receiving employment or public housing or access to [federal] student loans… So certainly the removal of that conviction or the lessening of that conviction can make a whole host of opportunities available to people that weren’t available before,” says Jolene Forman, an attorney at the Drug Policy Alliance, a policy reform group that spearheaded efforts to pass Prop. 64. “Even if you have other felonies, drug convictions are treated differently by a lot of private employers.”

How does all of this apply to minors?

Pot is still illegal for minors to smoke, sell, or posses, but Prop. 64 caps the penalties at community service—up to a few dozen hours—mandatory drug education classes, and/or counseling. The new law also requires that records related to marijuana offenses for juveniles be destroyed when the offender turns 18. So if your 16-year-old gets caught smoking at the park, he can expect to spend some weekends picking up trash—but the charge won’t follow him around. Resentencing and redesignation rules also apply to minors.

So, people locked up for stuff that’s now legal will get out?

Yes, they could—and some already have. Prop. 64 created a process through which anyone incarcerated or serving a term on probation, parole, or community supervision for a weed-related offense can petition a judge to have their sentence reduced if the previous conduct now classifies as a lesser offense. The law requires judges to resentence any such applicant, except in instances where it is determined that the applicant might commit a serious, violent felony upon release.

So if, for example, you were convicted of illegally selling pot—once a felony—you could petition to have the charge reduced to a misdemeanor, and your sentence reduced accordingly. If you were convicted of now-legal conduct, you could ask a judge to throw out your conviction and end your sentence. People who have already served sentences for pot-related crimes can petition to have the conviction redesignated, making it easier for them to get a job, for instance. (Here’s the DPA’s guide to the process.)

To ensure some of the profits from legal weed will benefit the communities most hurt by the war on drugs, some cities—including Los Angeles, Oakland, and San Francisco—are prioritizing dispensary licensing applicants with past pot-related convictions, or who live in communities with high arrest rates for weed. You can read more about that here.

How many people will be affected by these changes?

Pot arrests, after peaking in the early 1970s at hundreds of thousands of annual arrests, waxed and waned over the years, but dropped precipitously with decriminalization in 2011. Yet a 2015 Drug Policy Alliance report estimated that more than 6,500 people were incarcerated solely for a marijuana offense in California that year—or for multiple charges of which the pot-related charge was the most serious. The average sentence was less than six months for people jailed solely for a marijuana offense.

The number of people who have finished serving sentences but could still have weed-related offenses scrubbed from their criminal records could range from several hundred thousand to nearly a million, says Holcombe. Courts began accepting applications for resentencing and conviction redesignation immediately after Prop. 64 passed. As of December 14, more than 4,800 people have applied for one or the other, according to the Judicial Council of California. The application process could take three to six months, maybe longer, depending on the county, Holcombe says.

Time will tell, but evidence from other legalization states suggests things may play out that way. In DC, in 2015, the year private recreational use was legalized, 108 of the 128 arrests for smoking in public were of black people, according to another DPA report. Most of those arrests took place in a single black neighborhood, Forman told me. In Alaska, Colorado, Oregon, and Washington state, marijuana arrests dropped significantly post-legalization, but blacks and Hispanics continued to be disproportionately targeted. In 2014, a few years after decriminalization, blacks in California were jailed for weed-only offenses at a rate four times what would be expected based on population, according to data from the DPA—but other groups, including Latinos, were actually jailed at rates lower than their numbers in the population would suggest.

Part of the problem has to do with how legalization laws are structured, Forman says. If smoking pot is only legal on private property, homeowners can do it in peace, while people of color, who own homes at lower rates than white households, may be compelled to smoke outside. Private landlords can ban tenants from using drugs on their property, and it is generally illegal to smoke inside of public housing, which is federally funded and must abide by federal drug laws. Civil rights advocates worry that disproportionate enforcement will result in a heavy financial burden for people least equipped to handle it. “People who live in communities with a heavier police presence, people who live in public housing, they don’t necessarily have the safe places to use,” Forman says. “So they may be using on the street [or] somewhere in public and they are going to be stopped and cited.”