On Thursday morning, the St. Louis County Police Department took the ill-advised step of deciding to weigh in on the death of 12-year-old Tamir Rice, who was killed by a Cleveland police officer last month, with a Facebook post titled, “Kids will be Kids?”

The post, which the Guardian reported was written by officer Aaron Dilks, urged parents to sit down with their kids and warn them about the dangers of playing with an Airsoft gun. That’s the toy gun Rice had in a Cleveland park when 26-year-old rookie officer Tim Loehmann fatally shot him just seconds after pulling into the parking lot. The tragic incident was caught on surveillance video.

“If the type of gun is in question…the Police will respond as though it is a real gun until it can be confirmed one way or the other,” the post said. It provided instructions for children to follow if they find themselves in a similar situation to Rice: “Do not run away. They need to no longer have the gun in their hands, throw it away from them.” 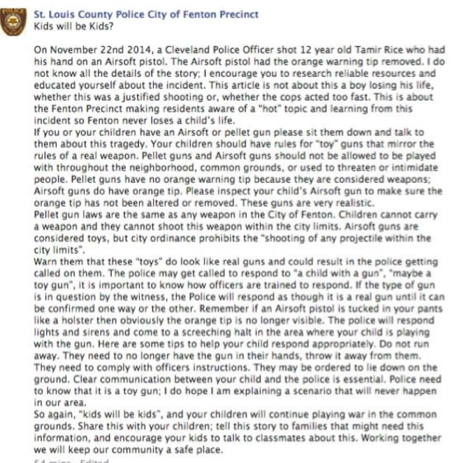 That may well be reasonable advice. But the timing of the post, replete with tone-deaf headline, was horrible: Not only did Rice’s death come just days after a St. Louis grand jury declined to indict officer Darren Wilson in the death of 18-year-old Michael Brown, but this post came within hours of a Staten Island grand jury deciding not to indict the NYPD officer whose choking of Eric Garner led to Garner’s death. After all the controversy surrounding its tactics in Ferguson, how could the St. Louis County PD fail to realize that any pronouncements that could be construed as absolving police of the Rice killing would inflame a volatile situation?

The Facebook post, blasted by critics on social media for being insensitive, was removed by late Thursday morning, as was a St. Louis County PD tweet that had promoted it.