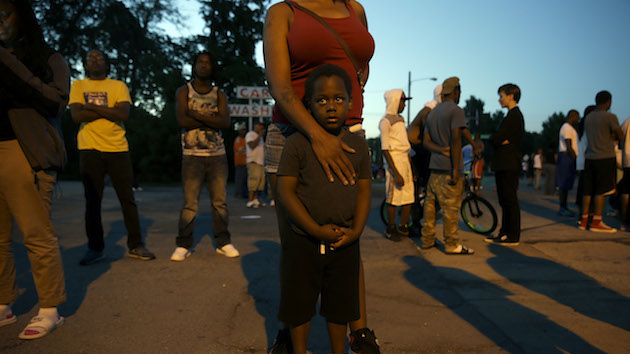 Jeremiah Parker, 4, stands in front of his mother, Shatara Parker, as they attend a protest Wednesday, Aug. 13, 2014, in Ferguson, Mo. Jeff Roberson/AP Photo

Starting tonight at 7pm Eastern time, a National Moment of Silence event will be playing out in gatherings big and small across the country. It’s headed up by a New York-based activist and social worker who writes online as Feminista Jones and talked to USA Today about the event:

After an activist posted on Twitter that there would be a vigil in downtown Manhattan for Brown, Feminista Jones reached out.

“I wonder why they always have vigils so far removed from the people who are most likely to be affected by police brutality,” she wrote back to the poster. “I just know that people in the Bronx and Brooklyn will struggle getting there on Sunday trains.” (The correspondence is documented in a Storify.)

Plans for the peaceful assemblies began through that platform, then moved to Facebook. It’s an update to activism Jones compares to “phone banking and letter writing — just reaching 90,000 people.”

“We’re having a national moment of silence — one chord, one silent voice — to honor not only Mike Brown, not only Eric Garner, but all victims of police brutality, especially those who have lost their lives,” she said.

The Root, the online black culture and politics mag, is using the #NMOS14 tag to post heartbreaking photos of unarmed black men shot by police over the years, from Amadou Diallo to Kimani Gray to Oscar Grant to far too many others.

To find an #NMOS14 event near you, check out the Twitter hashtag #NMOS14 and this Facebook listing of local groups.