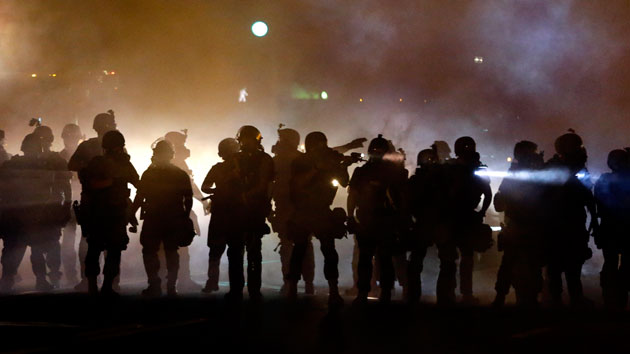 Police drift through a cloud of smoke on August 13 in Ferguson, Missouri Jeff Roberson/AP

The Ferguson, Missouri, police department’s display of armored cars, officers in riot gear, and assault rifles over the past week shocked Americans who didn’t realize how much military equipment is now available to local police departments. But since the 1990’s, more than 8,000 federal, state, tribal, and local police agencies across the country have armed themselves with the military’s excess gear, free of charge. The inventory includes everything from office furniture and first aid kits to aircraft, armored cars, rifles and bayonets, according to the Defense Logistics Agency, the Department of Defense office that manages the transactions under an initiative called Program 1033.

In June, Rep. Alan Grayson (D-Fla.) introduced an amendment to de-fund aspects of the program. Grayson’s bill would have exempted certain military equipment, including planes and armored cars, from Program 1033. That effort failed; just 62 members of the House of Representatives voted for the measure, with 355 voting no. Maybe the outcome shouldn’t have been a surprise: According to a new analysis of campaign finance data, the politicians who voted against Grayson’s bill received, on average, 73 percent more campaign donations from defense industry sources from 2011 through 2013 than their peers who voted for it.

The analysis—conducted by the Berkeley-based research group MapLight using data provided by the Center for Responsive Politics—also found that of 59 representatives who received more than $100,000 from the defense industry from 2011 through 2013, all but four voted against the amendment.