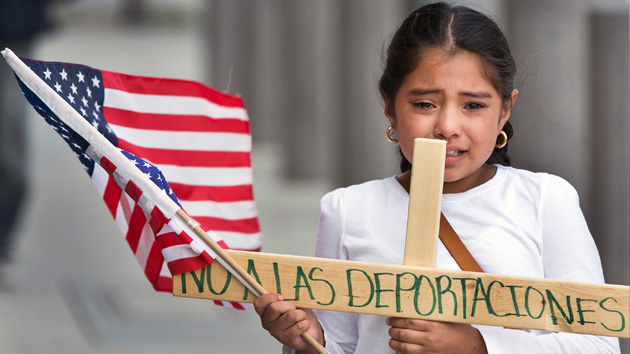 Last Friday, the Obama administration announced the launch of “justice AmeriCorps,” a new program that will provide legal support to unaccompanied migrant children facing deportation. As Mother Jones has reported extensively, the number of undocumented children caught illegally entering the US without a parent or guardian has more than doubled in recent years, to nearly 39,000 in 2013.

The new initiative is sponsored by the the Department of Justice’s Executive Office of Immigration Review and the Corporation for National & Community Service (CNCS), which runs AmeriCorps. According to a CNCS statement, around 100 lawyers and paralegals will be recruited to provide legal services and representation for unaccompanied kids under 16 facing removal hearings. Nonprofits in 29 cities with high immigrant populations will enlist and supervise the legal volunteers, who will commit to one year of service as AmeriCorps members. Attorney General Eric Holder called the program “a historic step to strengthen our justice system and protect the rights of the most vulnerable members of society.”

This marked the administration’s second major recent announcement regarding the influx of unaccompanied children. Last Monday, the White House announced the creation of a task force to ensure that federal agencies are “unified in providing relief to affected children,” as well as plans to relocate 600 kids from border holding cells to an emergency shelter at Naval Base Ventura County in Southern California.

In his statement, Holder noted that many of the children and teens who will be assisted by the new AmeriCorps program “are fleeing violence, persecution, abuse, or trafficking.” This description of the circumstances under which children migrate alone matches the findings of a report by the United Nations High Commissioner for Refugees. Of 400 unaccompanied migrant children interviewed, 58 percent “had suffered, been threatened, or feared serious harm” that might merit international protection.

As Wendy Young, executive director of KIND, a nonprofit that helps unaccompanied immigrant kids find pro bono legal support, told Mother Jones’ Ian Gordon, “This is becoming less like an immigration issue and much more like a refugee issue. Because this really is a forced migration. This is not kids choosing voluntarily to leave.” Deported children often return to the same dangerous or desperate situations they attempted to escape, further burdened with smuggling debt. The new initiative will attempt to curb this problem by training its members to identify signs of human trafficking and abuse in the children they serve.

Kimi Jackson, director of ProBAR, which provides legal services to detained children in South Texas, said in an email that “this initiative is a good step. Currently, the majority of kids appear in court and represent themselves without a lawyer. Attorneys for released kids are urgently needed.”

Although the program aims to serve the “most vulnerable” unaccompanied children, the 100 funded lawyers and paralegals will only be capable of providing assistance to a fraction of the 74,000 children anticipated to be apprehended by Border Patrol this year. CNCS estimates that 10,000 unaccompanied kids will appear in immigration court in the 29 participating cities in the 2015 fiscal year.