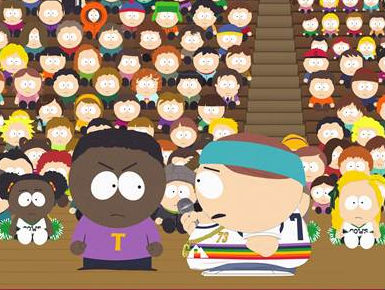 On the next episode of South Park, Eric Cartman becomes a fourth-grade fusion of Brad Pitt and George Zimmerman. Just two weeks ago, the Comedy Central series ran an episode addressing the controversy surrounding the NSA‘s domestic spying program; the show’s creators Trey Parker and Matt Stone (and the rest of the writing crew) have a well-established track record of mining recent major news stories for their satirical jabs.

According to a press release, “the world faces death, destruction, chaos and Eric Cartman” in an episode titled, “World War Zimmerman.” Cartman, the series’ iconic and fascist child-madman, is “deeply disturbed by a single person who he sees as a threat to all humanity. He races around the country to put an end to Patient Zero, the ticking time bomb that is Token.” (Token Black is the richest kid in South Park and also the Colorado mountain town’s only black kid.)

In this 11-second preview clip, Cartman frantically waves a handgun in public while bystanders are trying to enjoy their sunny day. “Everyone clear the streets! We gotta get the fuck outta here!” Cartman says.

The episode takes its cues from the summer’s zombie-takeover movie World War Z (in which Brad Pitt also searches for a “Patient Zero”), as well as George Zimmerman and the 2012 killing of Trayvon Martin in Sanford, Florida. South Park has pulled off these mash-ups of pop-culture and big news before; for instance, their 2008 presidential election episode turns into a parody of Ocean’s Eleven (another film starring Pitt). As for taking on racially charged issues in America, South Park aired the 2007 episode “With Apologies to Jesse Jackson,” a comic exploration of the use and effect of the word “nigger.” Beyond that, the show has weighed in on Occupy Wall Street, conservative anti-immigration hardliners, Al Gore, Glenn Beck, media coverage of Terri Schiavo, caricaturing the Prophet Muhammad, and a whole host of hot-button issues and personalities. Nowadays, South Park is arguably more famous for its irreverent social and political commentary than for the scatological and envelope-pushing crude humor that first made the show a hit.