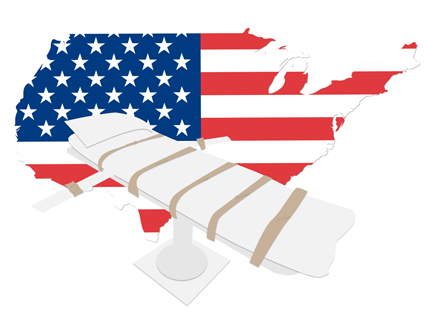 At 7 p.m. EST on Monday, Georgia is set to execute Warren Hill, who has been on death row since 1989 for murdering his cellmate with a wooden board. (Hill had, at the time, been serving a life sentence for murdering his girlfriend.) That in itself isn’t especially unusual, except that according to every expert who has examined him, Hill is mentally disabled—and states are prohibited from executing mentally disabled individuals under a 2002 Supreme Court decision.

At this point, no one seems to dispute that Hill meets even the state’s high standard for proving he’s mentally handicapped. But Georgia contends—and in April, a federal appeals court agreed—that his mental capacities are irrelevant, because he is procedurally barred from making that case. That is, even though there is evidence beyond a reasonable doubt that Hill is unfit for execution, Georgia is going ahead with the lethal injection anyway, on a technicality; he’s all out of options.

But there’s another wrinkle. In February, a state court granted a stay of execution for Hill due to questions about the legality of the state’s lethal injection cocktail. The difficulty in acquiring new lethal injection cocktails is such that in February, Georgia sought to expedite the executions of its 94 death row inmates before its cocktails reached their March 1 expiration date. So in May, Gov. Nathan Deal (R) signed the Lethal Injection Secrecy Act, which classifies the state’s execution drug cocktail as a “state secret,” and therefore immune from judicial oversight:

Under the new law, judges—or anyone else, really—are prohibited from finding out what drugs are actually being used to execute death row inmates, and where those drugs are coming from. (In Oklahoma, for instance, lawyers have successfully blocked executions that make use of new, more experimental drugs.) Because the cocktail is unknown, it is impossible to know whether such an execution process would square with other Constitutional tenets, such as the Eighth Amendment prohibition on cruel and unusual punishment.

Hill’s last best hope now is the US Supreme Court, which had previously announced it would conference on the case in September. But that’s only pushed Georgia to speed up its own deadline. The law went into effect on July 1. On July 3, Georgia set the new execution date for Hill. We’ll keep you updated.