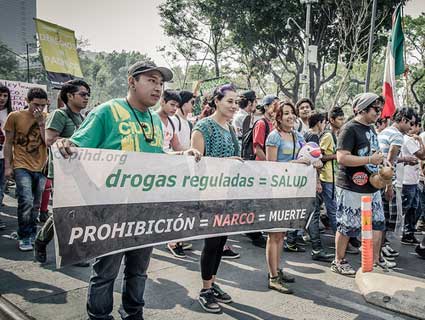 At last week’s annual summit of the Organization of American States, Latin American leaders distanced themselves from the United States’ drug policies and agreed to consider the widespread legalization of marijuana.

The OAS summit “was really a tipping point for this movement” to end the war on drugs, said Pedro Abramovay, a campaign director for Avaaz, a global nonprofit group that has petitioned the OAS to liberalize its drug policies.

The move comes as Uruguay debates a bill to legalize the production and sale of pot (it is already legal there for personal use) and as Chile considers decriminalizing it. Latin American leaders also have kept a close eye on how Colorado and Washington, having legalized marijuana, will go about regulating its consumption.

At the summit, which wrapped up on Friday in Antigua, Guatemala, delegates reviewed a recent OAS study that explores a range of options for a new regional drug policy that might include legalizing or decriminalizing cannabis, and even abandoning the fight against the coca production in some areas. “Never before has a multilateral organization engaged in such an inclusive and intellectually legitimate analysis of drug policy options,” Ethan Nadelmann, executive director of the Drug Policy Alliance, said in a statement. The delegates agreed to create a high-level commission to debate the study and make policy suggestions.

“What we have in mind is that countries should be free to pursue their own way.”

The Latin American movement away from US drug policy has been gaining steam gradually over the past few years. In 2009, former presidents Fernando Henrique Cardoso (Brazil), Cesar Gaviria (Colombia), and Ernesto Zadillo (Mexico) said that the time had come to “break the taboo” on exploring alternatives to the failed war on drugs. Other high-profile former leaders such as Jimmy Carter and Mexico’s Vicente Fox have echoed their call.

Yet it is the legalization of pot by two of America’s states that may end up being the biggest game changers, giving Latin American leaders political cover to part ways with Uncle Sam. “What we have in mind,” Abramovay told me, “is that countries should be free to pursue their own way.”