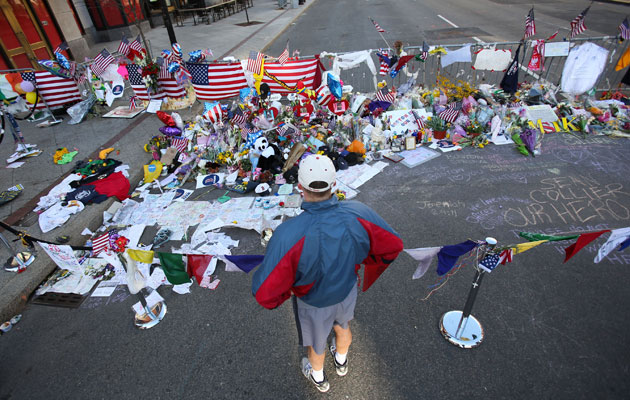 Dhzokhar Tsarnaev slung his backpack off his shoulder and dropped it on the ground. A few minutes later, an explosion ripped into the crowd that had gathered to watch the Boston marathon. As the frightened people around him turned and looked in the direction of the first explosion, Dhzokhar Tsarnaev glanced toward the chaos and then “calmly but rapidly” headed the other way. Ten seconds later, the bomb in Dzhokhar’s backpack went off.

That’s all on video captured by a local surveillance cameras, according to the criminal complaint filed Monday against the Dhzokhar Tsarnaev, the only surviving suspect in last week’s bombings, which killed three people and maimed more than two hundred others. The complaint lays out the government’s view of events, but it’s not proof of guilt, Tsarnaev’s culpability will be decided in court. The document charges Tsarnaev with using a weapon of mass destruction (federal law defines almost any explosive as WMD) and malicious destruction of property causing death. More charges could be forthcoming. Republican lawmakers had demanded that Tsarnaev, a naturalized American citizen, be held in indefinite military detention, the complaint affirms the Obama administration’s decision to keep Tsarnaev within the federal criminal justice system. It also upholds Obama’s promise not to put an American citizen in indefinite military detention. American citizens are not eligible to be tried by military commission, but more detainees at Gitmo have died than have been successfully tried in that system anyway.

The complaint goes into detail about how the police found the Tsarnaev brothers after they allegedly carried out the bombing. “Did you hear about the Boston explosion? I did that,” one of the brothers told a man they allegedly carjacked Thursday night, according to the complaint. The carjacking victim escaped while the brothers were shopping at a convenience store. The ensuing gunfight during which Dzhokhar’s brother Tamerlan was killed occurred when local Boston police located the stolen car, which, according to the complaint, contained two additional unexploded homemade bombs. Tsarnaev was found several hours later hiding in a boat in a Watertown backyard, with gunshot wounds to his neck, head, legs and hand.

It remains unclear whether Tsarnaev has been read his Miranda rights, though he has the right to an attorney and the right to remain silent whether law enforcement officers inform him of those rights or not.

You can read the whole complaint here: