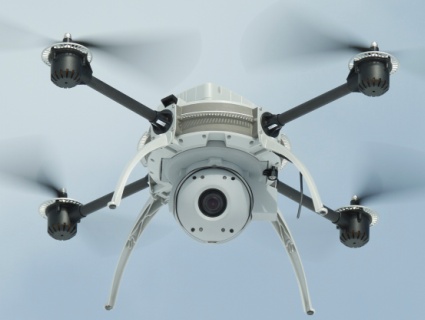 Alameda County Sheriff Gregory Ahern wants to buy a surveillance drone, or, as he prefers to call it, a “small Unmanned Aerial System.” At a meeting before the county’s Board of Supervisors last week, he claimed that he’d only use the drone for felony cases, not to spy on people or monitor political activists. But a few minutes later he’d seemed to change his mind, adding: “I don’t want to lock myself into just felonies.”

Catcalls and hisses erupted from a crowd of some 100 anti-drone activists. One man later called the proposal “an assault on my community.”

Around the country, a small but growing number of localities are considering the use of domestic drones—aircraft that are smaller, lighter, and cheaper (though not much less controversial) than what the military uses in Afghanistan. Police departments could outfit drones with infrared sensors that see through walls, with facial recognition software, or with technology that intercepts calls and emails. Yet the the federal government doesn’t do much to regulate how drones can use such technologies to collect information on private citizens.

Privacy activists are trying to put pressure on state and federal regulators by holding protests in this liberal and tech-savvy Bay Area county, which could become the first local government in California to buy a drone. “We oppose the use of public resources to surveil and suppress our communities,” said Michael Siegel, an attorney with Alameda County Against Drones, a group whose dozens of members wore bright pink “Say No To Drones” stickers. “We want a drone-free zone.”

Last year, Congress passed a law mandating that the Federal Aviation Administration open up US airspace to drones, and the FAA made it easier for law enforcement and other “public agencies” to get a drone permit. Records obtained by the Electronic Frontier Foundation (EFF) indicate that at least 81 public entities—including 17 sheriff’s and police departments—have petitioned the agency for the right to fly drones.

Alameda County’s Sheriff Ahern argues that buying something like a $100,000, three-pound “Scout” surveillance drone should be a no-brainer for the department. It would cost far more to purchase and operate a helicopter, and the drone can sample plumes of toxic chemicals in the event of a release, or use its infrared scanner to detect wildfires, or find lost children. “I think this is the future of technology,” he said, “and we can work together to make sure that this works appropriately.”

But barring written rules, privacy groups aren’t convinced that Ahern or other sheriffs can be trusted with drones. Last year, Ahern publicly pitched the drone to county lawmakers as a search-and-rescue tool, but told a different story in a grant application submitted to the Department of Homeland Security, which said the drone would assist with “surveillance (investigative and tactical)…intelligence gathering…suspicious persons, large crowd control disturbances, etc.” (Alameda County includes Oakland, where police battled with Occupy protesters last year.)

At last week’s meeting, Ahern put forth a stricter set of guidelines for using a drone, but that wasn’t enough to placate privacy advocates. ACLU attorney Linda Lye worried that drones could be used, intentionally or not, to photograph naked backyard sunbathers, and otherwise invade people’s privacy. “When technology dramatically lowers the cost of collecting information, the potential for collecting information based on idle curiosity is opened up,” she said. “In addition, unmanned aerial systems are intended to operate surreptitiously, and that changes the intrusiveness of the data collection.”

At the end of the meeting, it was unclear whether Ahern intended to move forward with his drone plan. But Alameda County isn’t the only place where drones have encountered a backlash. Earlier this month, the Seattle Police Department grounded two drones it had purchased in response to privacy concerns, and Charlottesville, Virginia, became the first American city to ban drone flights within city limits. California and 19 other states are considering legislation that would set standards for drone use. And last week, federal lawmakers introduced legislation that would prohibit domestic drones from being armed, require agencies to register drones and adopt privacy policies, and limit the use of drones to criminal matters in which warrants would be required.

Privacy advocates see an urgent need to regulate drones before they become even more advanced. Trevor Timm, a policy analyst for EFF, fears that Ahern will eventually want to replace his drone with something like Lockheed Martin’s Stalker, which can be recharged in the air with a laser and stay aloft for more than 48 hours. “This is why it is crucial to have rules of the road in place now,” he says. “Because once the door is opened, it will become much harder to restrict drone use in the future.”