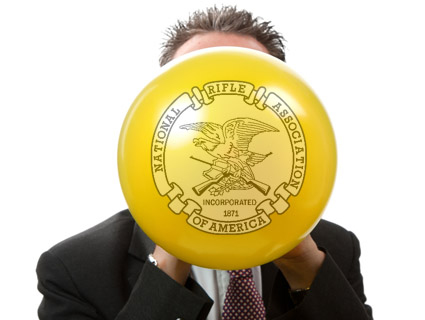 Whenever the National Rifle Association is accused of extremism, it trots out the claim that it represents a large chunk of America’s gun owners. Last week, it said it has 4.2 million members and counting. Though the group doesn’t publish its membership rolls and didn’t respond to questions about its size, there’s a lot of anecdotal evidence that it is making itself out to be bigger than it truly is.

Estimates of the size of the its membership have varied widely over the past 20 years. At different times in 2008, for example, it pegged its membership at 3 million and 4.3 million—a difference of more than 40 percent. A 2012 document for prospective sponsors of the NRA’s annual meeting (PDF), found by Bloomberg News, said the group had 4 million members, of which 2 million were the “most active and interested.” 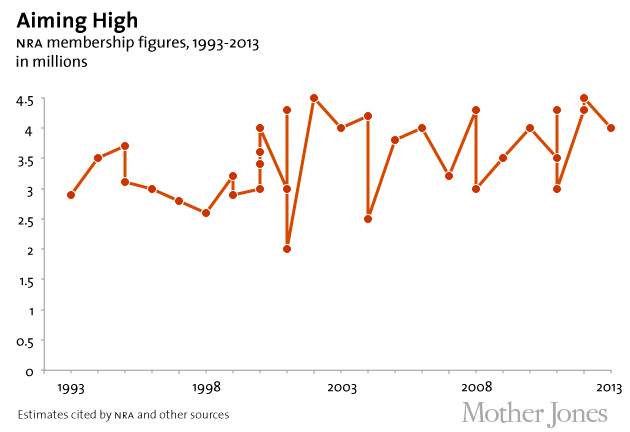 During the early 1990s, the NRA’s membership peaked at around 3.7 million before plunging to 2.6 million in 1998, according to newspaper stories at the time. The shrinkage coincided with criticism of the group’s extremist rhetoric around the time of the Oklahoma City bombing. If the NRA is to be believed, it quickly began replacing those lost members. But did it? After the late ’90s, reports of its size start to spread out like buckshot from a sawed-off bird gun.

In March 2001, the Denver Post pegged the NRA’s membership at 2 million. A few months later, an NRA spokesman put the number at 4.5 million; the Columbus Dispatch and Colorado Springs Gazette put it at 3 million. What was going on here? One possible explanation comes from Richard Feldman, a former NRA lobbyist who wrote the 2007 book, Ricochet: Confessions of a Gun Lobbyist. After George W. Bush was elected, Feldman recently told Bloomberg, “there was no perceived national threat to gun ownership. The NRA’s membership dropped to under two-and-a-half million, although they never admitted it.”

Writing in 2000, when the NRA claimed to have 3.6 million members, journalist Osha Gray Davidson speculated on some of the group’s strategies for fluffing itself up:

Two years ago, David Gross, then an NRA board member, confided to me that a substantial number of the group’s 1 million Life Members are, well, dead. “There just isn’t that much incentive to go find out when someone passes away,” Gross explained. “Not when the cost of maintaining (a dead member) is minimal and when they add to your membership list.”

Who else is included in that figure of 3.6 million? I may be—although I haven’t been a member for years. Not long ago, I received an NRA form letter stating that in recognition of my previous commitment to the Second Amendment, the gun group had granted me an honorary membership. The mailing even included an NRA membership card embossed with my name.

It’s all part of the NRA’s campaign of smoke and mirrors to make itself appear more formidable in Washington, where appearance often trumps reality. The NRA leadership must offer a silent prayer of thanks to the gods of journalistic sloth and credulity every time a reporter repeats that figure of 3.6 million members and the words “record high.” 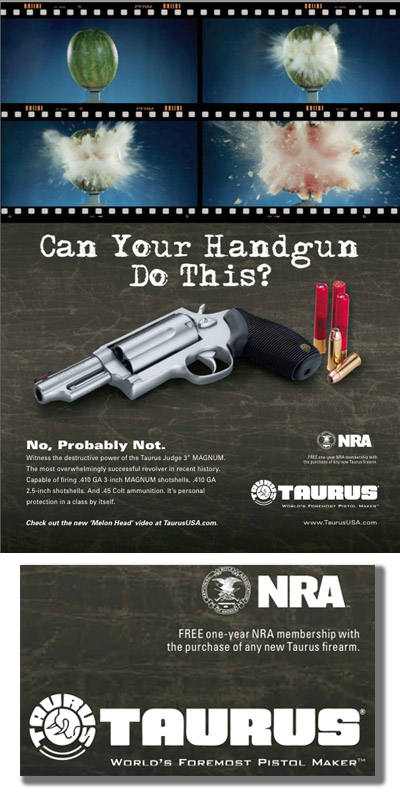 An ad for a Taurus pistol in the NRA’s American Rifleman
magazine offers free membership in the group. American
Rifleman

The NRA has boosted its membership numbers in other ways. A 2008 issue of the NRA Recruiter, a newsletter aimed at the association’s evangelists, proudly noted that weapons makers and outfitters such as Browning, Beretta, Taurus, Tactical Rifles, and Wilson Combat were offering free NRA memberships to anyone purchasing their products. The newsletter also talked up the benefits of “Join NRA, Get in Free” promotions at gun shows. “This is, by far, the most effective way to substantially increase your numbers,” it said. “…[A]ll you have to do is ‘sell the sizzle.’ People are always looking for a bargain.”

In 2008, Josh Sugarmann, executive director of the pro-gun control Violence Policy Center, came across more evidence of the NRA’s fuzzy math. He pointed to a piece of junk mail that the NRA’s treasurer had sent to members peddling a specialized insurance plan aimed at gun owners. The pitch stated that “with about 3 million NRA Members ‘on our side of the table,’ we negotiated a bargain price.” Sugarmann has an intriguing theory why this number may be more credible than the one that the NRA routinely gives the press: The underwriter for the insurance plan was in California, where making “untrue, deceptive, or misleading” statements in insurance materials is outlawed.

Last week, the NRA claimed that it had added 100,000 new members in the weeks following he Sandy Hook massacre. “Our goal is to get to 5 million before this debate is over,” a representative of the group told Politico. If all of the NRA’s numbers are to be believed, it will hit its target by this fall.

UPDATE:  A source writes in with another strong indication that the NRA’s true size is closer to 3 million. The NRA gives members a free subscription to one of four magazines: American Rifleman, American Hunter, America’s 1st Freedom, or NRA InSights. The first three magazines are audited by the Alliance for Audited Media, which as of July gave them a combined paid circulation (including newsstand sales) of 3.1 million. NRA InSights is an online-only magazine for kids, with a circulation of 25,000. Though some NRA members may opt out of a free magazine, it’s likely that others pay to subscribe to more than one of them. Add in the fact that non-NRA members can pick up the magazines on the newsstand, and the 3.1 million figure is almost certainly an upper-bound for the NRA’s true size.