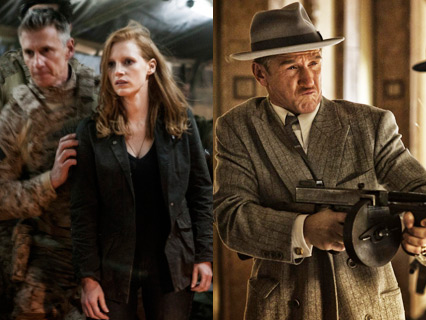 If there were ever a weekend for someone like Glenn Greenwald to avoid going to the movies lest he risk vomiting and seething with self-righteous indignation in the theater, this would be that weekend.

With Gangster Squad (Warner Bros., 113 minutes), we get a pulpy endorsement of extrajudicial killing, made all the more palatable by Ryan Gosling‘s roguish charms. Meanwhile, Zero Dark Thirty (Columbia Pictures, 160 minutes) delivers a history lesson in how America conquered Bin Laden through the sheer force of torture, with feminist overtones. Both films, which open on Friday and are rated R for “strong violence,” are inspired by actual events, both are tied to delays and real-life controversies, both features scores of composite characters, and both have acclaimed directors.

First off, I’d like to point out that I do not believe that movies or any other works of art should be condemned—or properly assessed, for that matter—purely through the prisms of moral questions. That is a lousy and dull way to consume popular culture, and if I were to adhere to such a stringent code, it would be extremely difficult to appreciate films like D. W. Griffith’s The Birth of a Nation, which is widely acclaimed for legitimate, non-white-supremacist reasons.

Having said that, you’re in for a fairly decent and reasonably engaging time at the multiplex this weekend, whatever the premium you place on human rights.

Let’s start with the one that isn’t nominated for any Oscars.

Gangster Squad is “inspired by a true story” much in the same way that most movies “inspired by a true story” are inspired by a true story: It mugs the very concept of historical accuracy (as did The Devil’s Double, The Hurricane, Frost/Nixon, American Gangster, and the rest), and has about as much connection to reality as a Kardashian wedding. The film is ostensibly based on journalist Paul Lieberman’s LA Times series “Tales from the Gangster Squad” and his subsequent book, Gangster Squad: Covert Cops, the Mob, and the Battle for Los Angeles. Lieberman colorfully documented a small LAPD unit that waged an off-the-books war against notorious gangsters like Mickey Cohen during the ’40s and ’50s. Cohen, a flamboyant, media-darling mob boss, eventually went down for tax evasion and was put in prison until the 1970s. He died peacefully in his sleep at the dawn of the Carter era.

Screenwriter Will Beall and director Ruben Fleischer saw that interesting true story and apparently said to themselves, “To hell with that! We need more explosions, bigger showdowns, and fictional characters played by Emma Stone!”

The gist of the movie is that Cohen (played with fierce, bullying joy by Sean Penn) has taken over Los Angeles and turned it into an empire of racketeering, human trafficking, gambling, and drugs. Politicians and cops live in fear—or are bought off to look the other way. LA police chief William H. Parker (Nick Nolte, growling like an indolent, crime-fighting bear) and a brave few won’t stand for it.

So they form a death squad and pick apart Cohen’s criminal network. So begins their “war for the soul of Los Angeles,” in which all warrants are served with a shotgun blast to the face.

At the head of the team are family man Sgt. John O’Mara (Josh Brolin) and Lothario Sgt. Jerry Wooters (Gosling, of course). Together with their multiracial kill-team, they break into buildings, illegally bug the crooks, and mow down henchmen by the thousands without the slightest regard for due process or any of that boring crap. (In one scene, they torture a guy to confirm the location of a criminal stronghold…which I guess is a running theme this weekend.)

And you know what? All this civil-liberties-squelching makes for some thoroughly enjoyable pop-art. (Hey, it worked for Dirty Harry.) The dialogue crackles, zazzing up the noir-glitz corniness to a point that it somehow endears, if only in a farcical way. The shootouts and raids—especially the tommy-gun-packed finale in a grand hotel, which dovetails into a rock-’em-sock-’em fist fight—bristle with the same energy and keen eye for garish colors and slo-mo that director Fleischer brought to 2009’s Zombieland.

As talented and sophisticated as the whole cast is (and as swell as it is to see Gosling and Stone play lovers on-screen yet again), it’s Penn who steals the show. The scene in which he delivers a psychotic monologue about his own personal “Manifest Destiny” is a fine example of what it looks like when an actor chews the scenery until his teeth chip. Gangster Squad is by no means a classic, but it gets the job done.

Which brings us to Zero Dark Thirty, for which I could say the same thing, albeit in a tone less praising.

But in the end, the film’s most glaring flaws have nothing to do with politics. The film succeeds as a thriller, yes. But if this is what the definitive killing-OBL movie looks like, I think we as a society might have to go straight back to the drawing board.

The films reunites Jessica Chastain and Jason Clarke (who previously costarred in the excellent Lawless), as CIA officers Maya and Dan. The big takeaway here is that Maya is emotionally tortured but also the smartest person in the room: She’s the one who eventually gets Bin Laden, while all the men around her are either too dumb or not good enough to track down America’s Enemy No. 1. Dan is a CIA torturer who wears t-shirts emblazoned with motorcycle logos and ends virtually every sentence with “bro.” (Clarke also brutally tortured and maimed his enemies as a gangster in Lawless, so really 2012 was a huge year for Jason Clarke and torture.)

Anyway, after a little waterboarding, some impressive hand-held camerawork, a whole lot of shouting between intel officials, and Tony Soprano showing up to play Leon Panetta, the most wanted man in the world winds up in a body bag by early May 2011. But for a highly anticipated film that runs at nearly three hours, the amount of ground it covers is surprisingly limited. Zero Dark Thirty completely glosses over two terms of George W. Bush, barely mentions Iraq, forgets how often we tortured innocent people, and fails to touch on some of the most interesting, cinema-ready aspects of the hunt for Bin Laden. (For starters, the CIA’s controversial DNA-collecting operation in Pakistan is barely touched on, and there is no re-creation of the hilarious tape-measure issue that befell the Navy SEAL team that took out the Al Qaeda kingpin.)

The biggest irony in watching “Zero Dark Thirty” and “Gangster Squad” side-by-side is that the latter actually has the superior sense of introspection.

As it struggles to compress a decade-long manhunt into one movie, the emotional investment feels sapped, and the ambitious scope seems unfulfilled. Character development and Chastain’s softly poignant performance take a back seat to hastily reenacting bulletpoints from recent history. It’s almost as if Zero Dark Thirty was meant to be a truly phenomenal miniseries but was instead tragically edited down to a bite-sized multiplex portion. The film has its riveting moments, and then fails as the magnum opus it has so desperately striven to become.

Now, I won’t wade too far into the “does Zero Dark Thirty inaccurately depict torture as effective?” debate that has seemingly consumed the coverage of the Oscar-nominated, award-winning movie. (My colleague Adam Serwer explores the issue sufficiently here and here.) I will say this, though: Director Kathryn Bigelow and screenwriter—and former journalist—Mark Boal explicitly draw a (patently false) link between the savage torture of Islamist detainees and finding Osama bin Laden. And that’s a hell of a thing for Boal to do, given that he began his last movie by quoting the rabidly anti-torture lefty Chris Hedges.

But the biggest irony in watching Zero Dark Thirty and Gangster Squad side-by-side is that the latter actually has the superior sense of introspection. There’s a scene toward the end of Gangster Squad when O’Mara is having a heart-to-heart with Detective Conway Keeler (Giovanni Ribisi), the Squad’s tech man. Keeler becomes noticeably queasy as he thinks back on all the laws they’ve broken, all the men they butchered who never got a fair trial. “Can you remind me the difference between us and them? ‘Cuz I can’t tell anymore,” Keeler says, verging on either tears or a panic attack.

It’s the kind of plea for absolution and outburst of regret that you never hear from the characters—or crew—of Zero Dark Thirty. The closest we get to such a thing is Chastain’s occasional sob and her understandable exhaustion.

Yes, when compared to the targeted abuses and assassinations of Zero Dark Thirty, the large-scale urban melées in Gangster Squad depict a far greater number of deaths and human-rights violations (however over-the-top and desensitized). And yet it’s the pulp-laden B-movie starring the dude from The Notebook that ends up doing the civil-liberty soul-searching—not the “brilliantly crafted” and eagerly awaited drama.