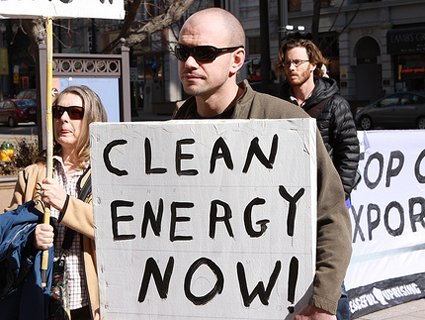 Blue Marble readers will recall the story of Tim DeChristopher, a Utah climate activist who posed as a bidder at a December 2008 Bureau of Land Management auction. DeChristopher was the highest bidder on thousands of acres of public land, much of which bordered national parks and monuments. The 27-year-old bid $1.79 million on more than 22,000 acres that he had no intention of actually buying. The government took a hard line on his act of protest, bringing him up on felony charges for mucking up the auction. DeChristopher ended up with a two-year prison sentence and a $10,000 fine.

After serving 15 months in federal prison, DeChristopher is now living in a halfway house. (He’s eligible for parole in April.) He’s also allowed to work and intended to take a job with the social justice program at the local First Unitarian Church. But the feds intervened, the Deseret News reports:

DeChristopher had been offered a job with the church’s social justice ministry, which would include working with cases of race discrimination, sex discrimination or other injustices that fall contrary to Unitarian beliefs.

“The Bureau of Prisons official who interviewed Tim indicated he would not be allowed to work at the Unitarian church because it involved social justice and that was what part of what his crime was,” [DeChristopher’s attorney Patrick] Shea said.

Yes, that’s right—DeChristopher is barred from doing anything that might be construed as acting against injustice, because that’s the whole reason they put him in jail in the first place. The newspaper reports that he’s taken a job as a clerk at bookstore instead.

See our review of a new documentary about DeChristopher and our 2009 interview with him.