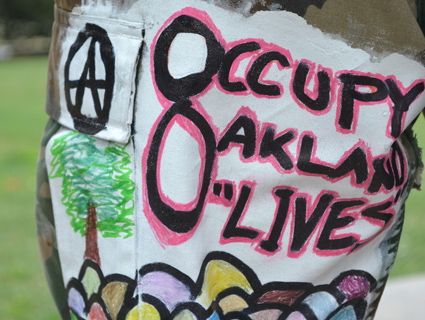 Iraq war veteran Scott Olsen showed up in a wheelchair at yesterday’s march marking the one-year anniversary of the Occupy Oakland camp raid. But this time his injury hadn’t been inflicted by police: Last week he was hit by a car while riding his bike, but it was nothing serious, he told me. Olsen became an international face of the Occupy movement last October after he was struck in the head and critically injured by a bean bag round fired by an Oakland police officer during the protest that followed the raid. In contrast to that long night in 2011, “This night has been great,” an upbeat Olsen said. “I’m glad it has remained peaceful and no one has had to go to the hospital.”

The night remained peaceful, but Oakland residents hadn’t been confident that it would be. Banks boarded up their windows. The city sent out a press release noting the $4.9 million spent policing Occupy Oakland, and the $93,000 spent restoring the lawn outside City Hall that had been destroyed by the encampment last year. An anonymous Twitter account sprang up with a profile that declared, “Occupy Oakland: Confusing Oakland for Wall Street since 2011.” It railed against black bloc vandals and tweeted that “protesting in a fiscally troubled city benefits nobody and only hurts the citizens. For what gain?”

Police turned out in force for yesterday’s protest. As an officer riding in a golf cart trailing the march repeatedly announced that “we encourage you to express yourselves in a manner respectful of other people, their property, and the city of Oakland,” a couple hundred occupiers passed by local businesses whose windows had been broken during past demonstrations.

Two people were arrested, one of whom chucked “a gigantic rock” at an officer’s chest, according to Holly Joshi, a public information officer with the Oakland Police Department. Earlier in the day, a man wearing a Ku Klux Klan robe showed up with a “God hates Occupy” sign. A few marchers wore bandanas and Guy Fawkes masks, but there was no further mischief. “This group is really just here to mark the anniversary and exercise their free speech,” Joshi told me afterward.

Last night’s anniversary aside, whether Occupy Oakland remains alive is an open question. A message posted yesterday by an anonymous group of “people who were part of Occupy Oakland from beginning to end” declared it dead, with a caveat: “The evidence is that the real work of Occupy Oakland continues in spite of the public spectacle. The housing organizing, the labor solidarity group, the anti-repression group and others can no longer pretend to be under the control or direction of the General Assembly, because that body doesn’t exist as a place where serious discussion or, more importantly, decision-making can occur.”

That sort of bottom-up activism has been one of the key strengths of the Occupy movement, said Daniel Borgström, a longtime antiwar activist who was arrested during the camp raid (and sat next to me on the police bus after we were arrested with about 400 others during an Occupy Oakland march on January 28). Other occupiers echoed his sentiment, pointing to ongoing homeless outreach and foreclosure defense efforts that sprang out of the movement. Olsen, too, has remained active with local organizing related to the Occupy movement, like the Victor Martinez People’s Library that took over an abandoned building.

“A lot of people who are still operating as Occupy have changed their focus, moving away from large actions and more to focused actions that have a direct impact on their community,” Olsen said. “I think that’s where its immediate future lies.” (Olsen is still preparing a lawsuit against the city. A recommendation from Oakland police chief Howard Jordan that two officers be fired and another 42 disciplined because of their violent mishandling of past Occupy protests, Olsen said, “was a step forward and good to see, but it’s not enough.”)

Did Borgström think Occupy Oakland was still alive? “The truth is, I don’t know, and I don’t think anybody else knows,” he told me. “I’m kind of thinking this is maybe a dress rehearsal for something in the future that may be much greater.”