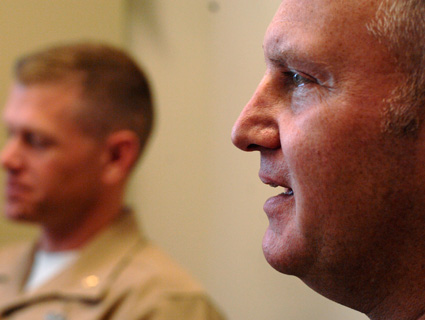 Col. Morris Davis (Ret.) was the chief prosecutor of the Guantanamo Bay military commissions in 2008, when Osama bin Laden’s former driver Salim Hamdan was convicted on charges of material support for terrorism. On Tuesday, that conviction was thrown out by a three-judge DC Circuit panel that ruled Hamdan couldn’t be tried for offenses, like material support, that weren’t war crimes when they were committed.

I reached out to Davis, now a professor at the Howard University School of Law, for his view on the verdict, because as the military commissions’ chief prosecutor he was responsible for charging Hamdan with material support for terrorism. Davis said that despite his decision at the time, he agreed with the decision to vacate Hamdan’s conviction [emphasis added]:

First off, I am pleased that the U.S. Court of Appeals for the D.C. Circuit upheld international law and the law of war. Justice O’Connor said in Hamdi that war is not a blank check for the President and it appears the D.C. Circuit said the same is true for Congress. I’m surprised that after Congress said the Military Commissions Act only codified existing law of war offenses that the Court would lift up the tent flap and take a look for themselves, but I’m glad they did.

Second, this is another body blow to the credibility of the already beleaguered military commissions. Most of the handful of cases that have been tried at Gitmo included material support for terrorism charges. David Hicks, for instance, was convicted solely of providing material support. His plea deal required him to waive all appeals, so he stands convicted of a war crime the D.C. Circuit just said was not a war crime, but he waived the right to challenge his conviction…the proverbial Catch-22.

Third, I was one of the advocates for adding material support as a chargeable offense when Congress was crafting the Military Commissions Act in the summer of 2006. I personally approved the material support charges against Hamdan and Hicks in February of 2007. I realized later on that I was mistaken on both counts. I hope this puts an end to the U.S. making up ex post facto war crimes and instead causes us to rely more on our federal courts and federal criminal code.

Davis has become a vocal critic of the military commissions since the early days of the Obama administration. He’s paid a price for that—he claims he was fired from his position with the Library of Congress in 2009 for criticizing Obama’s decision to revive the military commissions. Davis is currently suing the Library of Congress for violating his First Amendment rights. He tried to sue his former superviser in his personal capacity as well, but the DC Circuit—the same court that just overturned Hamdan’s conviction—blocked that effort.

“Hamdan has done better before [Chief Judge David Bryan] Sentelle than I have,” Davis joked.